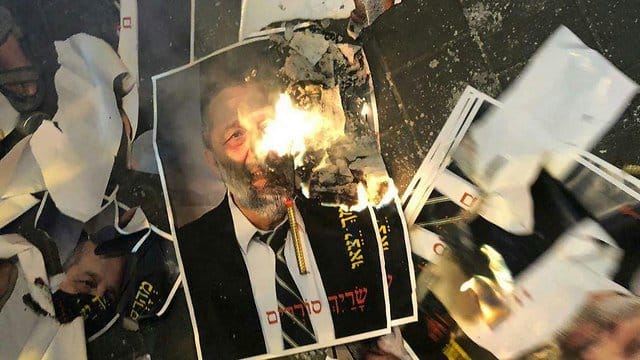 Lawmakers called for a police investigation and warned of incitement to violence late Thursday after photographs of Interior Minister Rabbi Aryeh Deri were set on fire during a demonstration against African migrants in south Tel Aviv.

Hundreds of residents of south Tel Aviv protested the ongoing presence of illegal African migrants in their neighborhood. Shefi Paz, a neighborhood activist who has been leading protests for several years, said that “Prime Minister Binyamin Netanyahu promised over a year ago that he would fix this. I was afraid to believe him. The government is trying all sorts of back-end ideas which are not working, but meanwhile we are getting hit in the face with violence and riotous behavior by these Eritreans.”

Residents have long complained that Eritrean migrants often attack them, fight among each other, roam the streets drunk, and rob the homes of Israelis. “Anyone who has seen these gangs armed with knives, rocks, and axes, who act like an army unit and fight each other, leaving their victims bleeding in the streets, realizes that these people do not belong here – and anyone who does think that is crazy,” said Paz.

Many of the activists have blamed Rabbi Deri as Interior Minister for failing to act to protect them, and at the protest several burned posters with his image on it – raising the ire of many political leaders.

“I respect the real plight of the residents of southern Tel Aviv. The government under my leadership, together with Interior Minister Aryeh Deri, is making unremitting efforts to remove the infiltrators from Israel,” said the prime minister. “I condemn the improper act of burning the picture of Minister Deri. Such acts have no place in our society,” Netanyahu added.

“A red line was crossed tonight,” said Shas MK Rabbi Michael Malkieli. “This is where the ‘slippery slope’ begins. I demand that Justice Minister Ayelet Shaked order an investigation into the incitement at this demonstration against the Interior Minister. I call on all political parties and activists who have been concerned over the fate of these illegal migrants to speak up.”

MK Yinon Azulay sent a letter to State Attorney Avichai Mandelblit, saying that “freedom of speech does not tolerate calls for murder, and especially against a government minister. The seriousness of the situation requires intervention.” Natan Elnatan, the head of the Shas party in Tel Aviv and a mayoral candidate, said that “Shefi Paz and her friends are continuing their provocations, but this time they have crossed a red line. I demand that police immediately open an investigation.”

Minister Ze’ev Elkin said that while he understood the protesters anger, “nothing justifies burning pictures of a public figure.”

Deputy Health Minister Rabbi Yaakov Litzman said, “I was shocked by the burning of the picture of my friend Rabbi Aryeh Deri. This is crossing the red line of legitimate debate that expresses wild and dangerous incitement that cannot be tolerated against a serving minister, public representative or anyone else. I call on the police to bring the perpetrators to justice. ”

The protesters called demands for a police investigation into their actions “political crocodile tears. No one called for Deri to be harmed, and instead of shedding crocodile tears, it would be better if he and his staff did his job,” a spokesperson for the group said.

In response, the protester group, which calls itself “Residents of the Central Bus Station Border Area,” a reference to one of the features of the neighborhood, said that “the government’s lack of action has made our lives unbearable. When immigration authorities, who are under the direction of the Interior Minister, begin to do their jobs and deport the illegals, we will consider apologizing for our actions. Until then we stand proudly behind our protests and our actions.”