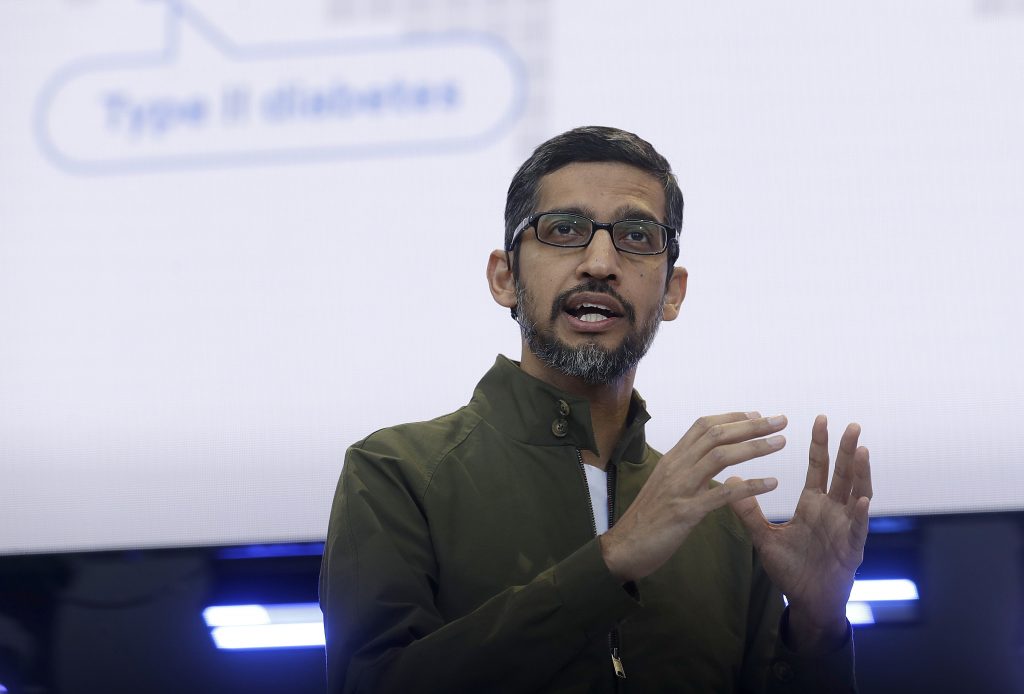 More than a dozen human-rights groups are urging Google not to offer censored internet search in China, amid reports it is planning to again provide the service in the giant market.

A joint letter Tuesday calls on CEO Sundar Pichai to explain what Google is doing to safeguard users from the Chinese government’s censorship and surveillance.

It describes the company’s secretive plan to build a search engine that would comply with Chinese censorship as representing “an alarming capitulation by Google on human rights.”

“The Chinese government extensively violates the rights to freedom of expression and privacy; by accommodating the Chinese authorities’ repression of dissent, Google would be actively participating in those violations for millions of internet users in China,” the letter says.

In a statement, Google said it has “been investing for many years to help Chinese users, from developing Android, through mobile apps such as Google Translate and Files Go, and our developer tools. But our work on search has been exploratory, and we are not close to launching a search product in China.”

In the U.S., President Donald Trump and other conservatives have lobbed charges of censorship at Google and other U.S. tech companies, though they haven’t provided evidence. On Tuesday, Trump claimed that Google had rigged search results about him “so that almost all stories & news is BAD.” A top adviser said the White House is “taking a look” at whether Google should face federal regulation. The companies deny the accusations.

The rights groups’ expression of concern over a Chinese search engine follows a letter earlier this month from more than a thousand Google employees protesting the China plans. The letter called on executives to review ethics and transparency at the company.

Google had previously complied with censorship controls starting in 2006 as it sought a toehold in the booming Chinese economy. But it exited the Chinese search market in 2010 under unrelenting pressure from human rights groups and some shareholders.

Tuesday’s letter, signed by groups including Amnesty International, Human Rights Watch and Reporters Without Borders, said China’s controls over the internet have only strengthened since then amid an overall crackdown on civil liberties and freedom of expression. The letter said it would be difficult for Google to relaunch a search engine “in a way that would be compatible with the company’s human rights responsibilities under international standards, or its own commitments.”

According to an online news site, Google created a custom Android app that will automatically filter out sites blocked by China’s so-called “Great Firewall.”

Google co-founder Sergey Brin was born in the Soviet Union in 1973 and lived there until age 6 when his family fled. He has said his experience with a repressive regime shaped his and the company’s views.

However, Pichai, who became CEO in 2015, has said he wants Google to be in China serving Chinese users.

In December, Google announced it was opening an artificial intelligence lab in Beijing, and in June, Google invested $550 million in JD.com, a Chinese e-commerce platform that is second only to Alibaba in the country. The companies said they would collaborate on retail solutions around the world without mentioning China, where Google services including Gmail are blocked.