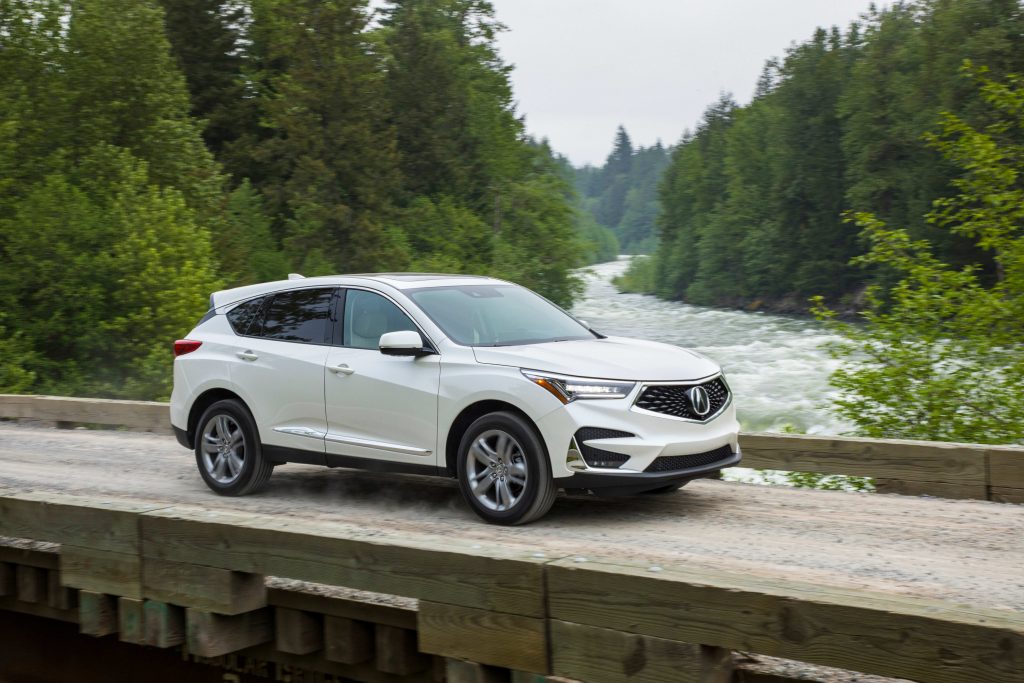 Faster, sleeker and better-handling than its predecessor, the 2019 model represents an attractive option for SUV seekers who might also be looking at the BMW X3, Audi Q5, Mercedes GLC300 or Infiniti QX50.

Highly revised for 2019, the new model features improvements all around. The turbocharged four-cylinder engine now puts out an impressive 272 horsepower and 280 pound-feet of torque.

Through a 10-speed automatic transmission, using available all-wheel drive, the SUV also sits lower to the ground, on a stiffened suspension, to make the best use of all that power.

Acura, the upscale division of Tokyo-based Honda, makes exceptionally good cars with confusingly information-free names, an alphabet soup of ILX, TLX, RLX and so on.

The SUV line is represented by the RDX and its larger, three-row MDX sibling.

The company, without advertising as heavily or drawing the same fanboy enthusiasm as its European competitors, has enjoyed success with the RDX. Acura numbers show the small SUV outselling all others in its class from January to June this year.

For much of the week, I drove the RDX, in the Special Handling All Wheel Drive Advance trim. I wasn’t quite sure what to make of it. Was it more sensible than sporty? More comfortable than compelling? One of my nieces answered the question. From the back seat one night she said, “It’s, like, an adult SUV. For grown-ups.”

That’s it exactly. The RDX is sensible and sporty, comfortable and compelling, but decidedly more of the former than the latter.

The two-row SUV’s cabin is an exercise in ambiance. The front seats on the Advance trim are adjustable 16 ways, are wrapped in Napa leather and feature three-setting seat ventilation. (Both front and rear seats are heated.) Bits of real hardwood and polished aluminum accent the appealing interior.

Headroom and legroom are business-class generous. Visibility is excellent, and the standard sunroof opens a huge window to the sky.

The 16-speaker ELS Studio 3D sound system, designed by an award – winning engineer, Elliot Scheiner, is lush. It gets an audio assist, in the form of silence, from a very quiet HVAC system and noise-canceling windshield glass.

Rolling down the road, even at freeway speed, is like driving a listening booth. The music is crisp and clean.

Around town, the little turbo toodled smartly, though I found the throttle response a little jerky and all that low-end torque a little too quick to engage. Experimenting with the four drive modes — Comfort, Snow, Sport and Sport Plus — I eventually settled on Sport Plus, using the steering wheel-mounted paddle shifters for gear selection.

On the road, the SUV behaved better. The stiffer suspension and lower ground clearance gave the RDX a sporty feel on the curving canyon roads. I could sense the all-wheel drive kicking in as I accelerated out of sharp turns, holding the road well as the turbo did its thing.

On a longer haul, conditions improved. The lovely seats and sound system made for a wonderful Highway 101 weekend getaway to Santa Cruz, and almost quieted my quibbles.

But I had some.

The RDX Advance comes standard with a suite of safety features, including adaptive cruise control, lane-keeping assist, blind-spot monitoring and rear cross-traffic alerts. This trim line also features a head-up windshield display that lets the driver’s eyes remain on the road at all times.

These technological offerings could save a life, but they lack subtlety. The cruise control, particularly, was clumsy, braking late and hard when it sensed danger ahead, then surging forward aggressively when the danger had passed.

I also struggled with the infotainment system. Acura’s engineers chose not to use a touch-sensitive screen, opting instead for a touch pad on the center console, backed up by a few more traditional buttons and switches. Perhaps, with time, one would get used to it. But after a week in the car, I was still having difficulty getting to and staying on the function I needed, growing frustrated with my inability to make the right navigation or audio selections.

The communication system, too, gave me trouble. Sometimes the phone booted up right away; other times, it wouldn’t. And the voice activation feature? I’ve had cats that paid more attention to me when I spoke.

Despite that, I’m pleased by the RDX’s sales success; it’s deserved because this is a good vehicle. Though it may not grab automotive attention like similar SUVs offered by Porsche, Jaguar, Alfa Romeo or the vehicles against which it directly competes, this slightly more anonymous Acura is a solid, sensible SUV. And unlike those European models, it’s made by Honda, which means it’s virtually bulletproof and problem-free.

For a driver whose ego doesn’t require European panache or nameplate bragging rights, it’s one of the smarter SUV choices on the market.