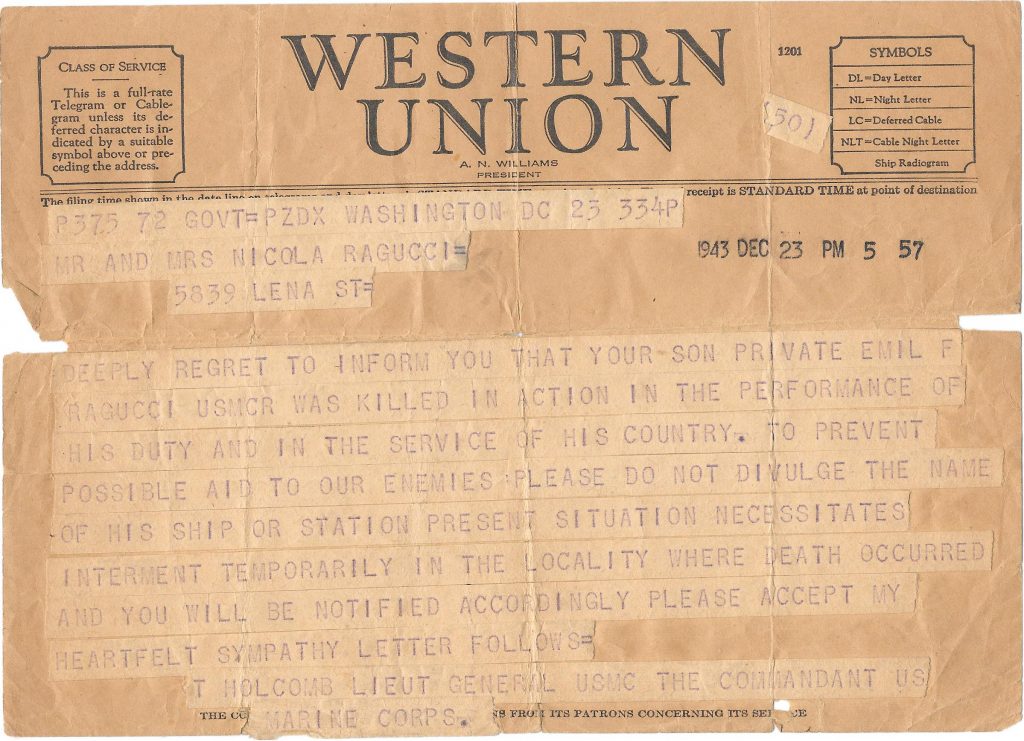 For nearly 70 years, Dominic Ragucci believed his brother Emil’s body had been swept out to sea during a World War II battle on a Pacific atoll.

But on Monday, Dominic, 86, and his brother Victor, 91, stood on a tarmac in Philadelphia to greet Emil’s remains as he finally made it home, accompanied from Atlanta by a Marine honor guard and then escorted to a funeral home by state police.

Their mother, who died many years ago, had yearned for such a day. She had buried another son who died in the war and had always hoped Emil could be returned, too.

Dominic and Victor are the last survivors of an 11-sibling family.

Five brothers fought in the war and two died less than 90 days apart. Nicholas, killed in Italy in 1944, was brought home right after the war. Emil, who died in 1943, remained lost on the Central Pacific atoll of Tarawa, where more than 1,000 Marines were killed in a three-day battle as they stormed the beach.

In 1949, the military notified hundreds of families, including the Raguccis, that their loved ones were unrecoverable, listing them as either unknown or lost at sea.

And for decades, Dominic and his siblings assumed they would never know for sure what happened to Emil.

But a little more than a decade ago, Dominic— who served in the military after World War II along with two other brothers — met a veteran who had fought at Tarawa and gave him some contact information.

A support group for descendants of Tarawa veterans was helpful. They explained that many men who died in the battle were buried in makeshift graveyards and were moved without diligent record-keeping to make way for an airstrip on the island midway between Hawaii and Australia.

But that didn’t necessarily mean Emil was buried on the island. Many men had been washed out to sea as they were gunned down getting off the boats and storming the beach.

A breakthrough came as a result of the work of History Flight Inc., a nonprofit group of forensic anthropologists, archaeologists and other volunteers formed to help repatriate the remains of American soldiers missing in action.

In 2013, they found what was labeled Cemetery 33, a small plot of land with a couple dozen sets of remains. The Department of Defense arranged to fly them to its forensic anthropology lab in Hawaii. Others would continue to be found.

Over the past few years, the lab has managed to identify roughly one person a day through a painstaking process that catalogs, pulls DNA and segregates bones and artifacts for each soldier, said Maj. Jessie Romero, a public affairs officer. The lab works on hundreds of sets of remains at a time.

Depending on the age and condition of the remains, it can be difficult to get a usable sample of DNA. The samples are sent to a facility in Dover, Delaware, where they are analyzed and compared to any samples on file from family.

Six years ago, Dominic contacted the Marines and requested a kit to submit his DNA. Last November, the Marines called to say Emil’s remains had been identified in those found by History Flight.

“I feel very bad that those boys were out there all that time unaccounted for and not appropriately attended to,” Dominic said.

Dominic was just a boy when he answered the door for a telegram at the end of the year in 1943. His older sister, Aurora, took the telegram and read it to his mother, Carmela, who had come to the U.S. from Italy with her husband Nicola and several children.

“My sister read the telegram and was horrified and screamed. And my mother just broke down,” he said.

He still has the telegram, protected by plastic.

Emil was 19 when he was sent to basic training. He had pleaded with his parents and recruited his four older brothers to persuade them to sign off on his going on active duty.

Dominic recalled his brother rattling off baseball statistics for every player from the late 1930s and 1940s. He remembered a handsome teenager, well-liked in the neighborhood, who always wanted to be a Marine.

The funeral will be Tuesday. Emil will be buried near his brother Nicholas and his parents. He would be 94 were he alive today.

“My father was bitter from a political perspective. My mother was just sad because her heart was damaged. That’s always going to be the case … Mothers get it here, they hurt here,” Dominic said, pointing to his heart.

“We were blessed in a sense. We had good parents, family that stuck together,” he said. “It’s hard to articulate how they would feel, but I think they’d be happy.”