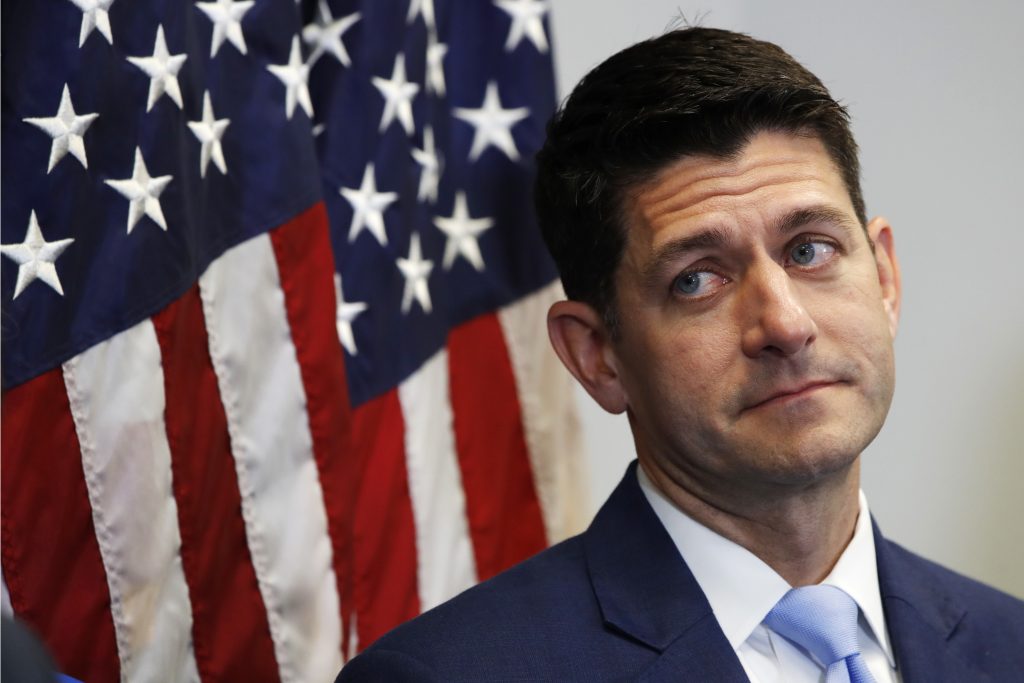 Republican House Speaker Paul Ryan is dismissing President Donald Trump’s threat to revoke the security clearances of six former top national security and intelligence officials who have been critical of his administration.

“I think he’s just trolling people, honestly,” Ryan told reporters at a news conference Tuesday, addressing what opponents and experts say would be an unprecedented politicization of the clearance process.

“This is something that’s in the purview of the executive branch,” Ryan added with a laugh.

White House press secretary Sarah Huckabee Sanders said Monday that the president was “exploring the mechanisms” to strip clearance from former CIA Director John Brennan as well as five other former officials who have held some of the most sensitive positions in government: former FBI Director Jim Comey; James Clapper, the former director of national intelligence; former CIA Director Michael Hayden; former national security adviser Susan Rice; and Andrew McCabe, who served as Trump’s deputy FBI director until he was fired in March.

The leaders have served in both Democratic and Republican administrations, including Trump’s. But at least two of the former officials, McCabe and Comey, do not currently have security clearances, making the threat moot.

Sanders accused the officials of having “politicized and in some cases monetized their public service and security clearances” by making “baseless accusations” that the Trump administration had improper contact with Russia or was influenced by Russia.

“The fact that people with security clearances are making these baseless charges provides inappropriate legitimacy to accusations with zero evidence,” she said.

Sanders did not cite specific comments made by any of the officials. But the president has been seething over the backlash to his meeting last week with Russia’s Vladimir Putin and the ongoing investigations into Russia’s meddling in the 2016 election, whether his campaign aides were involved in the effort and whether he obstructed justice.

Experts said there is some dispute about whether the president has the authority to unilaterally terminate a security clearance, but said such a move would be unprecedented and ill-advised.

“Legalities aside, it seems like a terrible mistake to use the security clearance system as an instrument of political vendettas,” said Steven Aftergood at the Federation of American Scientists’ Project on Government Secrecy.

Democratic Rep. Adam Schiff of California, a ranking member of the House Intelligence Committee, tweeted that “politicizing security clearances to retaliate against former national security officials who criticize the President would set a terrible new precedent.”

“An enemies list is ugly, undemocratic and un-American,” he added.

The threat to deny the officials access to classified information marks the latest escalation in the president’s ongoing war with the members of the U.S. intelligence community. It came hours after Republican Sen. Rand Paul of Kentucky tweeted that he would be meeting with Trump to discuss revoking Brennan’s clearance for his scathing criticism of the president’s performance at the summit with Putin.

Paul publicly raised the idea of stripping Brennan’s security clearance — and pension — during appearances on Fox News last week, where he also called Brennan “the most biased, bigoted, over-the-top, hyperbolic sort of unhinged director of the CIA we’ve ever had.”

Former CIA directors and other top national security officials are typically allowed to keep their clearances, at least for some period, as a courtesy and so they can be in a position to advise their successors. The clearances are also sometimes required to work for government contractors.

While standing next to Putin, Trump last week openly questioned his own intelligence agencies’ conclusions that Moscow tried to tip the scales of the 2016 election in his favor and seemed to accept Putin’s insistence that Russia’s hands were clean.

Brennan slammed those comments as “nothing short of treasonous” and accused Trump of being “wholly in the pocket of Putin.”

Clapper, reacting to the White House talk of revoking clearances, said on CNN that Trump’s idea was “kind of a petty way of retribution, I suppose, for speaking out against the president, which I think, on the part of all of us, are borne out of genuine concerns about President Trump.”

Hayden tweeted Monday that revoking his security clearance wouldn’t “have any effect on what I say or write.” And former Brennan deputy chief of staff Nick Shapiro said Brennan “hasn’t made one penny off of his clearance” and “doesn’t need a security clearance to speak out against the failings of Trump.”

Melissa Schwartz, a spokeswoman for McCabe, tweeted that his security clearance was deactivated when he was terminated, per FBI policy.

“You would think the White House would check with the FBI before trying to throw shiny objects to the press corps,” she wrote.

Brookings Institution legal analyst Benjamin Wittes, a Comey friend, tweeted that he’d texted with Comey and that the former FBI director told him that he no longer has a security clearance and was “‘read out’ when he left government as per normal practice.”

Wittes added that Comey “declined a temporary clearance from the (inspector general) to read the classified annex to the IG’s recent report. He didn’t want to see any classified material lest the president accuse him of leaking it.”

As for whether Trump has the authority to do what Sanders suggested, Aftergood called it “a disputed question.”

John V. Berry, an attorney who regularly represents federal intelligence agency employees, said he didn’t see any reason the president wouldn’t be able to revoke clearance but that doing so would “be terrible for America” and “totally defeat the process of defending national security.”

“If we start interjecting politics into this, our country’s going to be significantly weakened,” Berry said.

The No. 2 Republican in the Senate, John Cornyn of Texas, told reporters he can understand Trump’s aggravation but accusing the former top officials of abusing their security clearance is “a very serious allegation and I want to see what the results are.”