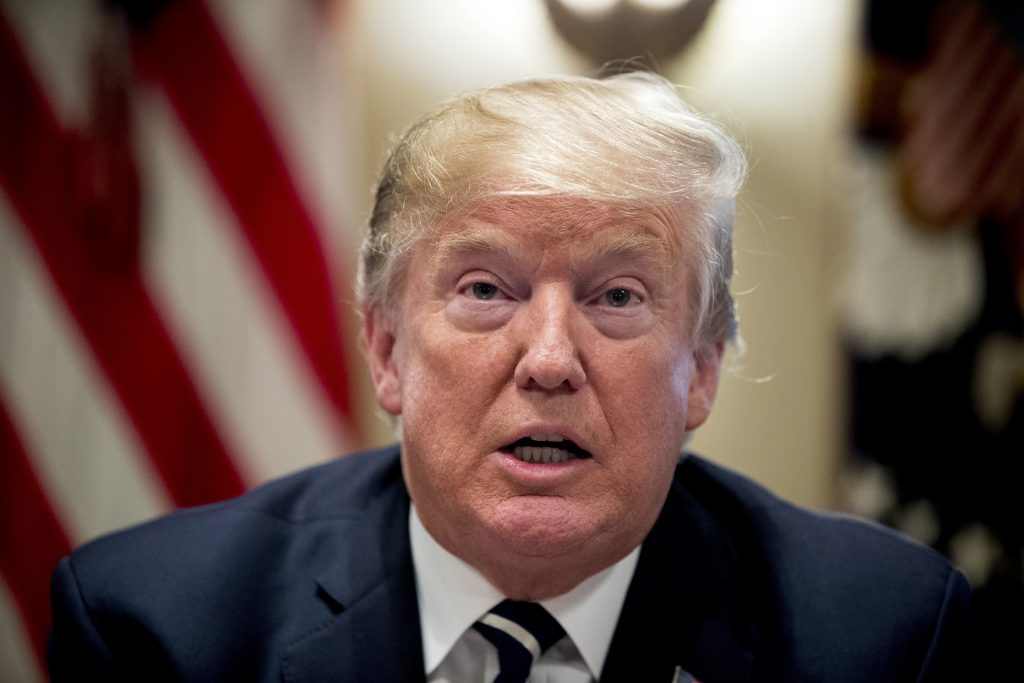 Blistered by bipartisan condemnation of his embrace of a longtime U.S. enemy, President Donald Trump sought Tuesday to “clarify” his public undermining of American intelligence agencies, saying he had misspoken when he said he saw no reason to believe Russia had interfered in the 2016 U.S. election.

“The sentence should have been, ‘I don’t see any reason why I wouldn’t, or why it wouldn’t be Russia” instead of “why it would,” President Trump said, in a rare admission of error by the bombastic U.S. leader. His comment came — amid rising rebuke by his own party — about 27 hours after his original, widely reported statement, which he made at a Monday summit in Helsinki standing alongside Russian President Vladimir Putin.

“I accept our intelligence community’s conclusion that Russia’s meddling in the 2016 election took place,” Trump said Tuesday. But he added, as he usually does, “It could be other people also. A lot of people out there. There was no collusion at all.”

“The European countries are our friends, and the Russians are not,” McConnell said.

That NATO reference carried an edge, too, since the barrage of criticism and insults he delivered in Brussels in London was hardly well-received. He dismissed it all with a new attack on an old target: the news media. He said his NATO meeting was “great” but he “had an even better meeting with Vladimir Putin of Russia. Sadly, it is not being reported that way – the Fake News is going Crazy!”

In fact, the reaction back home has been immediate and visceral, among fellow Republicans as well as usual Trump critics. “Shameful,” ”disgraceful,” ”weak,” were a few of the comments. Makes the U.S. “look like a pushover,” said GOP Sen. Bob Corker of Tennessee.

On Capitol Hill, top Republican leaders said they were open to slapping fresh sanctions on Russia but showed no signs of acting any time soon.

“Let’s be very clear, just so everybody knows: Russia did meddle with our elections,” said House Speaker Paul Ryan. “What we intend to do is make sure they don’t get away with it again and also to help our allies.”

In the Senate, Democratic leader Chuck Schumer of New York called for Secretary of State Mike Pompeo and other top officials to appear before Congress and tell exactly what happened during Trump’s two-hour private session with Putin.

Schumer also urged the Senate to take up legislation to boost security for U.S. elections and to revive a measure passed earlier by the Judiciary Committee to protect Special Counsel Robert Mueller’s investigation into Russian election interference.

But minority Democrats have few tools to push their priorities.

In the House, Democratic leader Nancy Pelosi planned a vote Tuesday in support of the intelligence committee’s findings that Russia interfered in the 2016 election.

Senators had floated a similar idea earlier, but The No. 2 Republican, Sen. John Cornyn of Texas, said sanctions may be preferable to a nonbinding resolution that amounts to “just some messaging exercise.”

Corker, the chairman of the Foreign Relations Committee, said the first step was to get Pompeo to appear, “hopefully” next week.

Trump’s meeting with Putin in Helsinki was his first time sharing the international stage with a man he has described as an important U.S. competitor — but whom he has also praised a strong, effective leader.

His remarks, siding with a foe on foreign soil over his own government, was a stark illustration of Trump’s willingness to upend decades of U.S. foreign policy and rattle Western allies in service of his political concerns. A wary and robust stance toward Russia has been a bedrock of his party’s world view. But President Trump made clear he feels that any acknowledgement of Russia’s election involvement would undermine the legitimacy of his election.

Standing alongside Putin, Trump steered clear of any confrontation with the Russian, going so far as to question American intelligence and last week’s federal indictments that accused 12 Russians of hacking into Democratic email accounts to hurt Hillary Clinton in 2016.

“I have great confidence in my intelligence people, but I will tell you that President Putin was extremely strong and powerful in his denial today.”

“He just said it’s not Russia. I will say this: I don’t see any reason why it would be,” Trump said. That’s the part he corrected on Tuesday.

His Monday statement drew a quick rebuttal from his director of national Intelligence, Dan Coats.

“We have been clear in our assessments of Russian meddling in the 2016 election and their ongoing, pervasive efforts to undermine our democracy, and we will continue to provide unvarnished and objective intelligence in support of our national security,” Coats said.

Fellow GOP politicians have generally stuck with Trump during a year and a half of turmoil, but he was assailed as seldom before as he returned home Monday night from what he had hoped would be a proud summit with Putin.

Sen. John McCain of Arizona was most outspoken, declaring that Trump made a “conscious choice to defend a tyrant” and achieved “one of the most disgraceful performances by an American president in memory.”

Kentucky Sen. Rand Paul emerged as one of the president’s few defenders from his own party. He defended President Trump’s skepticism to CBS News Tuesday, citing the president’s experience on the receiving end of “partisan investigations.”

Back at the White House, Paul’s comments drew a presidential tweet of gratitude. “Thank you @RandPaul, you really get it!” Trump tweeted.

In all, Trump’s remarks amounted to an unprecedented embrace of a man who for years has been isolated by the U.S. and Western allies for actions in Ukraine, Syria and beyond. And it came at the end of an extraordinary trip to Europe in which Trump had already berated allies, questioned the value of the NATO alliance and demeaned leaders including Germany’s Angela Merkel and Britain’s Theresa May.

In Helsinki, Putin said he had indeed wanted Trump to win the election — a revelation that might have made more headlines if not for Trump’s performance — but had taken no action to make it happen.

“Yes, I wanted him to win because he spoke of normalization of Russian-U.S. ties,” Putin said. “Isn’t it natural to feel sympathy to a person who wanted to develop relations with our country? It’s normal.”