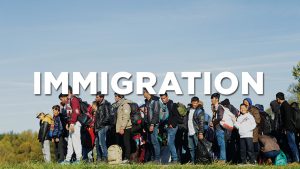 Congress’s fight over President Donald Trump’s abandoned policy of separating migrant families has stirred anew, drawing fresh attention to an issue that has divided Republicans and that Democrats hope will propel voters their way in the midterm elections.

The battling at the House Appropriations Committee on Wednesday underscored how both parties still see vast political potency in immigration, even as congressional votes have shown that partisan differences and divisions within the GOP make it unlikely anything will reach President’s Trump’s desk soon.

“We have to try to keep it up front as much as we can, because it’s important,” Rep. Jose Serrano, D-N.Y., said of Democrats’ attempts to end family separations. “The whole world is watching on this one. It’s not just us.”

Republicans on the Appropriations panel batted down Democratic proposals that undercut the administration’s “zero tolerance” policy of prosecuting and detaining migrants caught entering the U.S. One plan would have blocked money for tent cities to house unaccompanied children.

But in a tacit admission that Trump’s actions have left them politically vulnerable, the Republican-controlled committee accepted others. That included one requiring a government plan for tracking and reuniting children separated from their families and imposing a $100,000-a-day fine — imperceptible by federal standards — if it doesn’t produce one.

With roughly two dozen Democratic amendments in play, Republicans fired back with one of their own.

They won party-line approval of language letting federal officials hold children for more than 20 days when their parents face legal action for unauthorized entry to the U.S. The Trump administration wants to eliminate that court-imposed 20-day limit so it can detain entire families as it enforces its “zero-tolerance” policy.

“All it does is keep families together while we’re in the process of adjudication,” said Rep. Tom Cole, R-Okla., the measure’s sponsor.

Democrats say the administration should let such families go until they must appear in court, and say keeping children and parents in custody for such offenses is cruel, even if they’re together. Some Republicans have also opposed the idea of holding families until their cases are resolved.

“It trades one abhorrent policy for another,” said Rep. Rosa DeLauro, D-Conn.

The House committee fight was over amendments to a massive spending bill financing health, education and labor programs, a perpetually controversial measure that gets delayed every year. The GOP provision ending the 20-day limit on holding children, identical to language in one of the rejected immigration bills, would only complicate passage further.

The issue has been overshadowed in recent days by Justice Anthony Kennedy’s retirement and President Trump’s nomination of Judge Brett Cavanaugh to replace him on the Supreme Court. But Democrats are showing little interest in letting public attention fade on the separation of families.

The family separations, which have spawned virtually daily doses of heart-rending stories and pictures of weeping children and mothers, give Democrats an opportunity to repeat Trump’s denigration of immigrants. Democrats view that as a way to win over moderate voters in suburban swing districts that could determine House control in November.

The government is holding around 2,000 children apart from their migrant families and in some cases is struggling to reunite them with their parents.

In late June, U.S. District Judge Dana Sabraw in San Diego set a 14-day deadline to reunite children under 5 with their parents and a 30-day deadline for older children.

The government began with a list of 102 children potentially eligible to be reunited by the first deadline. But government attorneys have said the administration wouldn’t meet the deadline for 20 children under 5 because it needed more time to track down parents who have already been deported or released into the U.S.

Meanwhile, Rep. Mark Pocan, D-Wis., planned to introduce separate legislation to eliminate ICE — Immigration and Customs Enforcement, whose agents help enforce Trump’s policies. Under the bill, which has no chance of passage, a commission would assign its duties to other agencies.

Abolishing the agency has become a campaign rallying cry of activist liberal elements of the Democratic Party. Republicans and some Democrats see the effort as liberal overreach that will let the GOP paint Democratic candidates as extreme.