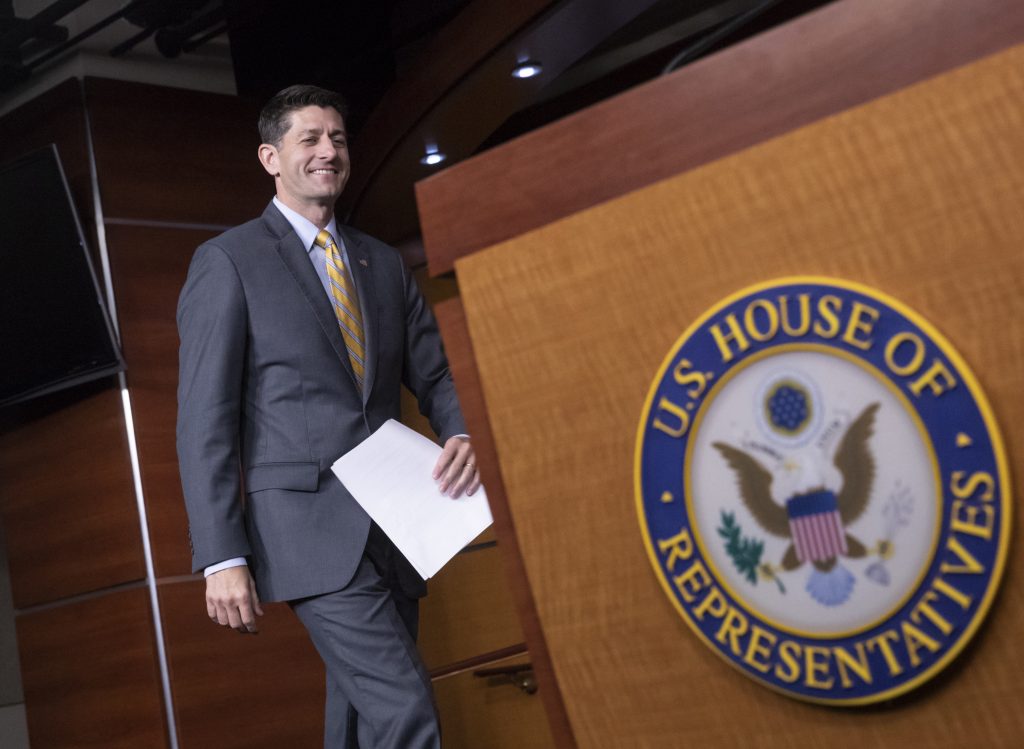 Top House Republicans are discussing legislation aimed at curbing the separation of migrant families at the border, GOP aides said Monday. The election-year response to public uproar over the Trump administration policy comes as a broader immigration package heads toward likely House defeat this week.

As showdown votes approached, President Donald Trump called anew for an end to the judicial process that currently awaits unauthorized immigrants entering the U.S. He also criticized the idea of hiring additional immigration judges to handle the huge backlogs of such cases — even though congressional Republicans have proposed just that.

“Hiring many thousands of judges, and going through a long and complicated legal process, is not the way to go – will always be disfunctional. People must simply be stopped at the Border and told they cannot come into the U.S. illegally,” Pres. Trump said in a tweet Monday with typos and misspelling of dysfunctional.

“If this is done, illegal immigration will be stopped in it’s tracks – and at very little, by comparison, cost. This is the only real answer – and we must continue to BUILD THE WALL!” he tweeted.

Amid public and bipartisan pressure, Trump last week reversed his policy of separating children from detained migrant parents. It has already resulted in up to 2,300 children being taken from parents, though the government has said 522 have already been reunited with their families.

The broad Republican immigration bill contains language curbing those separations. It would also provide money for Pres. Trump’s proposed border wall with Mexico and give immigrants brought illegally to the U.S. as children a chance at eventually becoming citizens.

But that bill faces opposition from Democrats and many Republicans and seems likely to fail.

With the plucking of migrant children from families receiving relentless press coverage, GOP lawmakers are eager to pass something that addresses the issue. Many Republicans — especially those from competitive swing districts — view the separation of families as a political albatross, though the policy has been backed by some conservatives.

The Republican aides did not provide detail of what the narrow legislation would do. But it is expected to address a federal court settlement that has forbidden the government from keeping children and families in custody for more than 20 days.

The staffers described the discussions on condition of anonymity because they weren’t authorized to speak on the record about private conversations.

Rep. Mark Meadows, leader of the hard-right House Freedom Caucus, told Fox on Monday that Rep. Cathy McMorris Rodgers, R-Wash., was working on legislation to “keep those families together” if the broader immigration bill fails. McMorris-Rodgers, a member of the House GOP leadership, faces a potentially competitive re-election bid this fall.

“Some of the things that a lot of us want to do,” said Meadows. R-N.C. “So I would think if it doesn’t pass on Tuesday night you’d see a follow-up piece of legislation within days.”

House Homeland Security Chairman Michael McCaul, R-Texas, told Fox News on Sunday, “I think we at a minimum have to deal with the family separation. I’m a father of five.”

The GOP divisions come at a bad time for the party: Elections are approaching and immigration has riveted public attention for months. Republicans who are battling to retain House control have hoped to focus this fall’s campaigns on the economy and tax cuts.

House Speaker Paul Ryan has said he prefers to see parents and children detained together: “We do not want children taken away from their parents,” he said.

The measure is the product of weeks of bargaining between party conservatives and moderates. Even so, the two GOP factions have been unable to resolve their final differences and vote-counters have yet to round up a majority. Republicans are getting no help from Democrats, who uniformly oppose the legislation.

Another obstacle to consensus for Republicans is Trump. His recent statements on their bill and history of abruptly flip-flopping on past health care and spending measures have not been reassuring.

Last Tuesday, Pres. Trump privately told House Republicans that he backed their legislation “1,000 percent” and would protect them during their campaigns, lawmakers said. By Friday, he was tweeting that “Republicans should stop wasting their time on Immigration” and wait until after the November elections, when he said the GOP would approve tougher legislation because it will gain strength in Congress. That proposition is dicey at best.

Top Republicans have wanted to hold the votes, win or lose, partly to defuse an effort by GOP moderates to force the chamber to vote on liberal-leaning bills helping immigrants win citizenship. Those measures could pass the House backed by Democrats and a few Republicans, an outcome that would enrage conservative voters.

In addition, some Republicans are eager for roll calls to show voters back home that they’ve tried to address the issue.