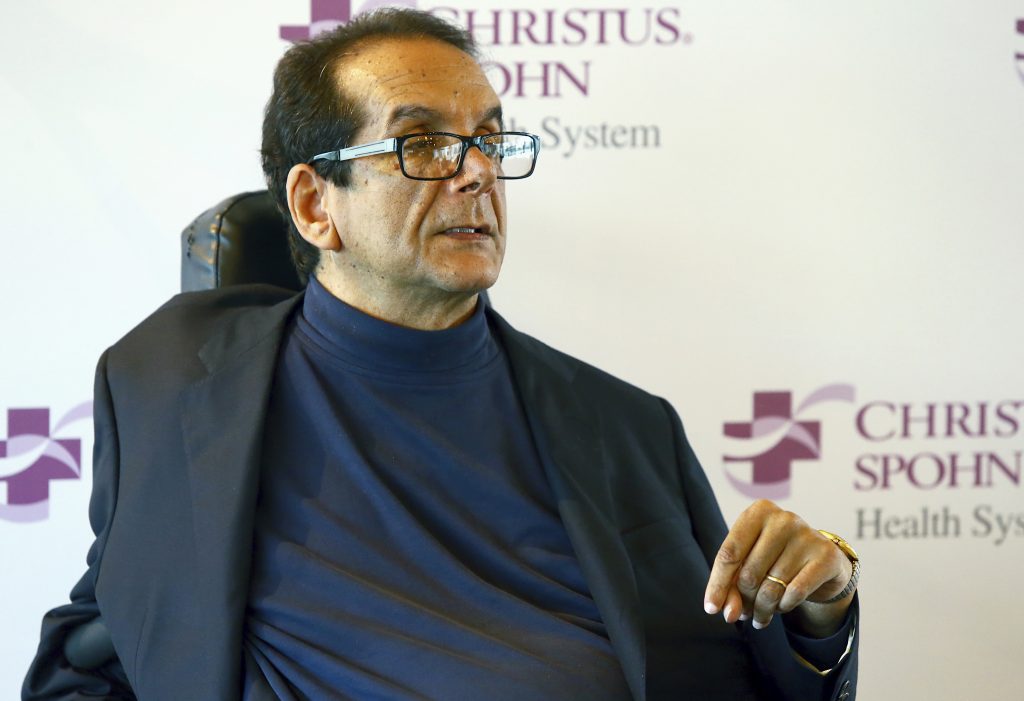 Charles Krauthammer, a Pulitzer Prize-winning Washington Post columnist and intellectual provocateur who championed the muscular foreign policy of neoconservatism that helped lay the ideological groundwork for the 2003 U.S.-led invasion of Iraq, died June 21 at 68.

The cause was cancer of the small intestine, said his son, Daniel Krauthammer. He declined to provide further information.

“I believe that the pursuit of truth and right ideas through honest debate and rigorous argument is a noble undertaking,” he wrote in a June 8 farewell note. “I am grateful to have played a small role in the conversations that have helped guide this extraordinary nation’s destiny. I leave this life with no regrets.”

A star … Dr. Krauthammer was one of the highest-profile commentators of his generation. In addition to his syndicated weekly column in The Washington Post, which garnered him a Pulitzer in 1987, he was a marquee essayist for magazines across the political spectrum, including Time, the New Republic, the Weekly Standard and the National Interest foreign-policy journal. He also was a near-ubiquitous presence on cable news, particularly Fox News.

By any measure, Krauthammer cut a singular profile in Washington’s journalistic and policymaking circles. He graduated in 1975 from Harvard Medical School — on time, despite a diving accident that left him a paraplegic — and practiced psychiatry before a restless curiosity led him to switch paths. Instead of diagnosing patients, he would analyze the body politic.

Jacob Heilbrunn, author of a book about neocons and editor of the National Interest, said in an interview that Krauthammer “crystallized conservative thought and exerted influence by setting the terms of public debate at key moments in the nation’s political life.”

Known for acerbic, unsparing prose and hawkishness on U.S. and Israeli security matters, Krauthammer long directed his moral indignation at the “liberal monopoly” on the news cycle. He was festooned with honors by right-leaning groups and sought after by Republican policymakers. Vice President Dick Cheney once praised him for his “superior intellect.”

To the left, Krauthammer was a bogeyman, most notably on the matter of President George W. Bush’s “war on terror” and the efforts to democratize the Middle East.

On Israeli-Palestinian relations, he acknowledged suffering on both sides but firmly defended the Jewish State in what he saw as its existential battle for survival. “Israel’s crime is not its policies but its insistence on living,” he wrote in a 2008 Post column. He declared international law worthless and quipped that terrorists are seldom “impressed by U.N. resolutions.”

His prolific work extended far beyond politics and foreign affairs to touch on complex social problems that he had first encountered in his medical practice. He wrote poignantly — and at times caustically — about societal treatment of the mentally ill. Many patients, released from psychiatric facilities at the urging of civil libertarians, were set adrift on the “very mean streets” because of a fantasy of “a Rockwellian community ready to welcome its eccentrics,” he wrote in Time in 1985.

“In the name of a liberty that illness does not allow them to enjoy,” he concluded, “we have condemned the homeless mentally ill to die with their rights on.”

After mass shootings, Krauthammer argued, Democratic leaders made “totally sincere, totally knee-jerk and totally pointless” calls for stricter gun-safety laws instead of addressing what he regarded as the more relevant underlying issue: the failure of families and the state to ensure effective psychiatric intervention for those who need it.

Krauthammer said his politics were shaped by growing up in the post-Holocaust years with Jewish parents who had escaped Nazi Europe. He grew up attuned to the “tragic element in history,” he once told a C-Span interviewer. “It tempers your optimism and your idealism. And it gives you a vision of the world which I think is more restrained, conservative, if you like. You don’t expect that much out of human nature. And you are prepared for the worst.”

He initially defined himself as a liberal Cold Warrior, a Democrat who embraced anti-communist as well as New Deal and Great Society programs that aided the most vulnerable. His support for the robust use of American military power gradually left him alienated from the Democratic Party, however, and he found ideological succor in neoconservatism, identifying with writer Irving Kristol’s definition of its adherents as onetime liberals who have been “mugged by reality.”

In the 1980s, Krauthammer coined the term “Reagan doctrine” to describe “overt and unashamed American support for anti-Communist revolution” in the form of proxy wars from Nicaragua to Angola. After the fall of the Soviet Union, he was credited with popularizing the phrase “unipolar moment” in commentaries that advocated solidifying American hegemony in an era when no other power came close to matching the United States in might.

His arguments found favor with the growing tide of neoconservatives in the GOP and saw their most intense expression during the first term of the Bush administration, when the president sought not only to bring to justice the perpetrators of the Sept 11. 2001, terrorist attacks but also more broadly to foster American-style democracy in the Middle East by toppling Iraqi dictator Saddam Hussein.

In the lead-up to the Iraq invasion, the Bush White House tried to gain international support by accusing Hussein of hiding weapons of mass destruction. Krauthammer was foremost among pundits who took up the president’s cause, excoriating anyone who opposed it or hesitated, from the Swedish weapons inspector Hans Blix to Secretary of State Colin Powell.

The U.S.-led invasion, which Krauthammer billed at the outset as a “Three-Week-War,” has dragged on ever since, caused more than 4,000 U.S. deaths and more than 100,000 Iraqi casualties amid a grinding insurgency, and left the United States mired in a failed state with hostile neighbors. No stockpiles of weapons of mass destruction were found.

Harold Meyerson, then a Post columnist writing in the liberal American Prospect magazine in 2005, dubbed Krauthammer “the most insistent and hectoring” of the public intellectuals who sold the war to the public by subordinating “the facts on the ground to their own ideological preferences and those of their allies within the administration.”

Krauthammer later downplayed the American abuse and torture of detainees at Abu Ghraib prison in Iraq as an aberration in “the most humane occupation in history.” He favored torture of terrorism suspects, assailing the “moral preening and the phony arguments” of those — including Sen. John McCain, R-Ariz., who endured torture as a prisoner of war in Vietnam — supporting a 2005 bill that prohibited under all circumstances the inhumane treatment of prisoners.

The noted political scientist and author Francis Fukuyama, a longtime admirer, began to accuse Krauthammer of blind triumphalism. They exchanged long, blistering, sometimes personal critiques in the pages of the National Interest that, in part, led Fukuyama to distance himself from the neocon movement.

Krauthammer took a harsh tone toward Bush’s Democratic successor. He called President Barack Obama “a man of first-class intellect and first-class temperament” but took jabs at his “highly suspect” character, citing his friendships with his “race-baiting” pastor Jeremiah Wright and the “unrepentant terrorist” Bill Ayers.

He scolded the tea party, a loud minority within the GOP that tried to force its way legislatively with government shutdowns, as the “suicide caucus.” It was one thing to be a “blocking element” in the minority, he said, but their tactics were no way to govern.

Krauthammer was apoplectic about the rise and election of President Donald Trump, calling him a “moral disgrace” for his initial refusal to fully condemn a white nationalist rally in Charlottesville and a walking “systemic stress test.”

Irving Charles Krauthammer was born in Manhattan on March 13, 1950, and, at 5, settled in Montreal with his father and mother, Jewish refugees from Europe.

In Canada, the elder Krauthammer prospered as a real estate executive. Charles, the younger of two sons, graduated first in his class at Montreal’s McGill University in 1970 with a degree in political science and economics. He then spent a year studying political theory at the University of Oxford.

Amid the ferment of student revolution on college campuses, he grew disillusioned with politics and abruptly switched course to pursue medicine. That discipline, he later wrote, “promised not only moral certainty, but intellectual certainty, a hardness to truth, something not to be found in the universe of politics.”

Physically robust in his youth, Krauthammer was a gifted sailor, skier and swimmer. The summer after his first year at medical school, he was diving from a springboard into an outdoor swimming pool in Boston when he struck his head on the concrete bottom and his spinal cord snapped. He had been studying neurology that week and said he “knew exactly what happened the second it happened.”

He spent 14 months in intensive physical therapy while also being tutored so he could complete medical school with his class. What pained him most, he told the Post, was the fear that people might evaluate him by different standards because he was in a wheelchair, with limited use of his hands.

“If I can just muddle through life, they’ll say it was a great achievement,” he said. “That would be the greatest defeat in my life — if I allowed that. I decided if I could make people judge me by the old standard, that would be a triumph and that’s what I try to do. It seemed to me the only way to live.”

The Post reported that he reached a settlement with the pool builders for about $1 million. He became chief resident of the psychiatric consultation service at Massachusetts General Hospital and an official at the federal Health and Human Services Department in Washington.

After a brief stint as a speechwriter for Vice President Walter Mondale, he joined the staff of the New Republic in 1981, received a National Magazine Award in 1984 and joined the Post the next year. His books included two essay collections, one published in 1985 and the other in 2013. He spent decades as a panelist on a syndicated public-affairs talk show.

Outside of his political thinking, he was chairman of Pro Musica Hebraica, a group that revives largely forgotten Jewish classical music on the concert stage.

In 1974, he married the former Robyn Trethewey, an artist, whom he met at Oxford. In addition to his wife, of Chevy Chase, Maryland, and their son, of San Francisco, survivors include his mother, of Rockville, Maryland.