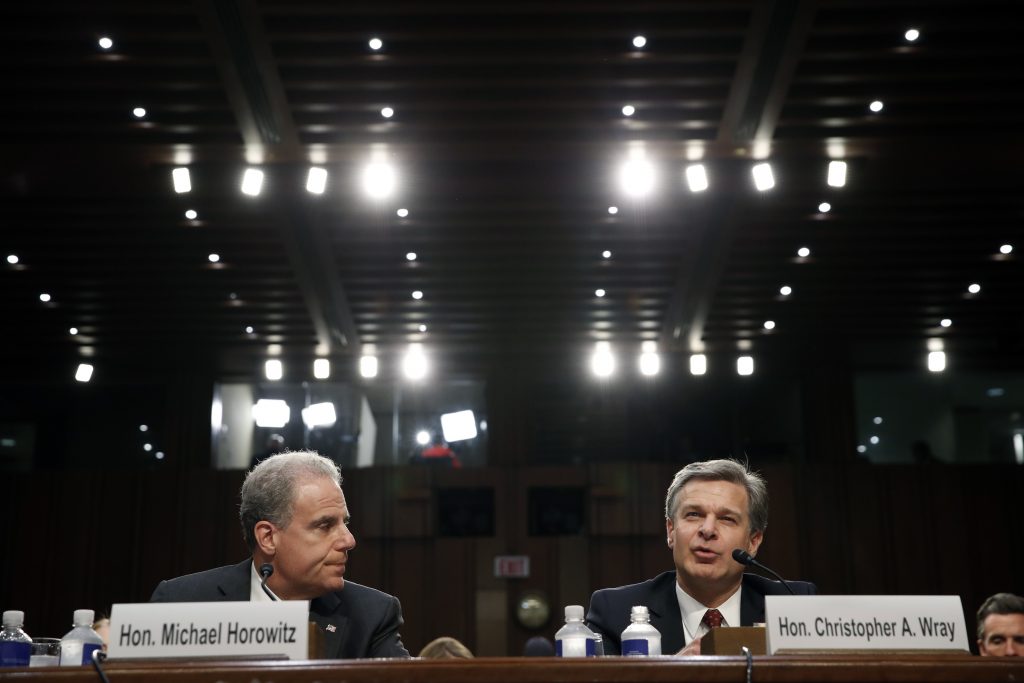 The FBI is determined to not repeat any of the mistakes identified in a harshly critical watchdog report on the handling of the Hillary Clinton email investigation, Director Chris Wray said Monday at a congressional hearing at which he repeatedly sought to distance himself from his predecessor James Comey. Justice Department Inspector General Michael Horowitz revealed at the same hearing that his office is investigating Comey’s conduct as FBI director.

Wray told lawmakers that the FBI accepted the findings of the Office of the Inspector General report and has begun making changes, including how it handles especially sensitive investigations, like the Clinton one. The FBI is also reinforcing through employee training the need to avoid the appearance of political bias, a key point of criticism in last week’s report, and has referred employees singled out in the report to the agency’s investigative arm for possible discipline.

“The OIG’s report makes clear that we have significant work to do and as I said we’re going to learn from the report and be better as a result,” Wray said, even as multiple Republicans on the Senate Judiciary Committee pounced on the report’s findings to allege rampant bias within the FBI.

Horowitz, appeared alongside Wray and repeated the report’s central conclusions that the Clinton investigation was plagued by leadership missteps but not tainted by political bias.

The report blasted FBI actions during the 2016 investigation into whether Clinton, the Democratic presidential candidate, had mishandled classified information on her private email server when she was secretary of state.

It said anti-Donald Trump text messages exchanged by FBI employees who worked on the investigation cast a cloud on the agency’s handling of the probe and damaged its reputation. It also said that fired FBI Director James Comey repeatedly broke from protocol, including when he publicly announced his recommendation against charging Clinton and when he bucked the judgment of Justice Department bosses by alerting Congress months later that the investigation was being reopened because of newly discovered emails.

Republicans, increasingly skeptical of special counsel Robert Mueller’s investigation into potential coordination between Russia and Trump’s Republican presidential campaign, said Monday they weren’t convinced by the report’s conclusion that the decision to spare Clinton from criminal charges was free from political bias, or by reassurances that the problems were limited to just a handful of employees. Trump himself had eagerly awaited the inspector general’s report in hopes that criticism of Comey and the FBI could discredit Mueller’s investigation.

“There is a serious problem with the culture at FBI headquarters,” said Utah Republican Sen. Orrin Hatch.

The Republican committee chairman, Sen. Chuck Grassley of Iowa, drew a contrast between what he said were aggressive actions taken during Mueller’s investigation and the “kid-glove treatment” that Grassley maintained had occurred during the Clinton investigation.

“The Justice Department faces a serious credibility problem because millions of Americans suspect that there is a double standard,” Grassley said. “They see a story of kid-glove treatment for one side and bare-knuckle tactics for the other. They see politics in that story.”

Though not agreeing with those characterizations, Wray said he accepted that the FBI had made mistakes and chided Comey’s judgment, saying, “There are a number of things that I probably would have done differently.” He also said he could not imagine a scenario in which he would have unilaterally announced his charging decision at a news conference, as Comey did.

The report was the culmination of a nearly 18-month investigation by the Justice Department’s internal watchdog into how the FBI handled one of the most consequential investigations in its history.

But Horowitz indicated that his work is not done: He confirmed that the office is investigating Comey’s handling of personal memos he maintained as FBI director, including one whose substance was shared with journalists by a close friend and law school professor after Comey’s May 2017 firing. He’s also investigating the origins of the FBI investigation into Trump’s campaign, including whether surveillance was conducted under improper motivations.

Asked whether the office was still investigating improper leaks, including to Trump lawyer Rudy Giuliani — who claimed to know in advance about damaging revelations against Clinton — Horowitz said, “As we note in the report, our investigative work’s still ongoing.”

Horowitz said there are lessons to be learned from the 500-page report, including about respecting an institution’s hierarchy and norms.

“No rule, policy or practice is perfect, of course,” Horowitz said. “But at the same time, neither is any individual’s ability to make judgments under pressure or what may seem like unique circumstances.”

He also called into question assertions made by Trump on Twitter before and after the report’s release, including his claim that the document exonerated him and the president’s concern that the inspector general was watering down its findings because of political pressure.

“We followed normal processes, we took comments … it was not made weaker or softer in any regard,” Horowitz said.

Horowitz said he was especially troubled by anti-Trump text messages between an FBI agent and an FBI lawyer who worked on the Clinton investigation and were both on Mueller’s team. In one August 2016 text, the agent, Peter Strzok, said, “We’ll stop it,” in reference to a possible Trump victory. The inspector general brought those texts to Mueller’s attention. Strzok was dropped from the team last summer.

Strzok’s lawyer has said his client’s actions weren’t driven by political bias and that Strzok is willing to testify before Congress.