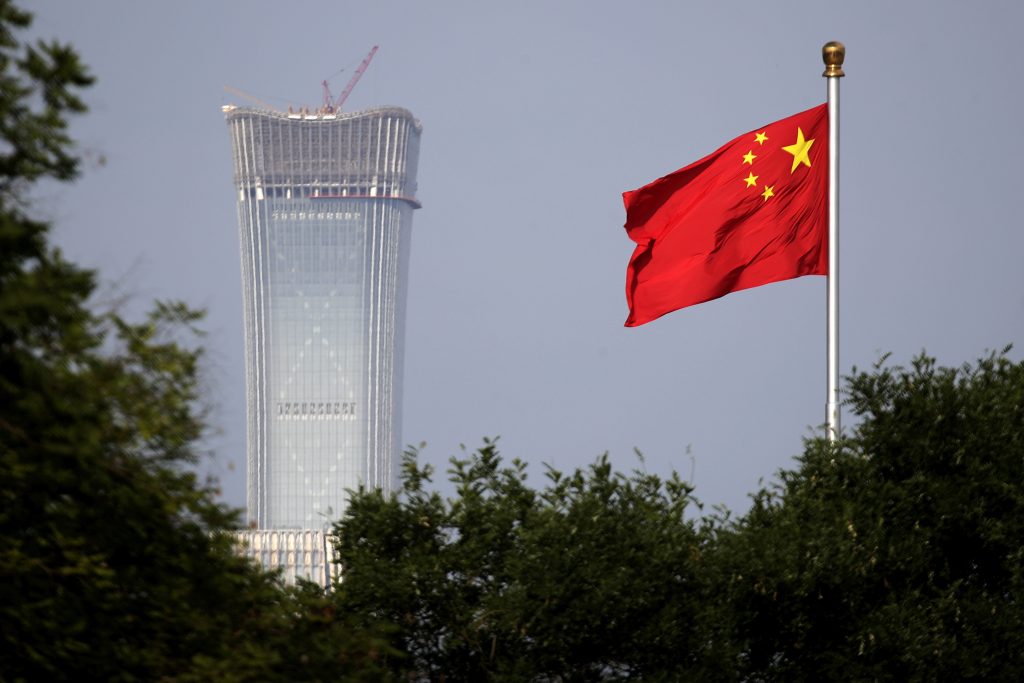 President Donald Trump has approved a plan to impose punishing tariffs on tens of billions of dollars of Chinese goods as early as Friday, a move that could put his trade policies on a collision course with his push to rid the Korean Peninsula of nuclear weapons.

Trump has long vowed to fulfill his campaign pledge to clamp down on what he considers unfair Chinese trading practices. But his calls for billions in tariffs could complicate his efforts to maintain China’s support in his negotiations with North Korea.

Trump met Thursday with several Cabinet members and trade advisers and was expected to impose tariffs on at least $35 billion to $40 billion of Chinese imports, according to an industry official and an administration official familiar with the plans. The amount of goods could reach $55 billion, said the industry official. The officials spoke on condition of anonymity in order to discuss the matter ahead of a formal announcement.

If the president presses forward as expected, it could set the stage for a series of trade actions against China and lead to retaliation from Beijing. Trump has already slapped tariffs on steel and aluminum imports from Canada, Mexico and European allies, and his proposed tariffs against China risk starting a trade war involving the world’s two biggest economies.

The decision on the Chinese tariffs comes in the aftermath of Trump’s summit with North Korean leader Kim Jong Un. The president has coordinated closely with China on efforts to get Pyongyang to eliminate its nuclear arsenal. But he signaled that whatever the implications, “I have to do what I have to do” to address the trade imbalance.

Trump, in his press conference in Singapore on Tuesday, said the U.S. has a “tremendous deficit in trade with China and we have to do something about it. We can’t continue to let that happen.” The U.S. trade deficit with China was $336 billion in 2017.

Administration officials have signaled support for imposing the tariffs in a dispute over allegations that Beijing steals or pressures foreign companies to hand over technology, according to officials briefed on the plans. China has targeted $50 billion in U.S. products for potential retaliation.

Wall Street has viewed the escalating trade tensions with wariness, fearful that they could strangle the economic growth achieved during Trump’s watch and undermine the benefits of the tax cuts he signed into law last year.

“If you end up with a tariff battle, you will end up with price inflation, and you could end up with consumer debt. Those are all historic ingredients for an economic slowdown,” Gary Cohn, Trump’s former top economic adviser, said at an event sponsored by The Washington Post.

But Steve Bannon, Trump’s former White House and campaign adviser, said the crackdown on China’s trade practices was “the central part of Trump’s economic nationalist message. His fundamental commitment to the ‘deplorables’ on the campaign trail was that he was going to bring manufacturing jobs back, particularly from Asia.”

In the trade fight, Bannon said, Trump has converted three major tools that “the American elites considered off the table” — namely, the use of tariffs, the technology investigation of China and penalties on Chinese telecom giant ZTE.

“That’s what has gotten us to the situation today where the Chinese are actually at the table,” Bannon said. “It’s really not just tariffs, it’s tariffs on a scale never before considered.”

The Chinese have threatened to counterpunch if the president goes ahead with the plan. Chinese officials have said they would drop agreements reached last month to buy more U.S. soybeans, natural gas and other products.

“We made clear that if the U.S. rolls out trade sanctions, including the imposition of tariffs, all outcomes reached by the two sides in terms of trade and economy will not come into effect,” foreign ministry spokesman Geng Shuang said Thursday.

Beijing has also drawn up a list of $50 billion in U.S. products that would face retaliatory tariffs, including beef and soybeans — a shot at Trump’s supporters in rural America.

Scott Kennedy, a specialist on the Chinese economy at the Center for Strategic and International Studies, said the Chinese threat was real and helped along by recent strains exhibited between   the U.S. and allies. “I don’t think they would cower or immediately run to the negotiating table to throw themselves at the mercy of Donald Trump,” Kennedy said. “They see the U.S. is isolated and the president as easily distracted.”

Ron Moore, who farms 1,800 acres of corn and soybeans in Roseville, Illinois, said soybean prices have already started dropping ahead of what looks like a trade war between the two economic powerhouses. “We have to plan for the worst-case scenario and hope for the best,” said Moore, who is chairman of the American Soybean Association. “If you look back at President Trump’s history, he’s been wildly successful negotiating as a businessman. But it’s different when you’re dealing with other governments.”

The U.S. and China have been holding ongoing negotiations over the trade dispute. The United States has criticized China for the aggressive tactics it uses to develop advanced technologies, including robots and electric cars, under its “Made in China 2025” program. The U.S. tariffs are designed specifically to punish China for forcing American companies to hand over technology in exchange for access to the Chinese market.

The administration is also working on proposed Chinese investment restrictions by June 30. So far, Trump has yet to signal any interest in backing away.

“I think the tariffs are coming,” said Stephen Moore, a former Trump campaign adviser and visiting fellow at The Heritage Foundation. “It really does depend on whether China makes a move to ameliorate Trump’s concerns, and so far they haven’t.”