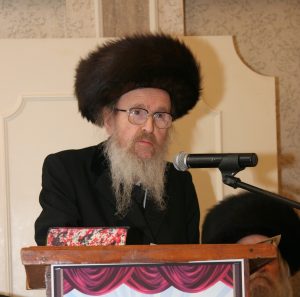 The Mattersdorfer Rav, Harav Simcha Bunim Ehrenfeld, zt”l, who was marbitz Torah to generations of talmidim as Rosh Yeshivas Chasan Sofer, which he led for decades, continuing the mesorah of the Chasam Sofer of whom he was a direct descendant, was niftar early Tuesday morning, Rosh Chodesh Sivan. He was 88 years old and had been hospitalized for several weeks.

Though arriving in the United States at a young age, growing up in the home of his father, Harav Shmuel Ehrenfeld, zt”l, the previous Mattersdorfer Rav, he absorbed the spirit of the Gedolei Rabbanim of Hungarian Jewry and the malchus of the dynasty of the Chasam Sofer and his descendants. Those who knew him testify that all aspects of the Rav’s royal bearing and deportment bespoke a sense of aristocracy from previous generations.

The Rav’s ahavas haTorah, tremendous hasmadah and mastery of Shas and Poskim provided a model of a true Gadol b’Torah for hundreds of talmidim who attended his shiurim and learned in the beis medrash of Chasan Sofer.

On Tuesday afternoon, talmidim and hundreds of Yidden who were privileged to have a connection to the Rav came from Boro Park and communities around the New York area to pay kvod acharon to the Mattersdorfer Rav. Despite it being Rosh Chodesh when hespeidim are usually not delivered, several of those who spoke made note of the Shulchan Aruch’s exception for situations of “chacham ulefanav,” a talmid chacham whose aron is at the location of the hespeidim.

“It’s impossible to weigh his loss; he was a father for the whole family,” said the Tchakaver Rebbe of Boro Park, a brother-in-law. “[The Rav was an example of] the idea that real malchus means to be a melech on oneself … all that he did was with shleimus and without any self-interest.”

The Novominsker Rebbe, Harav Yaakov Perlow, shlita, said that all the Rav’s conversations were centered on Torah.

“No matter what the topic, whatever [the Rav] spoke was divrei Torah; whether you were talking in learning or about other matters, his response was always from the Torah,” he said. “He continued the malchus and kehunah of the Chasam Sofer…[and] taught generations of talmidim, connecting them to his holy mesorah.”

A son-in-law, Harav Naphtoli Ganzvi, spoke of the Rav’s loyalty to mesorah.

“He learned that you could live as an einikel of the Chasam Sofer in America also. His whole metzius was the chinuch that he received from his father. …there was no such thing as doing something because he wanted to; he did what he felt he had to do,” he said.

The Rav was born in 1930 and spent his early years in the Austrian town of Matersdorf, where his father, Rav Shmuel, a direct descendant of the Chasam Sofer and Rav Akiva Eiger, zecher tzaddikim levrachah, served as Rav and led a prestigious yeshivah. His mother, Rebbetzin Rochel, a”h, was also a member of the Ehrenfeld family.

Following the Nazi takeover of Austria in 1938, the Mattersdorfer Rav’s position put him and his family in immediate danger. The Rav had written to family in both America and Eretz Yisrael and was resolved to go to whichever country would provide visas first. Feeling that the situation in Austria was becoming increasingly dangerous, the Ehrenfelds decided to flee to what was then Czechoslovakia even before any travel papers arrived. Nazi border guards warned the family that once they crossed the border, their lives would not be spared if they attempted to re-enter. They were struck with deep fear when the Czechs would not admit them. The family stood for a long time, trapped between the two borders and not knowing where to go. With no other option they turned to go back to Austria and were miraculously re-admitted without a word from the border patrol. The next day, visas arrived for entry to America, sparing the Ehrenfelds from the inferno that would ensue. Their salvation saved not only them but generations of Rabbanim and marbitzei Torah.

Shortly after the family arrived in America and settled on Manhattan’s Lower East Side, the Mattersdorfer Rav was approached by a parent, asking him to re-establish his famous yeshivah on their new shores. Within a short time, what would become the famous Yeshivas Chasan Sofer, named for his grandfather who was in turn a grandson of the Chasam Sofer, was established with a small core of talmidim.

Within a short time, the Mattersdorfer Rav’s young son Simchah Bunim joined the yeshivah, becoming one of its prize talmidim, spending countless hours poring over his sefarim. While primarily a talmid of his own father who instilled in him the derech halimud of Pressburg, the famous yeshivah of the Chasam Sofer and his children, he also learned for several years in the shiur of his older brother-in-law, Harav Binyomin Paler, zt”l, from whom he absorbed the lomdishe approach of Beis Brisk.

While still quite young and yet unmarried, he was appointed by his father to begin saying a daily shiur for younger bachurim.

In 1955, the Rav married Shaina Zeltenrich, daughter of Harav Shmuel Avrohom Zeltenrich, zt”l, the Tchakaver Rav of Williamsburg, a leading posek and dayan. For the many years of their marriage, the Rebbetzin invested tremendous energy into taking care of her husband’s every physical need and took great pains that he should not be distracted from his limud haTorah and harbatzas haTorah.

The couple lived for many years on the Lower East Side where the Rav became an increasingly integral part of Yeshivas Chasan Sofer, serving as the “right hand” of his father, eventually being appointed Rosh Yeshivah and moving with the mosad to Boro Park 50 years ago. In 1980, following Rav Shmuel’s petirah, Rav Simcha Bunim took on the additional mantel of the Rabbanus of Mattersdorf.

The Rav’s shiurim were a blend of traditional Hungarian-style pilpul and lamdus, often based on the chiddushim and teshuvos of the Chasam Sofer in whose works he was an exceptional expert. He also delivered regular shiurim to baalei batim in Ramban on Chumash, yet another work in which he was extremely fluent. His well-attended drashos on Shabbos Hagadol and Shabbos Shuvah demonstrated the breadth of the Rav’s knowledge as he wove together disparate sugyos in Shas.

About 30 years ago, the Rav was selected to join the Moetzes Gedolei haTorah of the Agudath Israel of America. Rabbi Chaim Dovid Zwiebel, Executive Vice President of the Agudah, told Hamodia that true to the Rav’s refined character, he was typically reserved at meetings with other Gedolim, but would be steadfast in any issue that threatened loyalty to mesorah. Rabbi Zwiebel also said that the Rav’s opinions were held in high regard by the group’s members.

From the time of his youth until his later years when the responsibilities of the tzibbur increasingly weighed on his shoulders, the Rav’s days revolved around the beis medrash of Yeshivas Chasan Sofer. He spent most of his waking hours in its walls, delivering shiurim for talmidim or learning with several chavrusos. Those who knew him testified that his mind was constantly occupied in Torah, producing a seemingly never-ending stream of chiddushim which fill countless pages. Several years ago, some of his shiurim were published in Sefer Binyan Simchah, though they represent a drop in the ocean of notes that the Rav leaves behind.

The Rav’s aura of malchus was apparent to those in his presence, and his derech eretz was extended to everyone he came in contact with, no matter how old or young, prominent or simple. He greeted those who came to him with his signature warmth and old-world charm, thus uplifting even those facing difficult situations.

“The Tatte gave over the mesorah that he had received to a new generation; that was his [source of] chayus,” said his son, Harav Dovid Aryeh, at the levayah. “Torah was what he always spoke about and he was mechadesh Torah until his very last years.”

Following the levayah in Yeshivas Chasan Sofer, the aron was scheduled to be flown to Eretz Yisrael, where additional hespedim would be delivered in Yerushalayim’s Kiryat Mattersdorf followed by kevurah on Har Hamenuchos beside the kever of his father.

The Rav is survived by, ybl”ch: his wife, Rebbetzin Sheindel Eherenfeld; sons Harav Dovid Aryeh and Harav Anshel; daughters Rebbetzin Miriam Ganzvi and Rebbetzin Sarah Horowitz; as well as many grandchildren and great-grandchildren.

Tragically, he was pre-deceased by his youngest son, Harav Akiva, z”l, who was niftar suddenly several years ago.