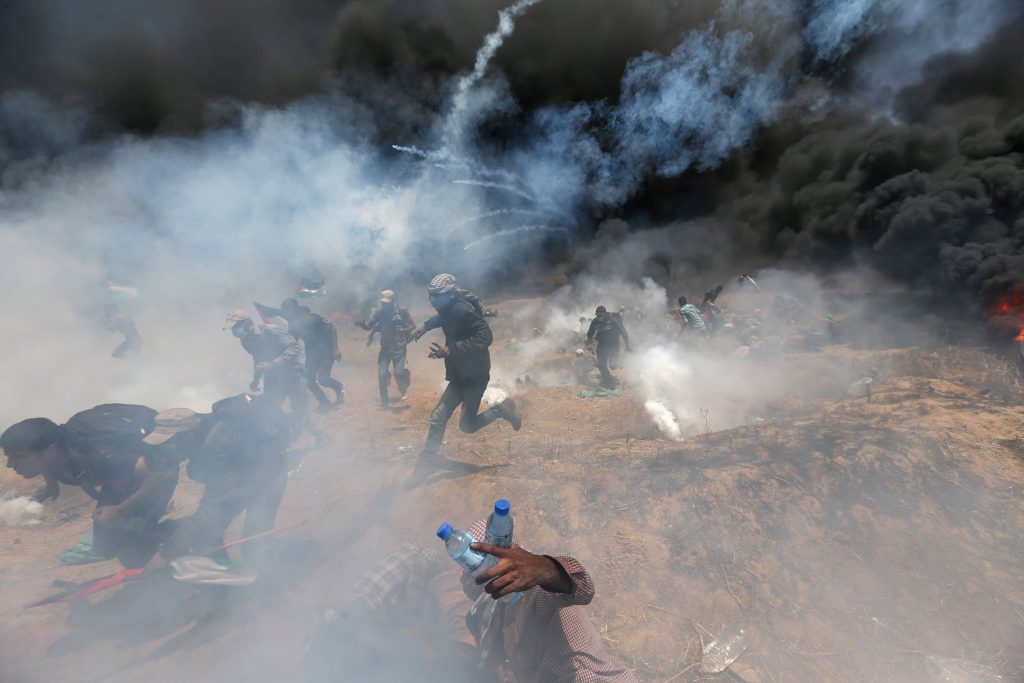 On what one would have thought would be among the most eventful days in Israeli history — the official recognition of Yerushalayim as Israel’s capital by the United States — readers of newspapers like Ha’aretz could have been forgiven for thinking that the opening of the American Embassy in the city was a side story, second to the major story of the day: The deaths of Gaza Arab rioters at the hands of IDF troops. On the website of what is considered the most respected newspaper in Israel, there were — beginning at 8 AM Israel time Monday through 8 PM — eight stories that dealt with the embassy opening, compared to 23 that dealt with the Gaza situation.

Or take a discussion on Hadashot News Monday night, which analyzed both the embassy move and the Gaza situation. Among the panelists in the discussion were two outspoken leftists (among them Peace Now’s Yariv Oppenheimer) and Arab MK Ayman Odeh (who termed the deaths of the Gaza rioters ‘a premeditated massacre’). The usual shouting and recriminations were thrown in the discussion, with the leftists saying that Israelis should not be too happy about the embassy move, as it would doubtlessly be accompanied by American demands for “painful Israeli concessions,” as one of the guests put it.

Indeed, the same schizophrenia was evident on screens earlier in the day; both Channel 1 and Hadashot News had split screens throughout much of the embassy inauguration ceremony, with one side showing the speeches by American and Israeli officials, and the other showing the violence in Gaza (from the Palestinian side, it should be noted). Even on English-language news sites in Israel, observers were treated to two top stories: “Great Day for Israel,” But “Many Dead on Palestinian Side,” or headlines to that effect.

An even worse phenomenon — cynicism — was exemplified in the revelations by Netanyahu last week of the Iranian nuclear archives; another good case in point. Here, the Prime Minister of Israel revealed that Israel had acquired tens of thousands of documents, videos, scientific papers and more — smuggled out of Iran, Israel’s arch-enemy, by Israeli agents, in what is likely one of the greatest security coups of all time. But on Channel One, the focus was not on the coup, but on the foreign officials, especially from Europe, who sought to downplay the revelations, saying that they furnished nothing new, and would in the end probably cause security risks to Israel, as it would prompt Iran to take its revenge on Israel sooner rather than later.

Other media outlets (Ha’aretz, again) termed Netanyahu’s speech a “performance,” and a bad one at that — while others (with former Prime Minister Ehud Barak supplying the soundbite) fretted that by revealing the documents, Netanyahu had somehow compromised the safety of Mossad agents — prompting the Prime Minister to make a special announcement to the effect that he had (obviously) cleared the release of information acquired by the Mossad with that organization itself.

To regular consumers of Israeli media, none of the above examples are even worthy of notice; many would call them par for the course. Israelis on the right are used to the “grim slide” attitude of various media outlets in this country. To many observers, it appears that Israel can do no right — and when it does do what appears to be right, or something “right” happens, there is something wrong with it. While it would be an exaggeration to say that the leftist media is in thrall — or in service — to the side of Israel’s enemies, the country is never really “right,” and deserves to be roundly criticized.

From whence comes what some would term this self-denigration — some would say “self-hate?” According to some rightwing commentators, the answer is very simple: It’s all because of “Bibi.” The left’s hatred of Prime Minister Biyamin Netanyahu, according to veteran Israeli newsman Boaz Shapira (he was once suspended from Channel One for broadcasting a poll that was considered too pro-Netanyahu by leftists), it is the Prime Minister who is a “bone in the throat” of the left, which has never forgiven him for beating the darling of the left, Shimon Peres, in 1996. Despite his attempts to assuage the leftist media, they refuse to cut him slack — so anything he does, which, by definition now, is what official Israel does, is no good. Others would chalk it up to ennui, a “tiredness” of fighting the world and a desire to “fit in.” Still others would chalk it up to good old fashioned Israeli cynicism.

While the “news” has always been open to interpretation and analysis, and events can be put into context in several ways, any psychologist will tell you that unending negativity has the potential to eventually seep in, a sort of long-form “brainwashing” that mars the judgement of its “subjects.” When those “subjects” are IDF soldiers, or the negative news that the media trumpets is picked up by BDS types, it’s a problem. Can anything be done about this?

That’s a question Israelis will have to answer for themselves — but perhaps they already are. According to Shapira, the media — especially in recent months — have been “smelling blood,” and believe Netanyahu (whom Shapira believes, for better or worse, to represent the ‘normal,’ patriotic Israeli) is on the ropes, due to the investigations surrounding him. As a result, the coverage of Netanyahu has gotten nastier and more bitter — but, as Shapira puts it, “the public is not buying it. One would think that the combination of the investigations, the media ‘witch-hunt,’ the public revelations about the details of his private life and the ongoing investigations, would have downed Netanyahu. But the public feels differently.” Netanyahu, it turns out, is more popular than ever — and if he is a test case for the power of the “grim slide” media to weaken the resolve of Israelis, then Israelis are apparently passing the test with flying colors.