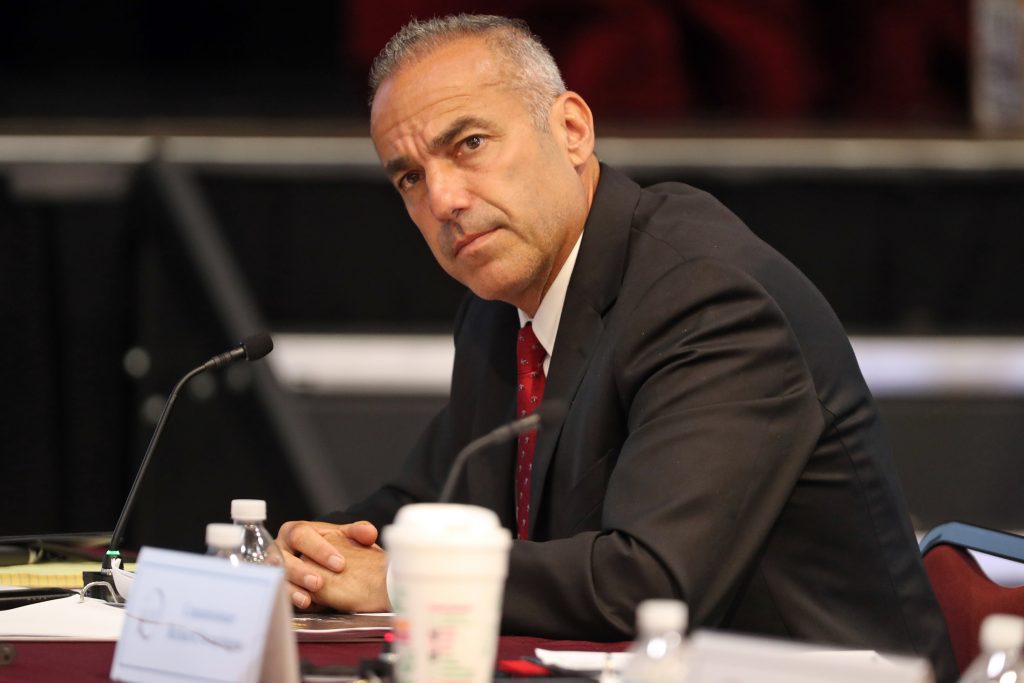 The Broward County, Fla., school district’s repeated, emphatic — and it turns out, false — statements that Nikolas Cruz had not been in a controversial disciplinary program, fit a pattern of an institution on the defense and under siege.

Facing significant legal and political exposure over the Feb. 14 shootings at Marjory Stoneman Douglas High School, the district has tried to keep information from the public, and put out untrue and misleading statements, frustrating parents who say this is the time for maximum transparency.

The district is fighting in court against the release of school surveillance video. It flatly refused to provide any records regarding the shooting to the news media, in a possible violation of the state’s open-records law. Superintendent Robert Runcie has blocked critics, including parents, from his Twitter account. More than two months after the shooting, a Broward sheriff’s detective told a state commission on school safety that he was still waiting for the district to provide all of Cruz’s disciplinary records.

The worst came last week, when Runcie acknowledged that his forceful denials that Cruz had been involved in the Promise program, which is intended to provide an alternative to the arrest of students for minor offenses, were wrong.

“It would appear that the district is more interested in protecting their programs than they are the students and teachers in our schools,” said Ryan Petty, whose 14-year-old daughter, Alaina, was killed by Cruz during his rampage through the school. “As a father, I would ask the district to please be completely transparent so we can make sure this doesn’t happen to any other children in any other schools in Florida.”

School district spokeswoman Tracy Clark said the district has provided accurate information to investigators, the press and the public as fast as possible and “any suggestion that the district is not being forthcoming is either based on a misunderstanding or misinformation.”

“The district continues to focus on responding in a timely and accurate manner to the unprecedented number of public records requests, media requests and subpoenas related to the tragedy at Marjory Stoneman Douglas High School,” she said in an email. “In addition, we have coordinated numerous interviews with employees as part of the various ongoing investigations. Both the State Attorney’s office, through the Broward Sheriff’s office, and the Public Defender’s office have been given complete copies of the records related to Nikolas Cruz that have been gathered to date.”

Andrew Pollack, whose daughter Meadow was killed in the shooting, said he was surprised to learn that the district still has not provided all of Cruz’s records to investigators. At a meeting of the state commission set up after the shooting to improve school safety, Pollack asked a Broward sheriff’s detective whether all of the records had been provided.

“I believe that some of the items we are seeking to get from the school board, we have received some,” Detective Zachary Scott said. “But I do not believe we’ve received everything yet.”

“It caught us all off guard,” Pollack said in an interview last week. “We didn’t believe it. It’s past two months now already. A lot of the people on the committee couldn’t believe it.”

From the school district, Pollack said, “there’s no honesty at all.”

Sheriff’s office spokeswoman Veda Coleman-Wright declined to say whether the school district has supplied the records and whether it is cooperating with the investigation.

School district spokeswoman Clark said the district provided investigators with all the records it could find so far.

Although the Broward Sheriff’s office has not produced every record requested by the news media, the agency has released dozens of documents, including reports of incidents at Cruz’s home and documents on its own flawed response.

But the school district has issued a blanket refusal to release any documents, including emails about the shooting among the district’s leadership and notices of intent to sue by victims and their families, despite Florida’s broad public records law.

The school district, joined by the Broward Sheriff’s Office, tried to stop the release to the media of surveillance video from the school. The district’s lawyers argued in court that the videos would threaten school security by revealing blind spots in the surveillance system.

The district partially dropped its opposition after all sides agreed to an initial release of videos that showed the inaction of a Broward sheriff’s deputy who resigned after the incident. And the district lost in court when Broward Circuit Judge Jeffrey R. Levenson ordered the release of more videos, saying any “potential harm” to the school’s security system was “outweighed by the strong public interest in disclosure.” The school district, along with the state attorney’s office, is appealing.

Questions about the Promise program had been a source of frustration for district officials, as well as students and parents. Many felt that the program had been unfairly seized upon as a distraction by conservative opponents of gun control, who preferred to focus on blundering by the district and the sheriff’s office.

At a Feb. 28 news conference, Runcie insisted that Cruz had no connection to the program. “This particular individual was never a participant in the Promise program. He wasn’t eligible for it,” Runcie said. “There’s no connection between Cruz and the district’s Promise program.” In a March 24 column in the Sun Sentinel, Runcie called the reports of a Promise connection to Cruz “fake news,” lumping them with the false charges that Stoneman Douglas survivors were “crisis actors.”

Later the standard answer developed a nuance, with Runcie claiming that Cruz had not been in the program “while in high school.”

“Once he said that comment, I knew the guy was lying and being deceitful,” Pollack said. “Once he shaded it that way, I knew it.”

Scott Travis contributed to this report.