National Pompeo: U.S. Diplomats ‘Need to Be in Every Corner, in Every Stretch of the World’
National 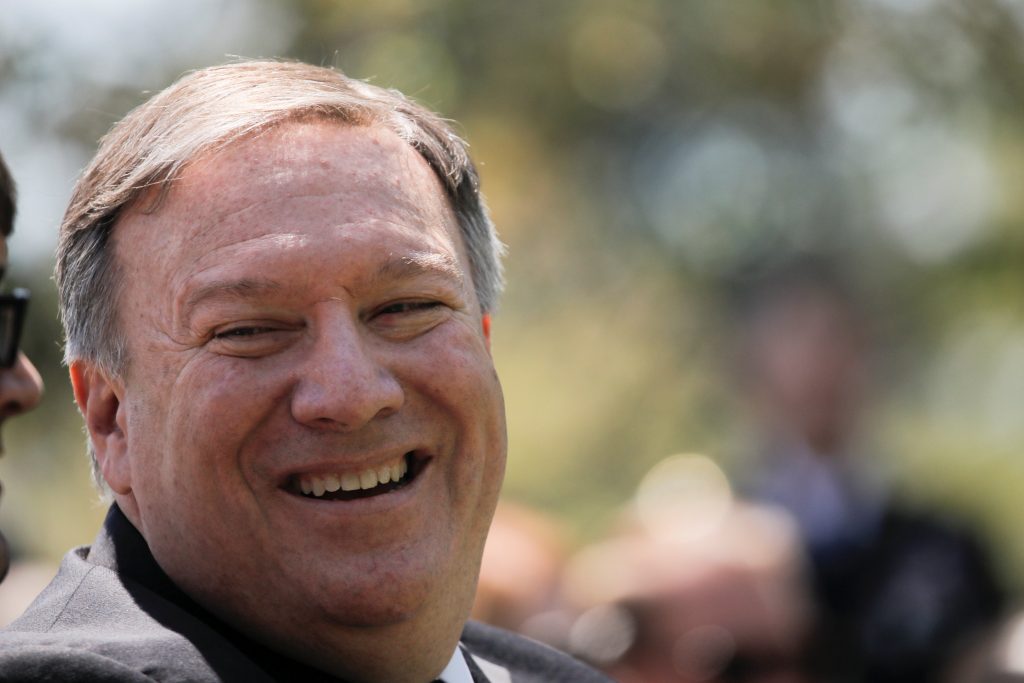 Secretary of State Mike Pompeo arrived at Foggy Bottom on Tuesday nearly a week after he was sworn in, and told employees he intends to reach out to “listen and learn” from them.

“I have a great deal to learn,” he said of the State Department, which has 74,000 employees, two-thirds of them working outside the United States. “But as people, I know who you are. You chose to be a Foreign Service officer or a civil service officer. You came here because you’re patriots.”

In an oblique reference to the frustration many employees felt under his predecessor, Rex Tillerson, Pompeo said that for the State Department to “get back its swagger,” U.S. diplomats “need to be in every corner, in every stretch of the world, executing our mission. I humbly look forward to helping you achieve that.”

Pompeo and his wife, Susan, arrived at the formal C Street entrance to the building at 1:10 p.m. Deputy Secretary of State John Sullivan, who had filled the secretary’s job temporarily for six weeks after Tillerson was fired, introduced Pompeo by calling him “a cross between George Patton and Oliver Wendall Holmes”, referring to his military background as an army tank commander and a graduate of Harvard Law School.

Pompeo said he will hold a Town Hall meeting for employees later this week or next to lay out his expectations and aspirations.

Pompeo was sworn into office last Thursday by Supreme Court Justice Samuel Alito. He delayed his introductory remarks to State Department employees so he could fly to Brussels to attend a foreign ministers’ meeting at NATO headquarters and make a Middle East swing to Saudi Arabia, Israel and Jordan.

Pompeo repeatedly joked with the diplomats he met that he had come to see them before he went to his own office and won kudos along the way for the priority he gave to meeting key allies.

In all the countries he traveled to, Pompeo paid brief visits to the U.S. embassies for “meet and greet” receptions with staff, a common activity for visiting secretaries of state. Pompeo’s predecessor, Rex Tillerson, initially skipped several ritual meet and greets, engendering some resentment among employees who often place framed photographs in their homes of themselves and their children posing with the secretary. Tillerson later made the receptions a routine. But Pompeo’s willingness to attend from the start is another sign he intends to have a different relationship with the State Department staff.

There is no independent record of what Pompeo said at the embassy events. Reporters traveling with Pompeo were allowed to watch him arrive but were ushered out of the room before he spoke.

Pompeo returned from his overseas trip Monday night. Before digging in at Foggy Bottom, he went to the White House on Tuesday to watch President Donald Trump present a trophy to the U.S. Military Academy’s football team.

Pompeo is expected to put a priority on the security of U.S. officials posted abroad.

Ever since Islamist terrorists killed four Americans in 2012 at a U.S. compound in Benghazi, Libya, Pompeo’s name has been associated with diplomatic security – but not always for positive reasons. Pompeo, as a former congressman, was a leading critic of the Obama administration’s handling of an incident many viewed in the department as tragic but overly politicized.

He fixated on former Secretary of State Hillary Clinton’s responsibility for the deaths, which included former U.S. ambassador to Libya Christopher Stevens. But when a House committee found no fault in Clinton’s actions, Pompeo and another House member issued an addendum to the report saying the State Department was “seemingly more concerned with politics and Secretary Clinton’s legacy than with protecting its people in Benghazi.”

A State Department official said Pompeo invested himself in the Benghazi attack out of concern for the safety of U.S. diplomats, and he will remain committed to their security throughout his tenure as secretary of state.

A former ambassador to Qatar, Dana Shell Smith, said members of the Foreign Service would not soon forget the role played by Pompeo in stoking unsubstantiated charges, including that the Obama administration failed to rush military assets to the attack.

“For the people who were close to Chris Stevens and had our tragedy compounded by the gross conspiracies propagated by Pompeo and others, trust will have to be earned over time,” she said in an interview.

Pompeo’s defenders say his relentless focus on the incident was driven by his concern for the security of diplomats.