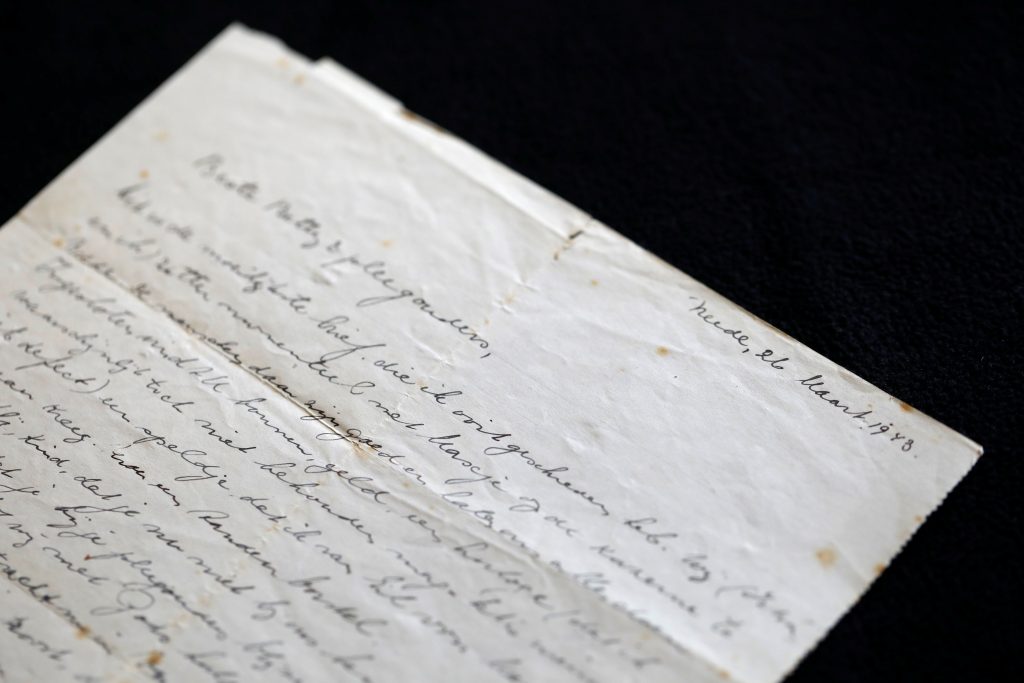 “Hope to see you in good health, a thousand kisses, mommy,” were the last words Betty’s mother wrote to her before being sent with her eight-week-old baby to their deaths at the Sobibor Nazi concentration camp in eastern Poland in 1943.

Sitting at her home with a pastoral view from a hilltop town overlooking the Mediteranean sea, 76-year-old Betty Kazin Rosenbaum read the hand-written letter in Dutch from the mother she never really got to know.

Betty keeps her mother’s original letter in her home, but she provided a scanned copy for a new digital exhibition unveiled at Yad Vashem, Israel’s Holocaust research center and museum in Yerushalayim.

After spending several years in a ghetto in Amsterdam, the family separated. In 1943, two-year-old Betty was sent to a non-Jewish foster home in the town of Eibergen in The Netherlands until the end of the war.

Her mother and eight-week-old baby brother were hidden by a family in Neede, but were betrayed by locals in the town and were subsequently sent on a train to their deaths. The father, too, according to records, was eventually sent to Sobibor.

Betty did not know who sent her the letter her mother had written, nor the postcard she wrote from the train. But the handwriting was the same as in the well-kept baby record book that she carried, along with several other articles, in a big, square blue box that she brought with her from Holland when she emigrated to Israel in 1964.

“She always wrote with a lot of hope and never depressive,” said Betty with a smile. “Here she writes mommy. It is her, and then I feel very close with her.”

Yad Vashem recently launched its third digital exhibition of letters obtained from the Holocaust, entitled “Last Letters From The Holocaust: 1943.” The exhibit “I Left Everyone at Home” includes ten handwritten letters in different languages.

The letters are mostly hopeful and optimistic.

“All those who wrote the letters and are presented online … became victims of the Holocaust. They didn’t know that when they wrote it,” said Yona Kobo, the digital curator and researcher at Yad Vashem. Their fates, she said, were all “more or less the same.”

Kobo tracked down each family of the people who wrote the letters. “Each story is different and each family is different, and that also allows us to give them back their names, their human dignity and to commemorate them,” she said.

Along with other Israelis, Betty marks the annual Israel Holocaust Memorial Day on Wednesday (April 11) to commemorate six million Jews murdered by the Nazis in World War Two.

Betty said sometimes she feels anger, but now she is focused on researching her family’s history, putting together the pieces of the puzzle and sharing her story with younger generations.

“The war years vanished, and they never told me anything. Now… there’s nobody to ask anymore and that is very painful,” she said as she looked at the fading photographs, prayer books and old, yellowing paper notes she has carried with her around the world.

According to Yad Vashem, fewer than 80,000 Holocaust survivors are still alive in Israel.