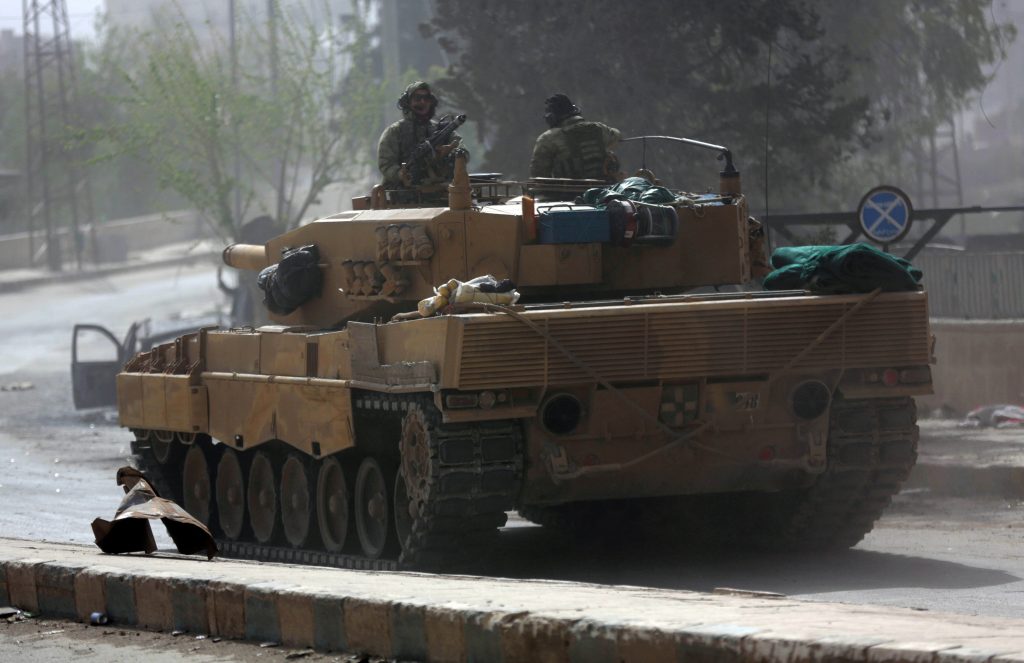 Hundreds of members of a rebel group and their relatives boarded 17 buses on Saturday in preparation to leave eastern Ghouta to opposition-held areas north of the country as part of an agreement to evacuate the second of three pockets held by opposition fighters east of the capital Damascus, Syria’s state media reported.

State media and the government-controlled Syrian Central Military Media said more than 500 fighters and their relatives will leave Saturday night toward northern Syria, and hundreds more will evacuate the following day. State media channel and SCMM earlier said that a total of 7,000 people will leave four towns in eastern Ghouta before reporting that the number had dropped to just over 3,000, without providing an explanation.

Earlier in the day, bulldozers removed giant sand barriers from a main road in the town of Harasta that will be used by the rebels and their relatives to make their way to the country’s north. After sunset, several buses carrying evacuees arrived at the edge of the town of Arbeen where they gathered before heading north.

The government-controlled SCMM said a corridor was prepared for Faylaq al-Rahman members and their relatives to leave the towns of Zamalka, Arbeen, Ein Tarma and Jobar.

The evacuations come after thousands streamed out of Harasta, the first pocket, after a similar negotiated deal for the evacuation of armed fighters and civilians. On Friday night, Harasta was void of rebels for the first time in six years.

“The city of Harasta in eastern Ghouta is free of terrorism,” SCMM said, referring to opposition fighters that the government refers to as terrorists.

Faylaq al-Rahman said in a statement Friday that the deal will lead to the immediate evacuation of sick and wounded people for treatment and to allow aid to enter the besieged area.

The group added that opposition fighters and their relatives who decide to leave eastern Ghouta will head to rebel-held parts of northern Syria while civilians who choose to stay will be guaranteed safety.

It said that Russian military police will deploy in Faylaq al-Rahman-controlled areas including Arbeen, Zamalka, Ein Tarma and Jobar. A prisoner exchange will take place between the group and the government, the group added.

Eight government supporters released by Faylaq al-Rahman told state media about the mistreatment they were subjected to while being held underground and given little food and water. One of those released, whose left eye appeared closed in the report, said “they hit me on the eye, damaging it.”

Another person released said “they used to beat us, keep us hungry and place us underground in the cold and we did not know when they would kill us.”

Syrian state media said Faylaq al-Rahman will hand over maps of underground tunnels as well as others marking mines planted by the group in areas it controlled.

On Feb. 18, a concerted military offensive, backed by Russian airstrikes, squeezed the rebels and civilians in the area under an intense bombing campaign and tightened the siege. The U.N. estimated that nearly 400,000 people remained in the enclave before the latest offensive began.

The government assault triggered a mass movement of people trying to escape the violence in the Damascus suburbs. Some have moved deeper into the rebel-held enclave, while 105,000 others have crossed the front lines toward government-controlled areas or left to rebel-held parts in northern Syria, according to state news agency SANA.

The government’s crushing offensive killed nearly 1,500 people and wounded more than 5,000, according to opposition activists.

After the departure of Faylaq al-Rahman fighters, the only rebel-held pocket in eastern Ghouta will be the town of Douma which is controlled by the powerful Army of Islam group.

On Saturday, hundreds more left Douma to government-controlled areas, including 700 government supporters whom the rebel group had been holding for years, according to SCMM.

In the rebel-held northwestern city of Idlib, a car bomb exploded near a court building killing at least six people and wounding 25, according to the Britain-based Syrian Observatory for Human Rights and the opposition’s Syrian Civil Defense.

The French presidency said in a statement Saturday that President Emmanuel Macron spoke by phone with his Turkish counterpart Recep Tayyip Erdogan the day before and the French leader said he “had very clearly expressed” his concerns as soon as the Turkish military operation in the Kurdish Syrian enclave of Afrin started.

“Nothing must lead to weakening the pressure” on what is left of the Islamic State group in Syria and Iraq, Macron said.

Turkey launched an operation in Afrin to clear it of Syrian Kurdish militia, which Turkey considers to be a security threat, on Jan. 20. It captured the town of Afrin in a major phase of the offensive on Sunday.

Turkey’s official Anadolu news agency cited the army Saturday, saying “complete control” has been established in the Afrin region. It said the military was continuing its sweep for mines and explosives to allow Afrin’s residents to return.

Macron agreed with Erdogan to pursue “deep and intense” discussions in coming days about Syria, the French presidency’s statement added.