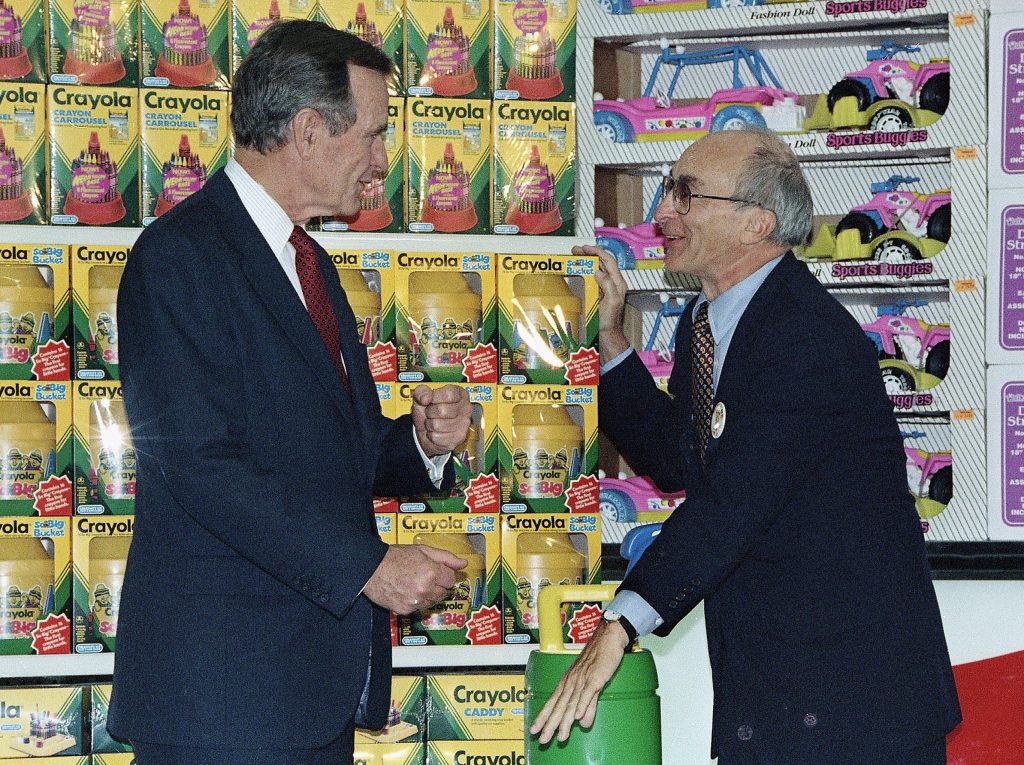 Charles Lazarus, who combined supermarket-style service with touches of whimsy in creating Toys “R” Us, a longtime retail success that fought high debt and fierce competition and finally succumbed just last week, has died. He was 94.

He died Thursday in Manhattan, Michael Goldstein, a close friend who was the company’s former chairman, said in a phone interview. Amy von Walter, a spokeswoman for Toys “R” Us, said the news adds to the chain’s “many sad moments” recently, but she added that the company “will forever be grateful for his positive energy, passion for the customer and love for children everywhere.”

Unable to fend off rivals while saddled with more than $5 billion in debt, the company filed for bankruptcy in September 2017 and in recent days began closing down its U.S. and U.K. operations while attempting to reorganize and sell its remaining international units. The chain includes more than 1,600 Toys “R” Us and Babies “R” Us stores in 38 countries.

From the first Toys “R” Us outlet, opened in 1957 in the Maryland suburbs near his hometown of Washington, Lazarus stuck to a winning formula of high volume, discounted prices and cookie-cutter predictability.

As much as anyone, he transformed the toy business from holiday-focused to year-round. Delighted manufacturers ran proposed products by his company before committing to wide-scale production, according to a 1986 article in Atlantic Monthly magazine. His strategy created the world’s largest toy-store chain.

Lazarus led the New Jersey-based company — now based in Wayne — through its 1966 sale to Interstate Department Stores Inc. and through Interstate’s bankruptcy in 1974, which resulted in Toys “R” Us emerging as the surviving company and going public in 1978.

Since Lazarus stepped down as chief executive officer in 1994 and chairman four years later, the company has faced new competition from online retailers such as Amazon.com Inc. and from the rise of Wal-Mart Stores Inc., which overtook it in U.S. toy sales in 1998.

Bain Capital LLC, KKR & Co. and Vornado Realty Trust took over Toys “R” Us in a $7.5 billion leveraged buyout in 2005. In 2009, the toymaker acquired FAO Schwarz and its flagship Fifth Avenue store in Manhattan. That store closed in 2015, a victim of rising rent.

As his chain expanded, Lazarus emphasized dependability over novelty. The 18,000-plus toys for sale at any given time were the same in each store. Decisions on which items to stock, and how to display them, were made at corporate headquarters.

“There’s an enormous opportunity in America if you’re willing to make a commitment to inventory,” Lazarus said.

Lazarus added personal touches such as the backward R in the store’s name — “to give the impression that a child wrote it,” according to a company history — and Geoffrey the Giraffe, the chain’s mascot. Diapers were sold at deep discounts, encouraging parents to spend their savings on toys.

Lazarus earned more than $60 million in 1987, according to Forbes magazine, making him No. 1 in its ranking of highest paid executives. Stock options accounted for about $56 million.

In August 2013, Lazarus sold his duplex at 960 Fifth Avenue in Manhattan for $21 million to Peruvian billionaire Carlos Rodriguez-Pastor.

Charles Phillip Lazarus was born Oct. 4, 1923, in Washington, the son of Frank and Fannie Lazarus. From an early age he helped his father refurbish broken bicycles and sell them.

“I always wondered why we didn’t sell new bicycles,” he said. “My father said it was because the big chain stores could sell them so much cheaper than we could.”

In 1948, following military service during World War II as a cryptographer, he took over his father’s store and replaced the bicycles with baby furniture. He switched again, to toys, to get customers to return more frequently.

“Toys are a great kind of thing to sell, because they don’t last that long,” he said.

He called his store Children’s Supermart, with the Rs rendered backward. In the late 1950s, “motivated by the success of emerging self-service grocery supermarkets,” according to the company history, he adopted a similar model — long lanes of products, carts for customers.

When he opened his first toys-specific store, in Rockville, Maryland, he went with a shorter name, Toys “R” Us, to maximize the size of letters on the highway sign.

In 1966, with his four Washington-area stores totaling $12 million in annual sales, Lazarus sold the company to Interstate Stores for $7.5 million in cash, remaining as head of Interstate’s toy division.

He opened 43 new store branches in the next eight years. Interstate didn’t fare as well, filing for bankruptcy protection in 1974. When it emerged in 1978 as Toys “R” Us, a public company, Lazarus was CEO.

Lazarus’s death as Toys “R” Us teeters on the brink of existence was “surreal,” said Goldstein, the company’s former chairman. When Lazarus and Goldstein talked in recent months while Lazarus wasn’t well, they would reminisce about “having a good run,” Goldstein said. He added that their only regrets were employees who would be losing their jobs, suppliers who would be losing their best customer and all the kids who won’t grow up with Toys “R” Us.