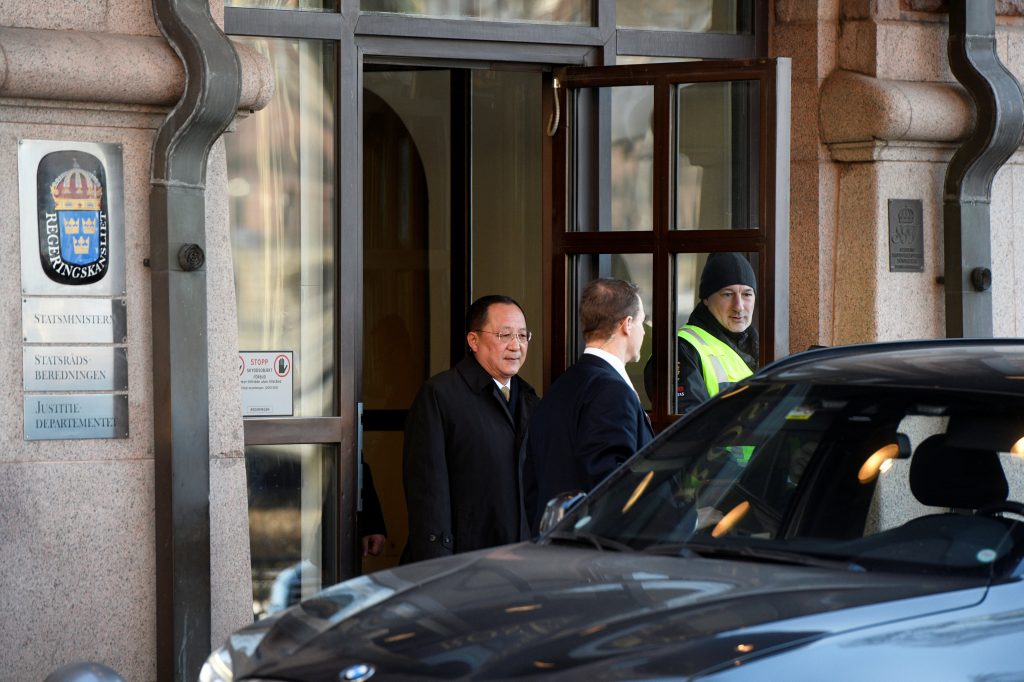 North Korea’s foreign minister met with his Swedish counterpart Thursday after making a surprise trip to Stockholm that has fueled speculation about a meeting between President Donald Trump and North Korean leader Kim Jong Un.

Foreign Minister Ri Yong Ho landed at Stockholm’s Arlanda Airport on a direct flight from Beijing and spent several hours at the Swedish Foreign Ministry before returning to the North Korean Embassy.

Sweden has had diplomatic relations with North Korea since 1973 and is one of the few Western countries with an embassy in Pyongyang. It provides consular services for the United States in North Korea.

“If the key actors want Sweden to play a role, facilitate [talks], be a forum or a link or whatever it may be, then we are prepared to do that,” Prime Minister Stefan Lofven told Sweden’s TT news agency Thursday.

“We shouldn’t be naive and believe it is Sweden that solves these problems,” Lofven added.

Sweden’s Foreign Ministry said the talks between Wallstrom and Ri “will focus on Sweden’s consular responsibilities as a protecting power for the United States, Canada and Australia,” but also will address the security situation on the Korean Peninsula.

The ministry referred to the U.N. Security Council’s condemnation of North Korea’s nuclear weapons and missile programs, saying the U.N. “emphasized the need for intensified diplomatic efforts to find a peaceful solution to the conflict.”

Ri, a former diplomat in Stockholm and London and an ex-nuclear envoy with experience negotiating with rivals South Korea and the United States, was tapped as Pyongyang’s foreign minister in 2016.

In a letter to U.N. Secretary-General Antonio Guterres last month, he urged the United Nations not to remain silent about what he called “the U.S. dangerous game of aggravating [the] situation in and around the Korean Peninsula and driving the whole world into a possible disaster of nuclear war.”

The trip by Ri is being closely watched because there remains a huge amount of preparation that needs to be done and relatively little time before Kim is supposedly planning to sit down for summits with Presidents Moon Jae-in and Trump.

President Trump has agreed to meet Kim by May. So far, North Korea has yet to publicly comment on what it hopes to gain from the summits, adding an extra element of mystery and skepticism.

Sweden has been rumored as a possible site for the summit between Kim and Trump, though a truce village on the South Korean side of the Demilitarized Zone between the Koreas is seen as more likely.

Senior South Korean officials who traveled to Pyongyang earlier this month and met with Kim say he is willing to discuss the North’s nuclear weapons program.

It could suggest a potential breakthrough, or a fallback to the North’s longstanding position that it’s willing to get rid of its nuclear weapons if the United States guarantees its safety.

In the past, that has meant Washington would have to withdraw all of its troops from South Korea, a condition no U.S. president has been willing to consider.

Niklas Swanstrom of the Stockholm-based Institute for Security and Development Policy said the meeting between the two foreign ministers would only be preliminary to higher-level talks but they could give an indication of North Korea’s interests and demands.

“The assumption is of course that [they] will speak a bit about the proposed talks between Donald Trump and Kim Jong Un,” Swanstrom told The Associated Press.

He said he did not expect the announcement of a date or location for a Trump-Kim meeting.