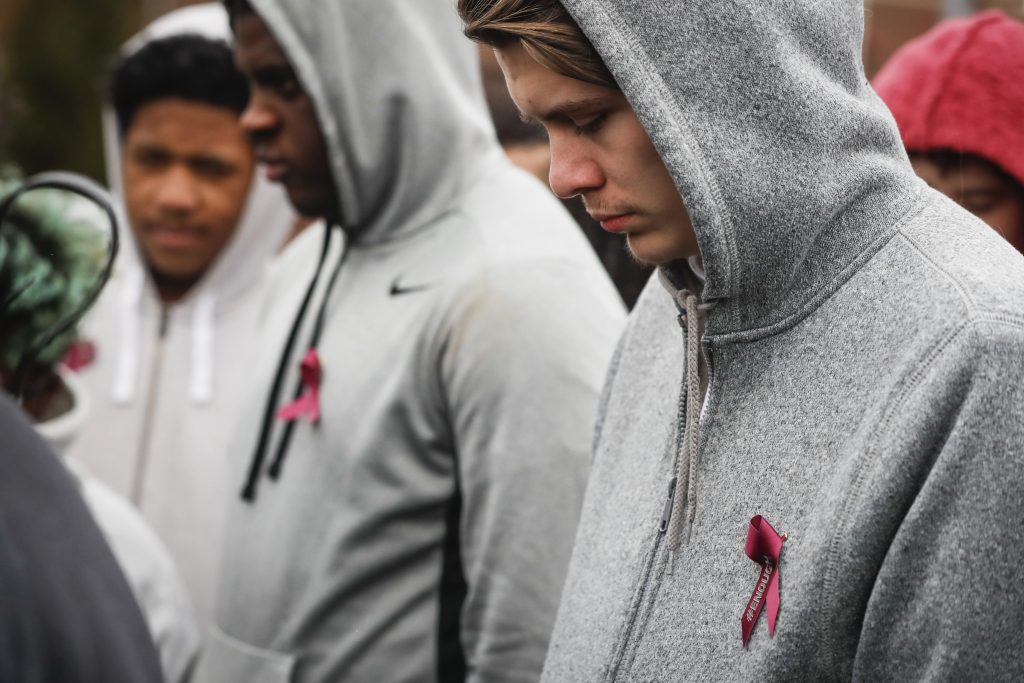 Young people in the U.S. walked out of school to demand action on gun violence, Wednesday, in the biggest demonstration yet of the student activism that has emerged since the massacre in Florida.

More than 3,000 walkouts were planned across the country and around the world, organizers said.

Students were urged to leave class at 10 a.m. local time for 17 minutes — one minute for each of the dead in the Feb. 14 shooting at Marjory Stoneman Douglas High School.

Max Poteat, a student who helped organize a walkout at North Carolina’s East Chapel Hill High School, said he was struck by the emotional weight of the moment.

“I think halfway through it really hit me, and I think everyone around, that these are teenagers just like us and that their lives were taken innocently — and that time is needed for change,” he said.

Thousands of students gathered on Pennsylvania Avenue in front of the White House, holding colorful signs and cheering in support of gun control. The students chanted, “Hey, hey, ho, ho. The NRA has got to go!” President Donald Trump was in Los Angeles at the time.

Stoneman Douglas High senior David Hogg livestreamed the walkout at the tragedy-stricken school in Parkland, Florida. Walking amid a mass of people making their way onto the football field, he criticized politicians for not taking more action to protect students.

He said the students could not be expected to remain in class when there was work to do to prevent gun violence.

From Florida to New York, students poured out of their schools, marching through the streets or gathering on campus to demonstrate.

At other schools, students created symbols to try to represent the tragedy. At Cooper City High, near Parkland, students gathered around 14 empty desks and three podiums arranged in a circle outside the school, representing the 14 students and three faculty members killed in the shooting. The students then released 17 doves from a box.

Some schools applauded students for taking a stand or at least tolerated the walkouts, while others threatened discipline.

About 10 students left West Liberty-Salem High School — which witnessed a shooting last year — despite a warning they could face detention or more serious discipline.

The coordinated walkout was organized by Empower, the youth wing of the Women’s March, which brought thousands to Washington last year.
Although the group wanted students to shape protests on their own, it also offered them a list of demands for lawmakers, including a ban on assault weapons and mandatory background checks for all gun sales.

Historians said the demonstrations were shaping up to be one of the largest youth protests in decades.

“It seems like it’s going to be the biggest [of] youth-oriented and youth-organized protest movements going back decades, to the early ’70s at least,” said David Farber a history professor at the University of Kansas who has studied social change movements.
“Young people are that social media generation, and it’s easy to mobilize them in [a] way that it probably hadn’t been even 10 years ago.”

Other protests planned in coming weeks include the March for Our Lives rally for school safety, which organizers say is expected to draw hundreds of thousands to the nation’s capital on March 24. Another round of school walkouts is planned for April 20, the 19th anniversary of the Columbine High shooting in Colorado.