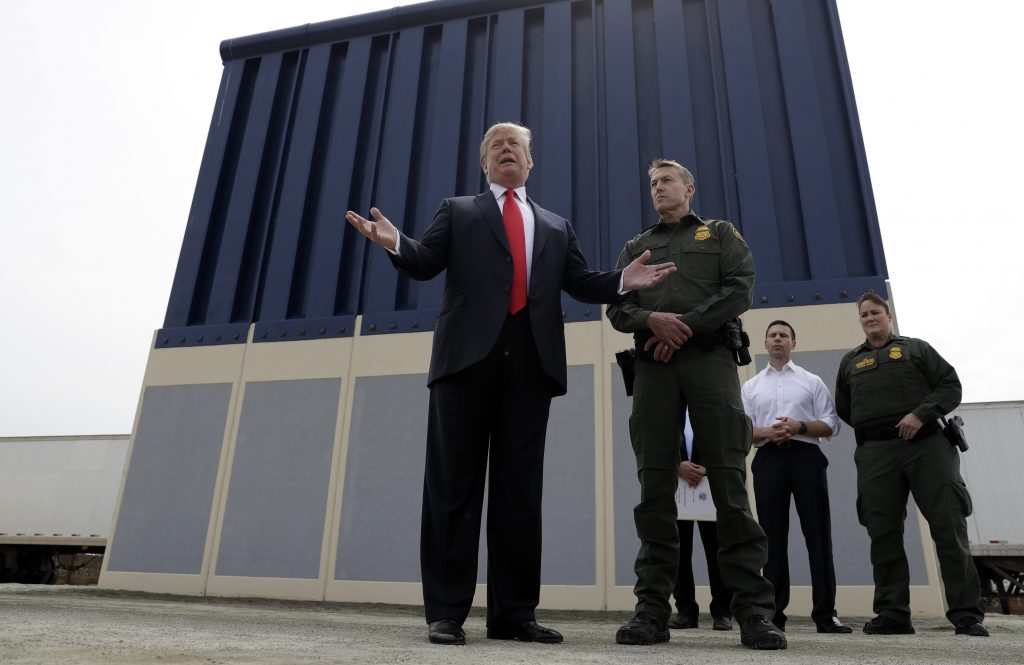 President Donald Trump on Tuesday got his chance to inspect prototypes for the “big beautiful border wall” he wants to build to separate the U.S. from Mexico, saying strengthening the border would help stop “99 percent” of illegal immigration — or, he allowed, “maybe more than that.”

The president, making his first trip to California as president, appeared engaged as he was briefed on eight border wall designs. He said he preferred a fully concrete wall because it was the hardest to climb, but he noted that it needed to be see-through.

Trump said the first thing he noticed on the drive to view the prototypes was the patched-up holes in part of the existing fence at the border.

Trump’s visit was greeted with peaceful protests by demonstrators both for and against his planned wall. The trip also came amid an escalating battle between his administration and the liberal state, which has refused to help federal agents detain immigrants who are in the U.S. illegally.

The president said Tuesday that the state’s sanctuary policies “put the entire nation at risk.” His Justice Department sued California last week over a trio of the state’s immigration laws.

“They’re the best friend of the criminal,” Trump said. “That’s what exactly is happening.

“The criminals take refuge in these sanctuary cities and it’s very dangerous for our police and enforcement folks.”

While in California, Trump was also expected to address Marines in San Diego before attending a high-dollar fundraiser in Los Angeles, where he’ll stay overnight.

“People are so narrow-minded,” said Mark Prieto, 48, an Army veteran and firefighter, as the crowd chanted, “Finally we have someone who is putting America first.”

His wife, Corina Prieto, a nurse who has extended family in Mexico, agreed.

Both voted for Trump.

“I think he is doing a lot of good, like protecting our Border Patrol,” she said.