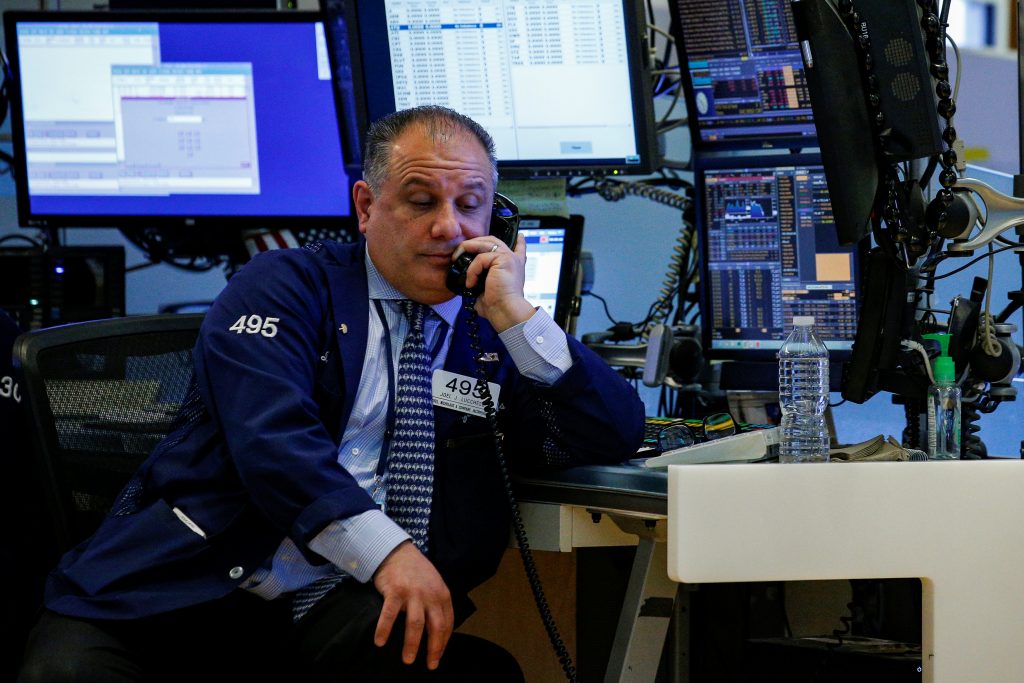 U.S. stocks are sinking Wednesday as investors worry that more protectionist trade policies are on the way. Gary Cohn, the top economic adviser to President Donald Trump, resigned after he opposed the administration’s planned tariffs on imports of steel and aluminum. Pres. Trump also suggested the U.S. could impose penalties on China as part of intellectual property disputes.

Industrial companies like Caterpillar and Boeing are taking some of the worst losses. Retailers are sinking after weak results and a disappointing annual forecast from discount chain Dollar Tree and energy companies are falling with oil prices.

The Russell 2000 index of smaller-company stocks rose 5 points, or 0.3 percent, to 1,567. It’s fared better than the S&P and Dow over the last week as the companies on that index are far more U.S.-focused and would stand to lose less from a flare-up in global trade tensions.

TRADE: Cohn, the director of the National Economic Council, was known to oppose the tariff plan, which has also drawn criticism from Republicans in Congress. Pres. Trump has been resisting calls to reverse his stance.

“He was seen as a key proponent of free trade to balance some of the other more protectionist-type advisers in the administration,” said Keith Parker, U.S. Equity Strategist for UBS.

Industrial companies face the prospect of both greater expenses due to higher metals costs and restricted sales overseas if other nations respond with tariffs on U.S. goods. Aerospace company Boeing fell $4.01, or 1.1 percent, to $344.91 and construction equipment maker Caterpillar gave up $3.54, or 2.3 percent, to $150.21. Farm equipment maker Deere shed $2.55, or 1.6 percent, to $155.96.

TARIFF TARGETS: In response to steel and aluminum tariffs, the European Union has proposed tariffs on items including motorcycles and bourbon. Jack Daniel’s maker Brown-Forman sank after CEO Paul Varga said his company “could be an unfortunate and unintended victim” of more hostile trade. He also said the company has been selling more lower-priced liquors in Europe, and that strategy leaves it more vulnerable to the effects of tariffs.

THE QUOTE: Parker said the tariffs could reduce corporate profits by about $10 billion. While that might have a substantial impact on certain companies, he said it’s far smaller than the boost corporations will get from the tax cut that was signed into law in December. However he said steps against China and retaliation by the Chinese government could raise the cost of items including phones, technology goods, and clothing.

“The risk is that given China policy and actions that there could be something specific placed on Chinese goods, which would potentially lead to a retaliatory action,” he said.

While most investors interpreted the departure of Cohn as a loss, Parker said his resignation might keep some of the administration’s protectionist plans in check when combined with criticism from Republicans in Congress and the generally negative stock market reaction.

DOLLAR TREE STUMPED: Discount retailer Dollar Tree’s fourth quarter results disappointed investors, and so did its forecasts for the current year. It tumbled $16.58, or 15.9 percent, to $87.78.

Competitor Ross Stores decreased $5.30, or 6.6 percent, to $75.21 following its report, and Dollar General fell $4.42, or 4.7 percent, to $89.02. Other companies that make and sell consumer goods and household products were generally lower.