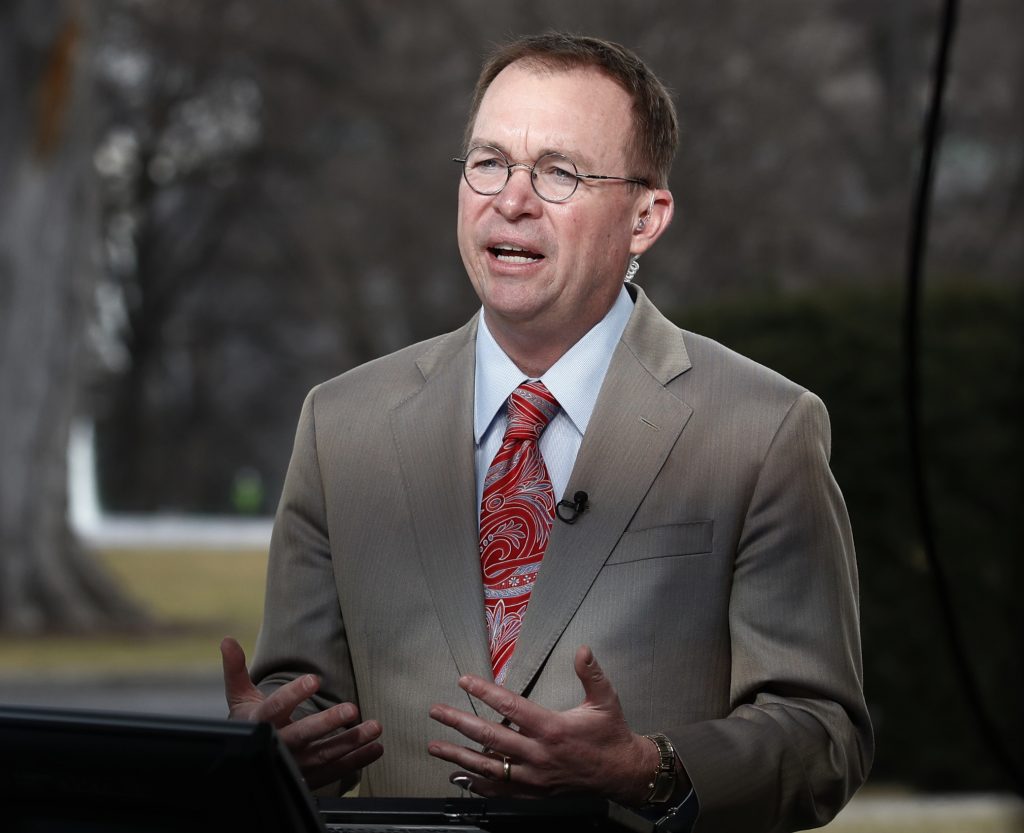 The U.S. will post a larger budget deficit this year and could see a “spike” in interest rates as a result, but lower deficits are possible over time, based on sustained economic growth from Donald Trump’s tax cuts, Budget Director Mick Mulvaney said Sunday.

Mulvaney spoke on Fox News a day before the White House is expected to release 2019 spending proposals, and after weeks in which financial markets have been spooked by prospects for rising inflation tied to higher deficits and lower taxes.

“This is not a fiscal stimulus; it’s not a sugar high,” Mulvaney said of the president’s economic program, including the $1.5 trillion tax cut passed in late 2017.

“If we can keep the economy humming and generate more money for you and me and for everybody else, then government takes in more money and that’s how we hope to be able to keep the debt under control,” Mulvaney said.

In a separate interview on CBS News’s “Face the Nation,” Mulvaney said rising budget deficits are “a very dangerous idea, but it’s the world we live in.”

His comment echoed Mr. Trump’s Feb. 9 tweet that Republicans “were forced to increase spending on things we do not like or want” to secure Democratic votes for the sharp buildup in military spending wanted by the White House and the Pentagon.

Mulvaney said the OMB is updating the 2018 budget released last year and its 2019 request, due Monday, in response to the two-year budget deal the president signed into law on Friday morning.

That agreement, which ended an hours-long partial government shutdown, boosts government spending by almost $300 billion. Mulvaney said that in his previous job as a fiscally-conservative congressman representing South Carolina, he would “probably not” have voted for the bill.

The additional spending could increase the deficit to about $1.2 trillion in 2019, and there’s a risk that interest rates “will spike” as a result, Mulvaney said.

U.S. Treasury yields have been rising in recent weeks on worries that inflation is heating up as the spending package juices an economy already souped up by tax cuts and at or near full employment.

The bill set spending caps, not appropriations, and the budget revisions will show how the new spending should be done, Mulvaney said. The budgets will still show reductions in areas including the State Department and Environmental Protection Agency to reflect Mr. Trump’s priorities, he said.

The 2019 budget will also contain about $3 billion to help fund Mr. Trump’s promised wall on the U.S. border with Mexico, with a contingency in the revised 2018 proposal to fully fund it at $25 billion over two years if a deal is struck to protect immigrants brought to the U.S. illegally as children, called “Dreamers,” Mulvaney said.

While the president’s budget blueprint is usually disregarded by Congress, this year’s document may be particularly irrelevant; the administration had previously expected lower levels of spending.

Rep. Jim Jordan, R-Ohio, a member of the conservative House Freedom Caucus, blasted the spending bill on Fox News. Jordan said he wishes that Speaker Paul Ryan would have stood firmly against it, especially as Congress takes up the controversial topic of immigration.

“Do I think the speaker has problems?” Jordan said. “Yes, I do, particularly now as we head into this big immigration debate.”

Asked whether it’s time for a change, Jordan said, “We’ll have that debate at the appropriate time.”