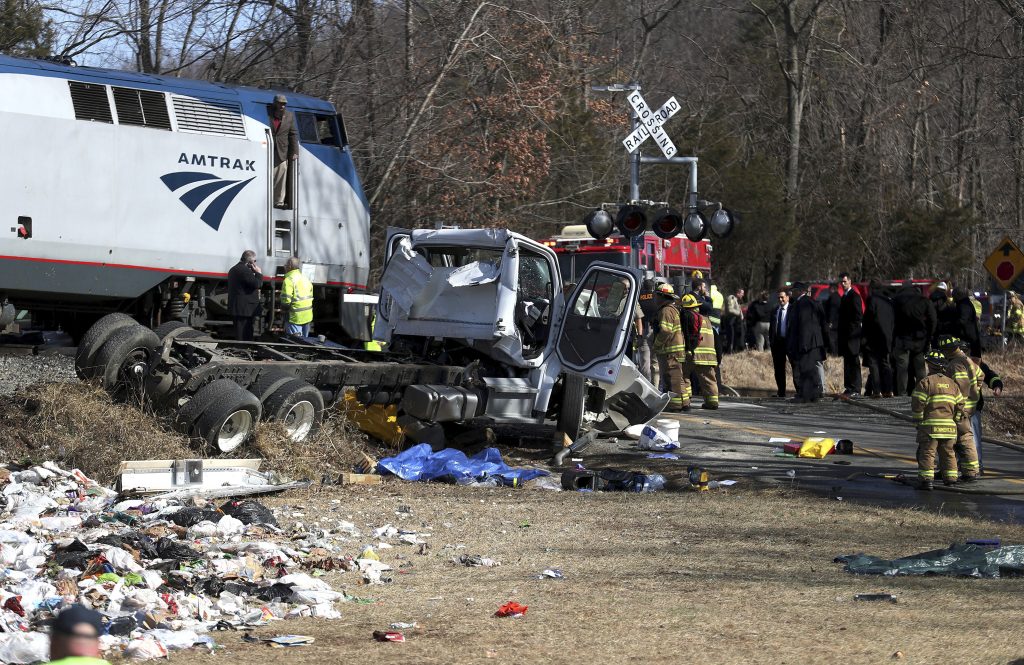 An Amtrak passenger train carrying Republican members of the U.S. Congress from Washington to a retreat in West Virginia slammed into a garbage truck on Wednesday in Crozet, Virginia, killing one person aboard the truck, authorities said.

There was one confirmed fatality and one serious injury in the collision, the White House said. Republican Senator Bill Cassidy, who was aboard the train, said on Twitter that three people were in the truck and one was killed. Of the other two, Cassidy said, one sustained major injuries and one had minor injuries.

“There are no serious injuries among members of Congress or their staff,” White House spokeswoman Sarah Sanders said.

Amtrak said two crew members and two passengers were taken to a local hospital with minor injuries. Representative Jason Lewis of Minnesota was examined at a local hospital for a possible concussion after the collision.

“I’m fine compared to, tragically, the truck drivers, and thankful for the prompt action of our doctors and first responders. My thoughts are with the family of the driver who passed away,” Lewis told Reuters.

The truck was on the tracks at a crossing when the crash occurred, Amtrak said. Video from the scene showed the battered truck afterward, with trash strewn around it.

The train was taking lawmakers to an annual retreat being held this year in White Sulphur Springs, West Virginia, just west of the Virginia state line.

Amtrak said the collision occurred at 11:20 a.m. and local law enforcement was investigating. Crozet is a tiny town between the college town of Charlottesville, Virginia, and White Sulphur Springs.

Lawmakers said spouses and children of some members of Congress were aboard. House of Representatives Speaker Paul Ryan was on the train, but Senate Majority Leader Mitch McConnell was not aboard, lawmakers said.

Cassidy, a doctor, said he and other lawmakers who are physicians tended to the injured until emergency personnel arrived.

Immediately after the crash, a law enforcement team dressed in black surrounded the train with weapons drawn and searched the area for possible attackers as first responders treated the injured, said a local emergency worker, speaking on condition of anonymity.

“They surrounded the train on both sides and set up a perimeter with their automatic weapons pointing out and then searched the woods around the train,” the worker said. “At least five members of Congress helped firefighters and EMTs (emergency medical technicians) treat the three injured people who had been in the truck.”

“We’re fine, but our train hit a garbage truck. Members with medical training are assisting the drivers of the truck,” Representative Greg Walden wrote on Twitter.

The Republican retreat, an opportunity for lawmakers to discuss both legislation and politics in the run-up to November’s congressional elections, was scheduled to run until midday Friday.

The U.S. National Transportation Safety Board said it was sending team to investigate the crash.

The collision was the second tragedy to hit congressional Republicans in the past year.

Last June, a gunman opened fire at a baseball field in Alexandria, Virginia, where Republican lawmakers were practicing for an annual charity game pitting Republicans against Democrats. Representative Steve Scalise, the No. 3 House Republican, was severely wounded but has recovered and returned to work. He was not on the train.

While it was not immediately clear who was at fault in the Virginia collision, Amtrak’s safety record has come under scrutiny after a series of recent incidents including a derailment of a passenger train south of Seattle in December that killed three. In that crash, an engineer misread a signal and failed to slow the train, investigators said.

In November, the chairman of the National Transportation Safety Board issued a harsh critique of Amtrak’s culture.