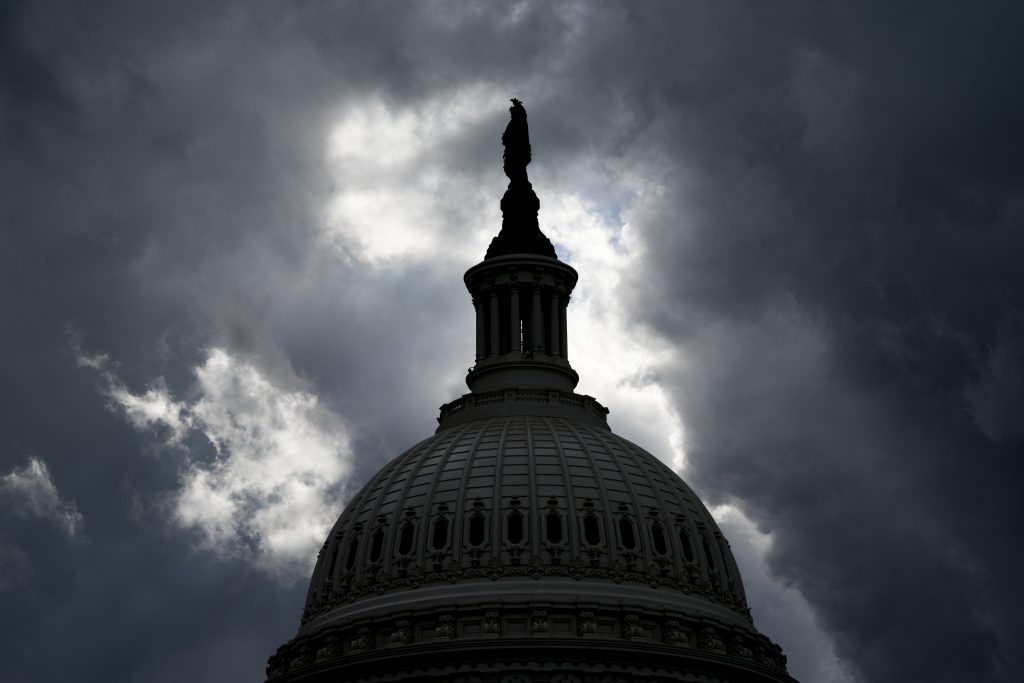 President Donald Trump’s dark portrayal of immigrants in his State of the Union address set back chances for getting a combined deal on the budget and immigration any time soon, making it likely that lawmakers will have to pass another stopgap spending bill next week to keep the government operating past Feb. 8.

After being stung by the political backlash over a three-day government shutdown a little more than a week ago, a senior House Democratic aide said there are no plans within the party to force a resolution on immigration by holding up government funding and forcing another closing.

Democrats may use an agreement on a broader budget plan for the rest of this fiscal year as a bargaining chip, including raising statutory limits on defense and domestic spending.

Republicans and Democrats said Tuesday that a spending caps deal in itself is very close to being agreed to. The deal would likely raise military spending by about $80 billion for two years and increase domestic spending in part by using budget gimmicks. Democrats would be able to claim the increases are equal to military spending while Republicans would be able to claim that minus the gimmicks, the military got the better end of the bargain. There remain differences over how some of the money will be allocated and over offsetting spending cuts.

While some House and Senate conservatives are raising objections to the increased spending — and are offering alternative plans — the White House appears to be on board. Trump didn’t mention the expanding federal deficit in his State of the Union speech.

The main snag is that House Democrats in particular aren’t willing to allow that deal to go forward without providing protection from deportation for undocumented immigrants brought to the U.S. as children. They had been protected under President Barack Obama’s Deferred Action for Childhood Arrivals program, or DACA, which Trump has said would end without congressional action and a broader deal that includes border security money and deep cuts to legal immigration.

“If I trusted the leadership on the other side, then there are various combinations that could be possible. But given the tweets and statements out of the White House we need to do DACA, spending caps and the omnibus together,” said Nita Lowey of New York, the top Democrat on the House Appropriations Committee. “We have a moral responsible to address DACA.”

House Minority Whip Steny Hoyer, a Maryland Democrat, said Feb. 8 is “a real deadline” for funding the government. “In terms of immigration, I think my view is we are not able to get there in that time frame,” Hoyer said Wednesday.

In a speech peppered with pleas for bipartisanship, Trump drew the ire of Democrats with his warning that undocumented immigrants and those who enter the country through a visa lottery system and family sponsorships — which he suggested are “deadly loopholes” –include criminals and terrorists.

He reiterated his offer to give a path to citizenship to 1.8 million people brought to the U.S. as children in exchange for $25 billion for a border wall and other security measures, an end to the visa lottery program and drastically curtailed family sponsorship.

“He is just setting another bad standard which we have to reject,” House Minority Leader Nancy Pelosi of California told reporters Wednesday. “It was dangerous what he said last night.”

Rep. Luis Gutierrez (D-Ill.) said in a statement that Trump’s address “did nothing to bring the pro- and anti-immigrant sides closer together.”

Sen. Mike Rounds (R-S.D.) predicted on Tuesday the next temporary spending measure would last between three and six weeks.

That measure also may need to carry an increase of the nation’s debt ceiling. The Treasury Department said Wednesday that it expects to be able to fund the government through the end of February and it urged Congress to “act promptly” to increase the limit.

The Treasury bill market is starting to show apprehension about when the government might exhaust its borrowing authority, with signs of stress emerging in securities due early March. Investors are now demanding a bigger premium to hold early March debt, putting a kink in the usually upward-sloping T-bills curve.

David Popp, a spokesman for Senate Majority Leader Mitch McConnell of Kentucky, declined to comment on whether the debt ceiling would be part of the next bill.

A group of about 30 senators from both parties also have been working on an immigration proposal, with the goal of trying to produce a plan by early next week. If that deal can be put on the floor for votes and amendments by Feb. 8, they say McConnell will have fulfilled a promise he made to help end the last shutdown.

Democratic Sen. Joe Manchin of West Virginia, one of the bipartisan group’s leaders, said Trump’s offer for legal status and an eventual path to citizenship for the young, undocumented immigrants gives Democrats “something to work with.” Now, the senators are “trying to work through” the administration’s proposal to limit family reunification to spouses and children, end the diversity visa lottery, as well as the administration’s funding request for security.

The bipartisan Senate group is prepared to offer its proposal as a “plan B” if the Durbin and Cornyn talks fail. Senator Marco Rubio of Florida said that such an effort would likely be a narrow bill focusing on some protections for the young immigrants and increased border security. That bill could then be expanded by amendments.

Even if the Senate can get the 60 votes it needs to pass an immigration plan, the House may be unwilling to go along. House leaders at a retreat in West Virginia this week are measuring support for a hard-line bill authored by House Judiciary Committee chairman Bob Goodlatte of Virginia. That bill is less generous to the young immigrants than Trump’s proposal and would more greatly expand immigration enforcement in the workplace.