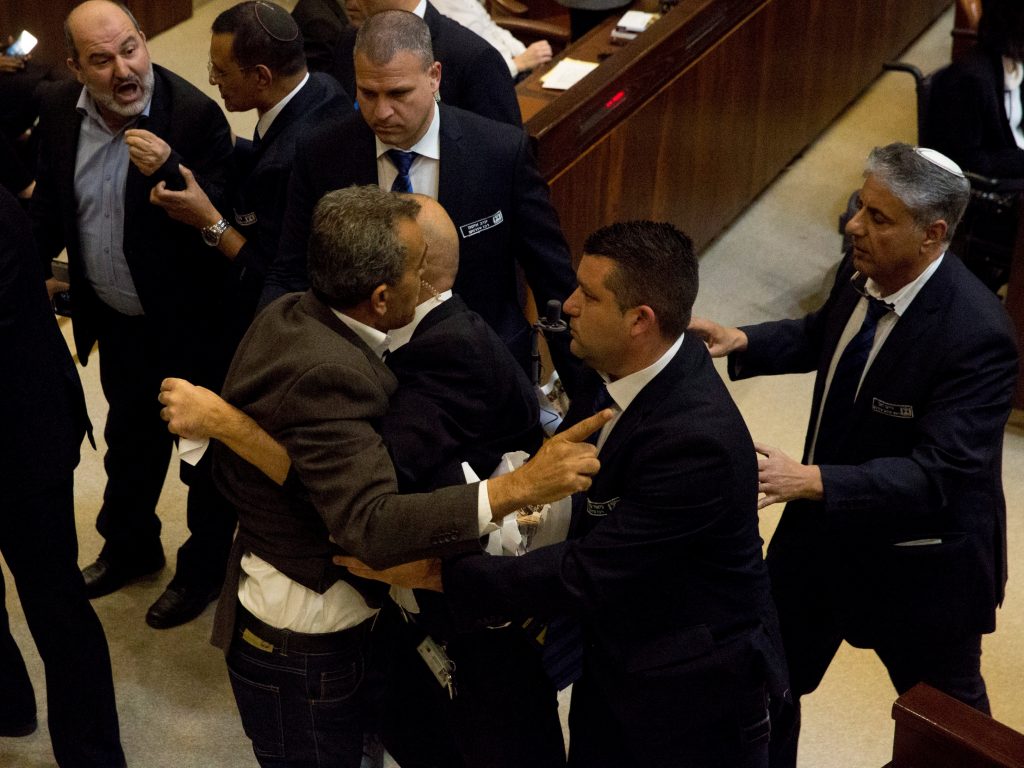 Undeterred by Israeli Prime Minister Binyamin Netanyahu’s admonition against conduct that would “disgrace” the country during Vice President Mike Pence’s visit, Arab MKs had to be hustled out of the Knesset plenum on Monday after waving signs of protest as he began to speak.

Joint (Arab) List members held up signs saying “Jerusalem is the capital of Palestine,” in both English and Arabic, though the latter read “east Yerushalayim.”

A robust round of applause from other MKs partly drowned out the ruckus, which involved some pushing and shoving as the Knesset ushers escorted the protestors out of the hall. The disturbance was over in less than a minute.

The Arab MKs were treated to more than “applause” from their colleagues. Defense Minister Avigdor Liberman condemned the outburst in a tweet saying that the Joint List “proved once again that they are representatives of terrorist organizations in the Knesset.”

Likud MK Oren Hazan later confronted one of them outside the plenum and called him and his fellow faction MKs “terrorists,” and interrupted their interview with reporters.

“The ushers attacked them brutally, pushed them and dragged them even though they were on their way out without resistance. Our expulsion was done in a collective manner without reading the names of the lawmakers that should be removed, contrary to Knesset regulations,” he said.

The Joint List has supported the Palestinian Authority’s position that President Donald Trump’s declaration that Yerushalayim is Israel’s capital and the U.S. will move its embassy there disqualifies Washington from being the leading Mideast peacemaker.

Meanwhile, PA President Mahmoud Abbas’s Fatah party called for a general strike across “all Palestinian sectors” to protest U.S. policy on Pence’s second day in the country on Tuesday.

A separate strike in Gaza was called on Monday, in part to protest against the Americans.

Fatah Central Committee member Jamal Moheisen announced over the PA’s official radio newscast “a comprehensive strike in all sectors and institutions, except the ministries of health and education, to condemn the latest decision by President Donald Trump on Yerushalayim.”