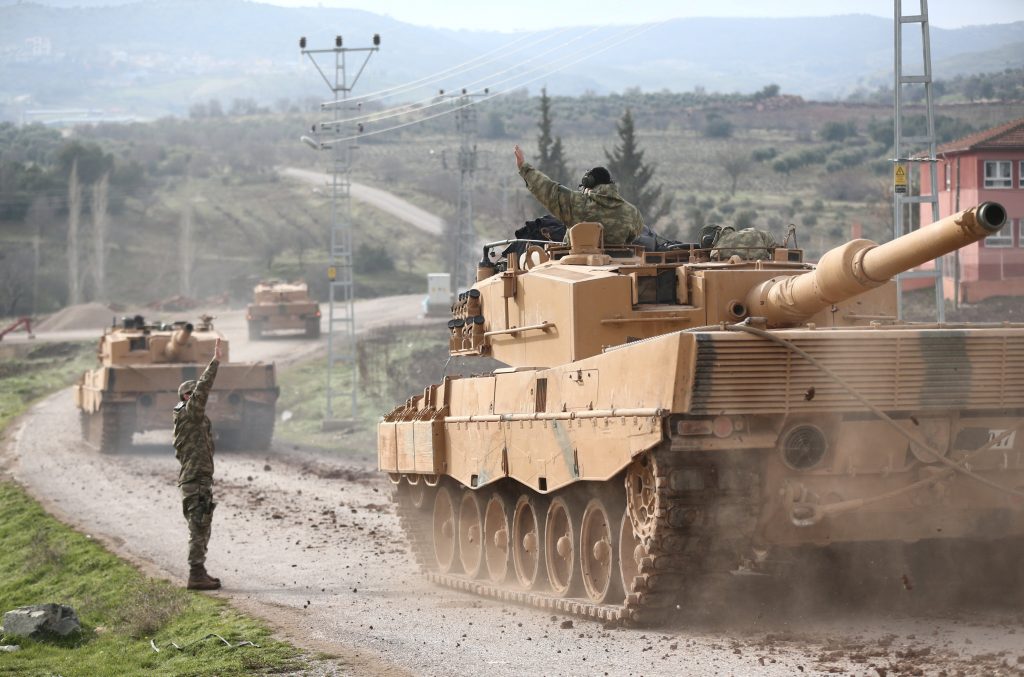 Turkish troops and Syrian opposition forces attacked a Kurdish enclave in northern Syria on Sunday in their bid to drive a U.S.-allied Kurdish militia from the region.
Turkish officials said the troops entered the enclave of Afrin a day after dozens of Turkish jets and Turkish artillery units at the border pounded Syrian Kurdish targets as part of an offensive, code-named Olive Branch, that came on the heels of sharp threats from Turkey’s leaders.
Turkey considers the Syrian Kurdish militia, known as the People’s Protection Units, or YPG, a terror organization and a security threat because of its affiliation to Kurdish rebels fighting in southeastern Turkey.
The group controls Afrin, in Syria’s northwestern corner, as well as a swath of territory along Turkey’s border. The YPG also forms the backbone of the Syrian Democratic Forces, the main U.S. ally against the Islamic State group in Syria.
SDF spokesman Mustafa Bali denied that Turkish troops had entered Afrin, saying Kurdish forces had been repelling attacks since Saturday.
The Britain-based Syrian Observatory for Human Rights says the Kurdish militia and Turkish forces have clashed on the northern and western edges of Afrin, but that Turkish troops have failed to advance.
Turkish President Recep Tayyip Erdogan has promised to expand the operation to other Kurdish regions. Turkish media reports have quoted Prime Minister Binali Yildirim as telling a group of journalists on Sunday that Turkey aims to create a 20-mile-deep “secure zone” in Afrin.
Earlier Sunday, four rockets fired from Syria hit the Turkish border town of Kilis, prompting Turkish artillery to return fire, Gov. Mehmet Tekinarslan said. The rockets hit two offices and office building, and slightly wounded one person.
The state-run Anadolu Agency said the Turkish-backed fighters had penetrated 3 miles into Afrin.
Associated Press journalists on the border saw a convoy of trucks, believed to belong to Syrian opposition fighters, carrying pick-up trucks mounted with arms. Artillery shelling could be heard in the distance.
Turkey has prepared around 10,000 Syrian fighters to storm Afrin, according to Rami Abdurrahman, director of the Syrian Observatory for Human Rights, a Britain-based monitoring group.
A Syrian commander speaking to the AP by phone from northern Syria said there were thousands of fighters positioned in Azaz, at the frontier with the Kurdish enclave, awaiting orders. Another commander said hundreds more were stationed in Atmeh, south of Afrin. The officials spoke on condition of anonymity because they were not authorized to speak to the media.
Turkish leaders were infuriated by an announcement by the U.S. military this week that it was going to create a 30,000-strong border force with the Kurdish fighters to secure northern Syria. Days later, Secretary of State Rex Tillerson announced that the U.S. would maintain a military presence with the Kurds for the foreseeable future.