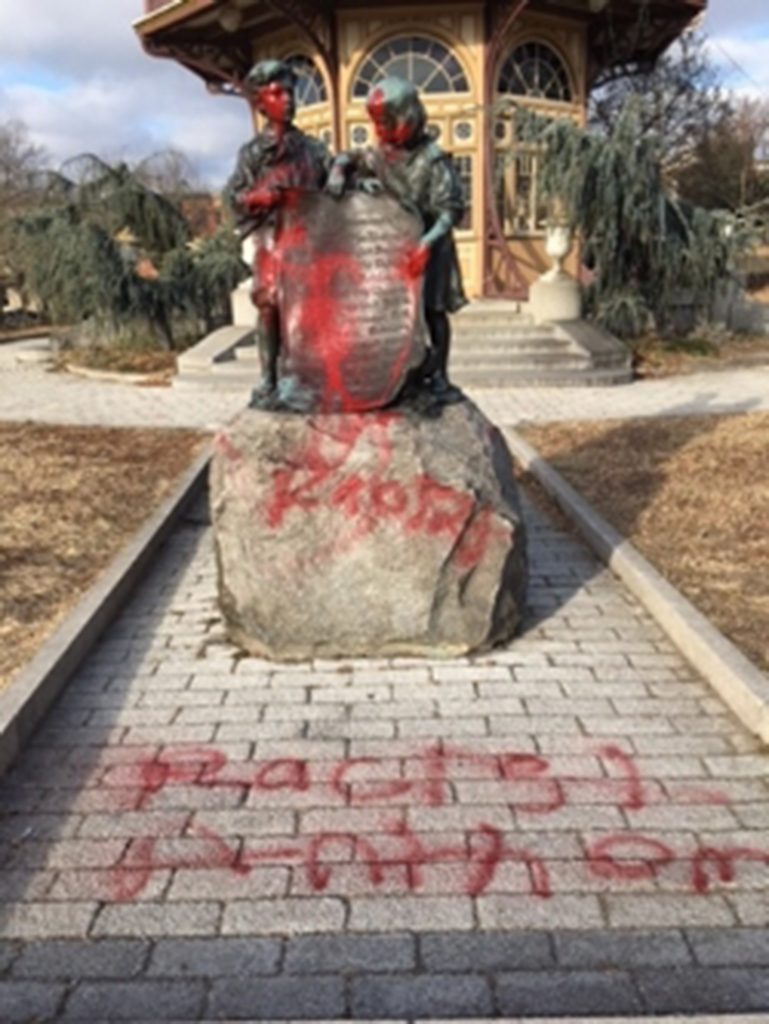 A statue paid for with pennies contributed by Baltimore school children more than a century ago was found sprayed with red paint Monday morning.

Jennifer Arndt Robinson, executive director of Friends of Patterson Park, said the bronze statue of children holding a scroll to commemorate the writing of “The Star-Spangled Banner” had been damaged by paint. The words “Racist Anthem” were sprayed on a sidewalk near the statue.

“We were notified early this morning of the incident,” said Robinson. “We are working with appropriate city officials to make sure it is addressed as quickly as possible.”

Robinson said a canon near the statue also was hit by paint.

A spray paint can was recovered at the site and is being handed over to the Baltimore Police, she said.

“While we recognize the issue of freedom of expression, there has to be more appropriate ways to have that conversation,” Robinson said.

The 1914 statue, the work of sculptor J. Maxwell Miller, shows two schoolchildren holding a scroll that reads: “To commemorate the centennial of the writing of the Star-Spangled Banner, the pupils of the public schools of Baltimore have erected this memorial upon Hampstead Hill where in September, 1814, the citizen soldiers of Maryland stood ready to sacrifice their lives in defense of their homes and their country.”

The statue in Patterson Park isn’t the first to be vandalized in recent months. Among other incidents, a monument in Bolton Hill to Francis Scott Key — who wrote the poem that would later become the national anthem — was splashed with red paint in September. There, too, the words “Racist Anthem” were written in paint.

And in August, a monument to Christopher Columbus in Herring Run Park was smashed. A video posted to social media showed a man striking the base of the monument with a sledgehammer. Another person held a sign that said “Racism, tear it down.”