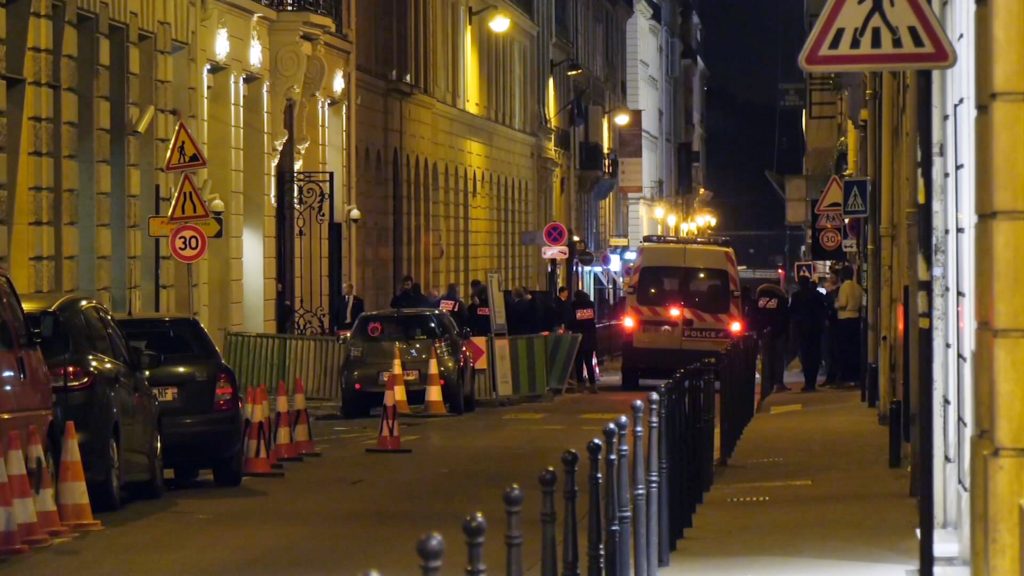 Paris police on Thursday recovered most of the jewels stolen from the Ritz Hotel in a dramatic heist, but are still searching for two thieves and any remaining missing luxury merchandise.

The robbery on Wednesday evening raised questions about security in one of the world’s most prestigious neighborhoods, the Place Vendome, whose well-guarded buildings include the Justice Ministry, high-end boutiques and the 19th century Ritz.

Workers cleaned up shattered glass Thursday morning and started to repair damage from the robbery. Otherwise business appeared to be returning to normal at the Ritz, with no significant increase in security.

They seized watches from display cases holding wares from Rolex and Piaget, and then targeted the Reza jewelry boutique inside the hotel.

The suspects inside threw bags of goods out a window to at least two accomplices outside, according to a police official. The three inside were then blocked when they tried to flee through another door, and quickly arrested, the official said.

The accomplices outside fled, one on a motorcycle and another in a car. The motorcyclist dropped a bag with jewels and hatchets when his motorcycle hit a pedestrian during his escape. The pedestrian was lightly injured, said the official, who was not authorized to speak publicly about an ongoing investigation.

Other jewels were found scattered amid the debris of the shattered display cases during overnight cleanup efforts, the official told The Associated Press.

The overall value of the jewels on display was estimated at about 4.5 million euros ($5.4 million).

A judicial official said Thursday that most of the jewels appeared to have been recovered. Authorities were working with the jewelers to determine if any items are still missing and their value, according to the official.

Patrons at the hotel’s renowned Hemingway Bar described panic as the thieves entered the hushed environment of the Ritz, where rooms start at 1,000 euros ($1,200) a night.

Several high-end Paris jewelry stores have been targets of dramatic robberies in recent years, including Cartier, Harry Winston and Chopard.

The Ritz was an especially luxurious target. It has hosted celebrities and elite guests from around the world.