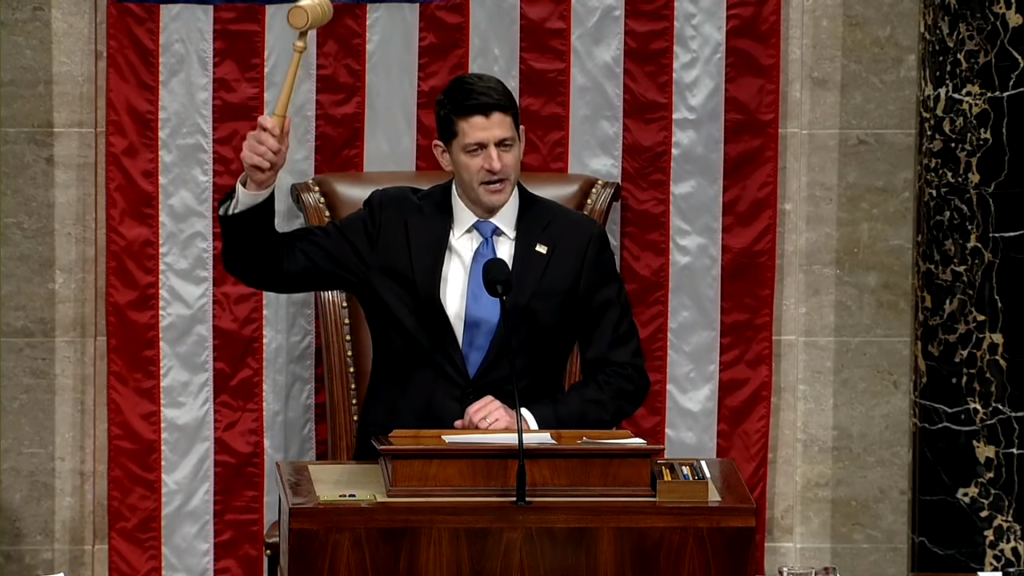 Gleeful Republicans on Tuesday muscled the most sweeping rewrite of the nation’s tax laws in more than three decades through the House. House Speaker Paul Ryan dismissed criticism of the widely unpopular package and insisted “results are what’s going to make this popular.”

The vote, largely along party lines, was 227-203 and capped a GOP sprint to deliver a major legislative accomplishment to President Donald Trump after a year of congressional stumbles and non-starters.

In a last-minute glitch, however, Democrats said three provisions in the bill, including one that would allow parents to use college savings accounts for home-schooling expenses for young children, violate Senate budget rules.

House Majority Leader Kevin McCarthy, R-Calif., said the House would vote on the package again on Wednesday, after the Senate removes the problematic provisions and passes the bill.

The massive $1.5 trillion package would touch every American taxpayer and every corner of the U.S. economy, providing steep tax cuts for businesses and the wealthy, and more modest tax cuts for middle- and low-income families. It would push the national debt ever higher.

The standard deduction used by most families would be nearly doubled, to $24,000 for a married couple, while those who itemize would lose some deductions.

“We’re delivering a tax code that provides more jobs, fairer taxes and bigger paychecks to Americans across the country,” said Rep. Kevin Brady of Texas, Republican chairman of the tax-writing Ways and Means Committee. “Our local job creators will see the lowest rates in modern history so they can invest more in their workers and in their future.”

Democrats called the bill a giveaway to corporations and the wealthy, providing little if any tax help to the less-than-well-to-do and no likelihood that business owners will use their gains to hire more workers or raise wages.

And the Republicans’ contention that the bill will make taxes so simple that millions can file “on a postcard” — an idea repeated often by the president — was simply mocked.

“What happened to the postcard? We’re going to have to carry around a billboard for tax simplification,” declared Rep. Richard Neal of Massachusetts, the top Democrat on the Ways and Means Committee.

Tax cuts for corporations would be permanent while the cuts for individuals would expire in 2026 in order to comply with Senate budget rules. The tax cuts would take effect in January. Workers would start to see changes in the amount of taxes withheld from their paychecks in February.

The proceedings were interrupted several times by protesters shouting from the gallery.

The bill is unpopular among the public, and Democrats plan to campaign against it in next year’s congressional elections. Senate Democrats posted poll numbers on the bill on a video screen at their Tuesday luncheon.

“This bill will come back to haunt them, as Frankenstein did,” said House Democratic leader Nancy Pelosi.

Not so, said Ryan, who has worked for years on tax overhaul.

“When we get this done, when people see their withholding improving, when they see jobs occurring, when they see bigger paychecks, a fairer tax system, a simpler tax code, that’s what’s going to produce the results,” said Ryan, R-Wis.

The bill would slash the corporate income tax rate from 35 percent to 21 percent. The top tax rate for individuals would be lowered from 39.6 percent to 37 percent.

It scales back a popular deduction for state and local taxes, repeals a key tenet of Barack Obama’s Affordable Care Act and allows drilling in the Arctic National Wildlife Refuge.

Despite GOP talk of spending discipline, it is projected to add $1.46 trillion to the nation’s debt over a decade. GOP lawmakers say they expect a future Congress to continue the tax cuts so they won’t expire. If achieved, that would drive up deficits even further.

Republicans acknowledged they still have to convince many Americans of the benefits of their bill. Many voters in surveys see the legislation as a boost to the wealthy, such as Trump and his family, and only a minor gain for the middle class.

The $1,000-per-child tax credit doubles to $2,000, with up to $1,400 available in IRS refunds for families who owe little or no taxes. Parents would have to provide children’s Social Security numbers to receive the child credit, a measure intended to deny the credit to people who are in the U.S. illegally.

The legislation also repeals an important part of the health care law — the requirement that all Americans carry health insurance or face a penalty — as the GOP looks to unravel a law it failed to repeal and replace this past summer.

The bill would initially provide tax cuts for Americans of all incomes. But if the tax cuts for individuals expire, most Americans — those making less than $75,000 — would see tax increases in 2027, according to congressional estimates.

Disgruntled Republican lawmakers from high-tax New York, New Jersey and California receded into the background as the tax train rolled. They oppose the new $10,000 cap on the deduction that millions use in connection with state and local income, property and sales taxes. The cap remains in the final bill.

The deduction is especially vital to residents of high-tax states.

Several defectors reaffirmed their “No” votes for the final bill on Tuesday. Rep. Peter King conveyed what people in his Long Island, New York, district were telling him about the tax bill: “Nothing good, especially from Republicans. … It’s certainly unpopular in my district,” he said.