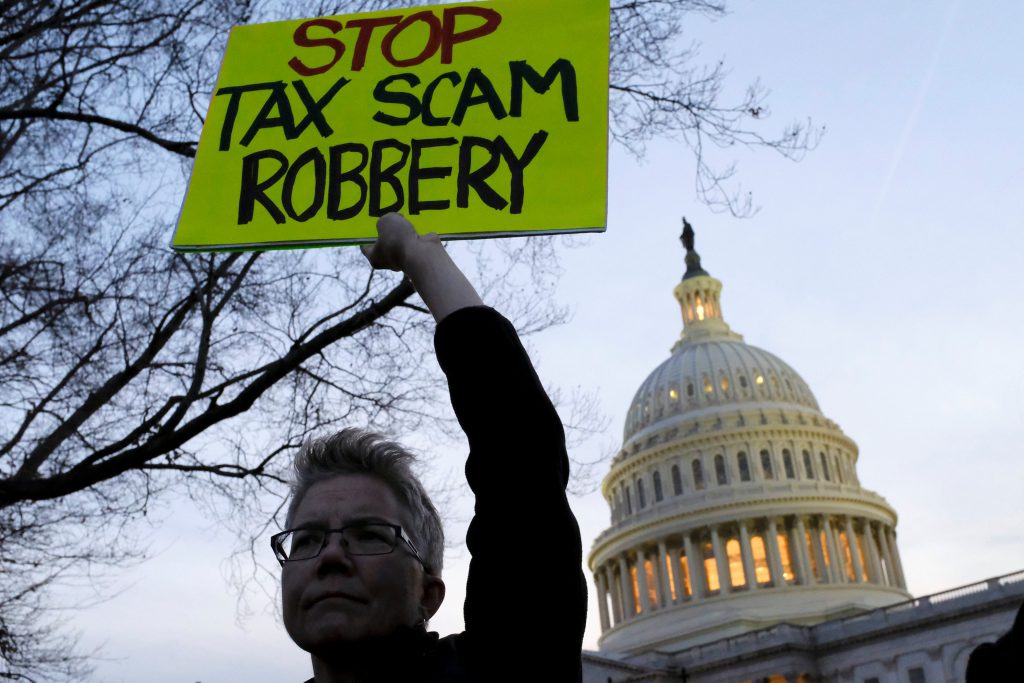 Senate Republicans weighed scaling back the tax cuts in their massive package to secure crucial support as congressional analysts said Thursday the legislation would add $1 trillion to the nation’s debt over the next decade.

Republicans were making major changes to the bill up to the last minute, including one that would roll back some of the tax cuts after six years to appease deficit hawks. The first revamp of the tax code in three decades — a top political priority of President Donald Trump — would affect nearly every American and business.

The scramble to alter the bill came after senators said the chamber’s parliamentarian had ruled that automatic “triggers” designed to guard against big deficits would violate Senate rules. GOP leaders’ main concern was winning over lawmakers, including Sens. Bob Corker of Tennessee and Jeff Flake of Arizona, concerned about adding more red ink to the deficit.

GOP leaders also were struggling to placate Wisconsin Sen. Ron Johnson, who wanted an increase in the deduction for business income.

Senate Majority Leader Mitch McConnell, R-Ky., had expressed confidence early in the day, but he has little margin for error with a 52-48 majority. He can afford to lose two votes while counting on Vice President Mike Pence to break the tie.

Sen. John Cornyn, R-Texas, said the bill will have “alternative, frankly, tax increases we don’t want to do” to deal with deficit concerns. Flake said the tax increases would raise about $350 billion over 10 years, though he didn’t specify which taxes would go up.

Forced to rewrite the bill behind closed doors, Republican hopes of passing the bill late Thursday slipped to Friday.

In a dramatic turn, Democrats forced a vote on whether to return the measure to the Senate Finance Committee so it could be rewritten to ensure smaller deficits. They nearly prevailed in derailing the measure as Corker, Flake and Ron Johnson of Wisconsin held out for just over an hour, repeatedly cajoled by their colleagues. They eventually joined fellow Republicans to scuttle the Democratic proposal.

Corker has been pushing to add automatic tax increases in future years if the package doesn’t raise as much revenue as projected.

With the provision seemingly dead, Corker said senators would change the bill to roll back some of the tax cuts in future years, regardless of whether tax revenues meet expectations. Flake said the tax increases would take affect after six years.

Lawmakers will then try to reconcile the Senate bill with one passed by the House in the hope of delivering a major legislative accomplishment to Trump by the end of the year. Republicans have cast passage of a tax overhaul as a political imperative to ensure they hold their House and Senate majorities in next year’s midterm elections.

A new analysis by the nonpartisan Joint Committee on Taxation found that the bill would add $1 trillion to the deficit.

The tax bill would increase economic growth, generating an additional $458 billion in tax revenue, according to the analysis. That’s far short of the $2 trillion promised by Treasury Secretary Steven Mnuchin.

Two Republican senators, John McCain of Arizona and Lisa Murkowski of Alaska, announced their support for the tax package Thursday, giving it a major boost. Both McCain and Murkowski had voted against the GOP bill to dismantle the Obama health care law this past summer.

Senators were still grappling with several issues Thursday, including a provision to add a deduction for local property taxes. The current Senate bill completely eliminates the federal deduction for state and local taxes, a popular deduction in the Democratic-leaning states of New York, New Jersey, California and Illinois as well as many wealthy suburbs nationwide.

Sen. Susan Collins, R-Maine, proposed an amendment to let homeowners deduct up to $10,000 in local property taxes on their federal returns. It is similar to a provision in the House-passed bill.

Without the deduction, Collins said, it would be “very problematic for me” to vote for the bill.

Johnson said Thursday he is still withholding support for the bill because he would like the deduction increased to 25 percent. He would pay for it by repealing the corporate deduction for state and local taxes.

The plan would nearly double the standard deduction to around $12,000 for individuals and about $24,000 for married couples. The tax cuts for individuals would expire in 2026 while the corporate tax cuts would be permanent.