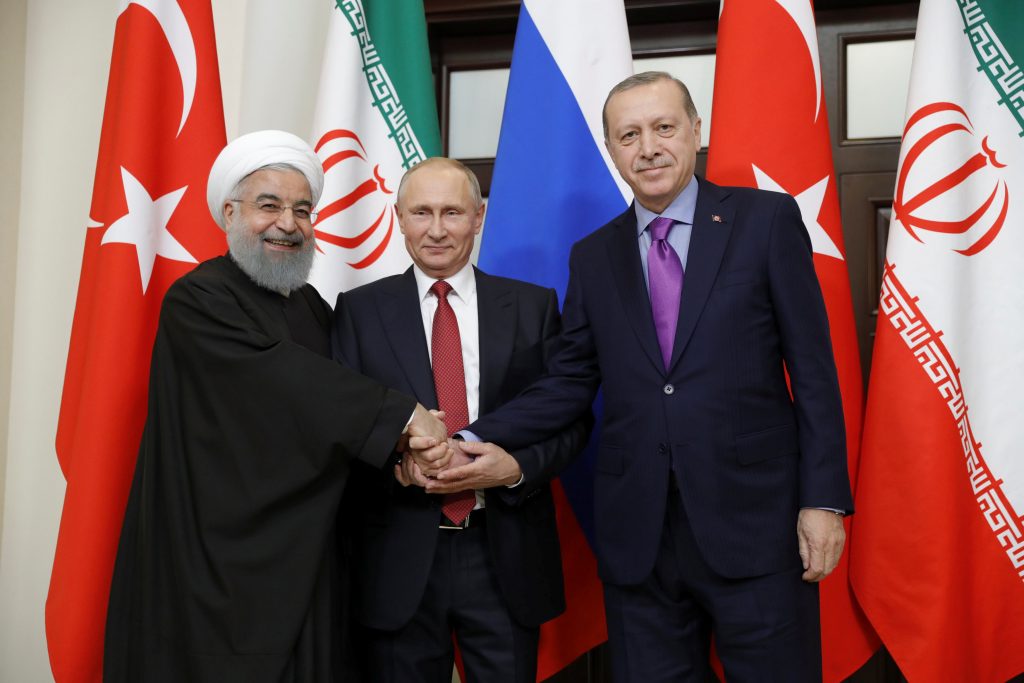 Russia’s Vladimir Putin won the backing of Turkey and Iran on Wednesday to host a Syrian peace congress, taking the central role in a major diplomatic push to finally end a civil war all but won by Moscow’s ally, President Bashar al-Assad.

Syrian opposition groups, meeting in Saudi Arabia to seek a unified position ahead of peace talks, decided to stick to their demand that Assad leave power, Al Arabiya tv reported, following speculation they might soften their stance after their hardline leader quit.

Two days after being visited by Assad in the Black Sea resort of Sochi, President Putin hosted his counterparts Tayyip Erdogan and Hassan Rouhani there.

In a joint statement, the three leaders called on the Syrian government and moderate opposition to “participate constructively” in the planned congress, to be held in the same city on a date they did not specify.

“The congress will look at the key questions on Syria’s national agenda,” Putin told reporters at the summit, sitting alongside Rouhani and Erdogan. “First of all that is the drawing-up of a framework for the future structure of the state, the adoption of a new constitution, and, on the basis of that, the holding of elections under United Nations supervision.”

There was no word from the leaders on who would be invited. The list of invitees has been a sticking point, with Turkey objecting to some Syrian Kurdish groups attending.

Syria’s civil war, in its seventh year, has killed hundreds of thousands of people and created the world’s worst refugee crisis, driving more than 11 million people from their homes.

All previous efforts to achieve a diplomatic solution have swiftly collapsed, with the opposition demanding Assad leave power, the government insisting he stay on, and neither side able to force the issue by achieving a military victory.

But since Russia joined the war on behalf of Assad in 2015, the balance of power has turned decisively in his government’s favor. A year ago, the army forced rebels out of their last urban stronghold, the eastern half of Aleppo.

In recent weeks, the self-proclaimed caliphate of jihadist group Islamic State has collapsed. Government forces now effectively control all of Syria apart from a few shrinking rebel pockets and a swathe in the north held by mainly Kurdish forces backed by the United States.

Opposition groups held their meeting on Wednesday at a luxury hotel in Riyadh, two days after the leader of the High Negotiations Committee (HNC) that has represented them at previous peace talks quit abruptly.

HNC chief Riyad Hijab had been known as an uncompromising defender of the position that Assad must have no role in any political transition for Syria, and his resignation had led to speculation the opposition could soften its stance.

However, a draft of the meeting’s final statement still included the demand Assad leave office at the start of any transition, Saudi-owned Al Arabiya tv reported.

Having helped Assad’s government reach the cusp of victory, Putin now appears to be playing the leading role in international efforts to end the war on Assad’s terms.

In addition to hosting Assad, Rouhani and Erdogan, the Russian leader has also phoned U.S. President Donald Trump and Saudi King Salman in the past 24 hours.

Saudi Arabia, Iran’s arch rival in the Middle East and long a backer of rebel groups in Syria and advocate of the position that Assad must leave, has been the main supporter of the HNC. But after King Salman made an historic visit to Moscow a few months ago, Riyadh appears to have come around to Russia’s dominant role in Syria.

Similarly Turkey, traditionally one of the Syrian leader’s implacable foes, has increasingly shown willingness to work with Russia to resolve the crisis.

“This summit is aimed at results. I believe critical decisions will be reached,” Turkey’s Erdogan said in Sochi before his meeting with Putin and Rouhani.

The Syrian government welcomed the final statement from the three-way Iran summit, Syrian state media said on Wednesday, quoting an official source in the Foreign Ministry. It described it as the culmination of Assad’s summit with Putin.

The other major power with troops in Syria, the United States, has so far kept its distance. Washington has been arming, training and sending special forces to assist a Kurdish group fighting against Islamic State, angering Turkey which is fighting its own Kurdish insurgency.

Still, any final settlement that keeps Assad in power will probably require the participation of some kind of opposition delegation willing to negotiate over the demand that he go.

U.N. peace talks mediator Staffan de Mistura, host of the formal peace process in Geneva, told the opposition groups at the Riyadh meeting they needed to have the “hard discussions” necessary to reach a “common line”.

“A strong, unified team is a creative partner in Geneva and we need that, one who can actually explore more than one way to arrive to the goals that we need to have,” he said.

De Mistura will meet Russia’s defense and foreign ministers on Thursday to discuss preparations for a new round of Geneva talks, Russian news agency RIA reported.

Russia said on Tuesday that the resignation of such “radically minded” Syrian opposition figures as HNC chief Hijab would help unite the disparate opposition factions around a more “realistic” platform.