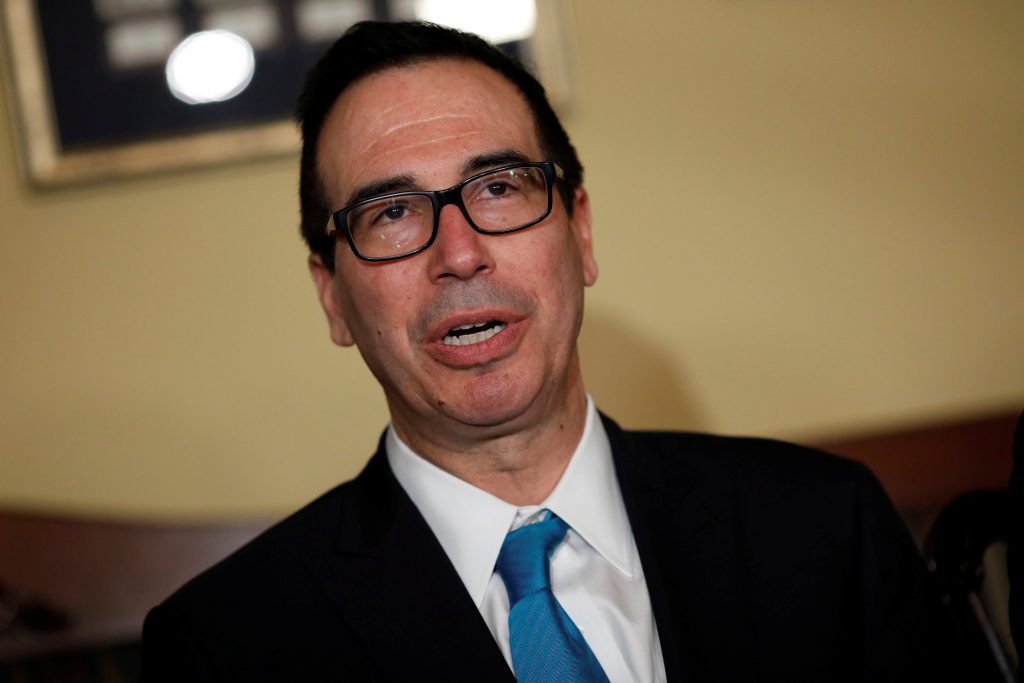 People who earn $300,000 a year in New York and New Jersey stand to get “several thousands of dollars” of tax cuts from legislation in Congress, Treasury Secretary Steven Mnuchin said during a visit to a New Jersey fire station.

“For the median family of four, it’s over $1,000,” Mnuchin said during an appearance with Ivanka Trump, President Donald Trump’s daughter and a White House adviser. The pair extolled the benefits of the tax package in a state where some would be particularly hard-hit by one provision: a repeal of some, if not all, federal deductions for state and local taxes.

They made their pitch to more than 100 people invited by Trump’s White House staff, who packed a Bayville, New Jersey, fire hall. The administration’s message: Trump personally insisted upon a tax plan focused on benefiting the middle class. As homeowners who pay property and income taxes, they stand to be adversely affected by provisions in the proposed legislation that would end or limit federal deductions for those tax payments.

The administration couldn’t have chosen a New Jersey venue more solidly Republican than this Ocean County shore town, in a county where all but one of 33 towns chose Trump over Democrat Hillary Clinton in 2016 by a margin of more than 2-to-1. The area was particularly hard-hit in 2012 by Superstorm Sandy, and has been a favorite site for Republican Gov. Chris Christie to announce build-back policies since then.

The Republican governor, who trounced his Democratic opponent in the county four years ago by a margin of more than 3-to-1, introduced the panel, which also included Rep. Thomas MacArthur, saying that the congressman has been an advocate for retaining a federal deduction for property tax payments.

“Without his voice, I don’t know whether it would be here or not,” Christie said.

Christie’s successor, Democratic Gov.-elect Phil Murphy, said the bill is “bad for New Jersey.” Republicans are desperate to get something passed ahead of the 2018 midterm elections, Murphy said.

“They’ve got nothing to show for this past year,” Murphy said.

Mnuchin, though, stressed the plan’s benefits for middle-class taxpayers.

“We in Treasury have literally run hundreds and hundreds of examples to make sure people get real tax cuts,” Mnuchin said. “I have lived in the high-tax states of the world, New York and California, so I can understand life in New Jersey.”

Ivanka Trump, who has called for creating an enhanced child tax credit, said she learned about American families’ difficulties during her father’s presidential campaign. “I realize how hard it is to balance the competing demands of a working family and I’m more fortunate than most,” she said.

In high-tax states, including New York, New Jersey and California, the Senate plan would hit some taxpayers harder than others by eliminating all state and local tax deductions, a cut designed to provide revenue that would offset the deep tax-rate cuts that have been proposed. The House bill would eliminate the breaks for state and local income or sales taxes, but preserve a property-tax deduction, capped at $10,000.

“For people who make $1 million in high-tax states, there will be a tax increase,” Mnuchin said.

Under the House bill, 27 percent of New Jersey households would see a tax increase by 2027, while 22 percent would get hit under the Senate bill, according to the group’s report, released ahead of a press conference with Murphy and Democratic members of the House in Newark.

The bottom 60 percent of New Jersey households would get only 28 percent of the plans’ tax cuts, according to the group. Another report, also released Tuesday, found that 41 percent of New Jersey households deduct state and local taxes from their federal taxes, the third-highest share in the nation. “Teachers will not be able to deduct supplies that they purchase out of their own pocket,” said Rep. Donald Payne, a Democrat from Newark. “What is that about?”