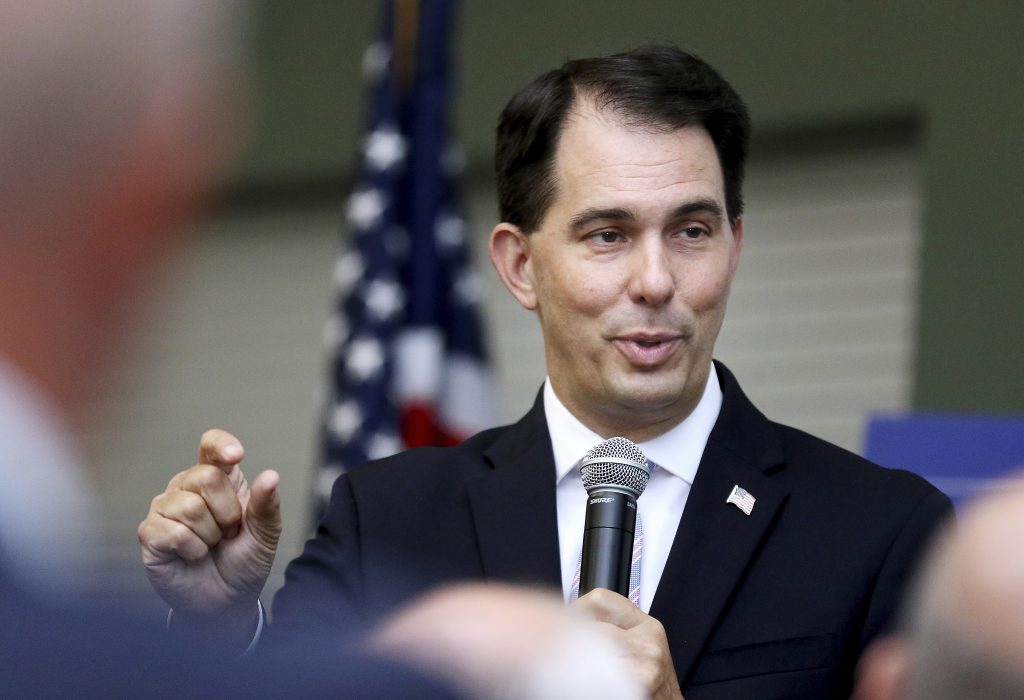 Wisconsin Gov. Scott Walker, who became the first governor in U.S. history to survive a recall but flamed out early in the 2016 presidential race, launched his re-election campaign Sunday calling for an “army of grass-roots volunteers” to combat what he says will be a coordinated attack against him by Washington-based special interests.

The Republican told supporters at the kick-off event at Weldall Manufacturing outside of Milwaukee that winning a third term “isn’t going to be easy.”

“The big government special interests in Washington, they’ve already made us a target in this election,” Walker told a couple hundred backers on the factory floor. A larger group of protesters, organized by the immigrant rights group Voces de la Frontera, rallied outside.

There is no clear Democratic front runner to face Walker in the November 2018 election. At least a dozen Democrats, including the state superintendent of schools, two state lawmakers, former office holders, political activists and newcomers, have said they are running or are considering getting in.

No matter the candidate, Democrats will run and win on a message that Republicans have ignored working-class people to benefit the wealthy and special interests, said Wisconsin Democratic Party chairwoman Martha Laning.

Walker, 50, is looking to become the first Wisconsin governor since Tommy Thompson in 1998 and only the second in state history to be elected to a third four-year term. There are no term limits in Wisconsin, although Walker has said he wouldn’t seek a fourth term if he wins or leave before his term is over.

Thompson praised Walker for staying visible and engaged in the state after his failed presidential run in 2015.

“It’s difficult running for governor,” Thompson said in an interview. “Each time you have more people that want to question you but he knows what he has to do and he’s doing it.”

Dick Fleissner, 61, of Milwaukee, said at the rally he’s supported Walker for years, including when he was Milwaukee County executive before being elected governor in 2010.

“Regardless of the position he’s had, he makes bold moves,” Fleissner said. “He just does what he believes is the right thing to do. He sticks to his guns.”

Though Walker has won three governor elections, counting the recall, he’s never gotten more than 53 percent of the vote. His approval rating dropped to a low of 37 percent in late 2015 but has slowly grown back to 48 percent. Democrats are optimistic those numbers coupled with low approval ratings for President Donald Trump make Walker vulnerable.

Walker has a national fundraising base and an impressive political organization that helped Trump become the first Republican to carry the state since Ronald Reagan in 1984. The current head of the Republican Governors Association, his signature achievement is the Act 10 law that effectively ended collective bargaining for most public workers was enacted just months after Walker took office in 2011 and thrust him into the national spotlight.

Walker said in a Saturday interview he was worried that outside money that flowed into his 2012 recall and 2014 re-election campaign won’t be there this time around, while he remains a top target of liberal groups, including the national union representing public workers. Walker said he’s focused on building a strong re-election team in Wisconsin and already has campaign co-chairs in all 72 counties.

Democrats have also been busy organizing, with the hiring of a new statewide coordinator and seven regional directors this year to prepare for 2018.

Walker has made Wisconsin a right-to-work state, signed a voter ID requirement, curbed environmental regulations to benefit the business community and all but eliminated corporate taxes. He and legislative Republicans have cut taxes by a collective $8 billion, and property taxes on a typical median-valued home will be less in 2018 than they were when he took office.

The state’s unemployment rate, bolstered by the national economy, is the lowest it’s been since 2001. Walker earlier this year signed the largest economic development deal in state history, with Taiwanese company Foxconn Technology Group planning to invest up to $10 billion on a display screen factory that could employ 13,000 people.

Though some Democrats have criticized the deal, it was a significant victory for Walker, who has never fulfilled a 2010 campaign promise to create 250,000 private-sector jobs.

“We’re not satisfied with just where we’re at,” Walker said Sunday. “We’re moving forward because there’s more to be done.”

“I think that’s all spin,” she said. “We’re a state that’s headed in the wrong direction.”