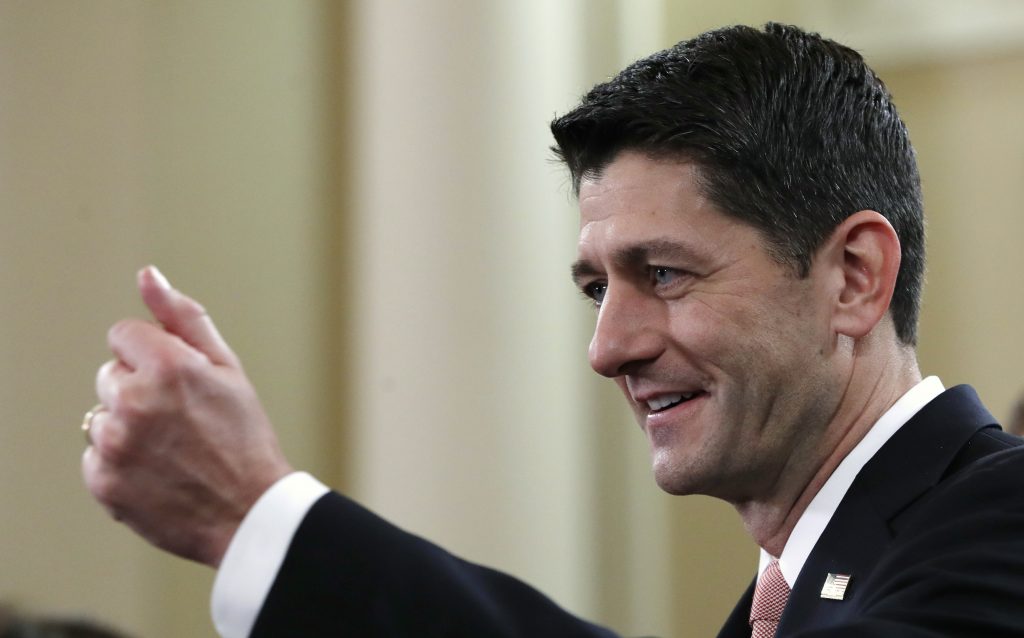 House Republicans on Thursday unveiled a tax cut plan that slashes the corporate tax rate, lowers taxes for most Americans but limits a cherished deduction for homeowners as President Donald Trump and the GOP seek to deliver on the first tax revamp in three decades. The proposal would add $1.5 trillion to the nation’s debt.

Middle-income families would pay less, thanks to doubling of the standard deduction and an increase in the child tax credit. Wealthy Americans, like Trump, would benefit from the repeal of the alternative minimum tax and phase out of the estate tax.

Some two-income, upper middle-class families would pay more after being bumped into a higher tax bracket and losing a valuable deduction on state income taxes.

GOP leaders briefed rank-and-file lawmakers on the proposal Thursday morning ahead of a show-of-unity event at the White House with Trump.

“Today is the day. We are introducing legislation that will cut your taxes & make the entire system more simple. This will be a game-changer,” Speaker Paul Ryan, R-Wis., said on Twitter.

The proposal would leave intact the existing rules on 401(k) retirement accounts and the ability of Americans to contribute up to $18,000 into the accounts tax-free. But the plan limits the widely used deduction for mortgage interest for new home loans of $500,000 or less, a sharp reduction from the current $1 million cap.

The plan also limits the deductibility of local property taxes to $10,000 while eliminating the deduction for state income taxes, which has generated significant opposition from Republicans in high-tax states such as New York and New Jersey.

The tax-writing Ways and Means Committee will work on finalizing the proposal next week, and the GOP’s ambitious timetable to get a bill to Trump by Christmas faces numerous roadblocks. The proposal caused anxiety for some House Republicans and drew criticism from a few in the Senate, which is intent on writing its own bill.

Rep. Dan Donovan, R-N.Y., said he still had concerns about the state and local tax deduction, and planned to meet with leadership.

“We’re going to look at all of this to see how it all plays out,” he told reporters as he emerged from the GOP caucus.

The plan shrinks the number of tax brackets from seven to three or four, with respective tax rates of 12 percent, 25 percent, 35 percent and a category still to be determined. The tax system would be simplified, and most people would be able to file their returns on a postcard-sized form.

The plan sets a 25-percent tax rate starting at $90,000 for married couples, with a 35 percent rate beginning to bite at $260,000 — which means many upper-income families whose top rate is 33 percent would face higher taxes. Individuals making $500,000 and couples earning $1 million would face the current Clinton-era top rate of 39.6 percent.

The plan slashes the corporate tax rate from 35 percent to 20 percent, a Trump demand. It also repeals the inheritance taxes on multimillion-dollar estates.

“There are a lot of people still in our conference who are anxious to see exactly how this plays out with growth in the economy, what the long-term deficit and debt situation turns out to be,” said Rep. Steve Womack, R-Ark.

The legislation is a longstanding goal for Capitol Hill Republicans who see a once-in-a-generation opportunity to clean up an inefficient, loophole-cluttered tax code.

The plan calls for nearly doubling the standard deduction used by most average Americans to $12,000 for individuals and $24,000 for families, and increasing the per-child tax credit. On net, it could mean tax increases for many upper middle-income families.

The emerging plan would retain the Clinton-era 39.6 percent income tax rate for the wealthiest earners. But for that highest bracket, the tax writers raised the minimum level of income to $1 million for couples or families from the current $470,000 — a change that would reduce tax revenue.

Democrats have repeatedly complained that the plan was too favorable to business and to the wealthy, and contradicted Trump’s rhetoric of bringing tax relief and economic benefit to the stressed middle class.