National FOCUS: Ikea Recalled Millions of Dressers That Were Killing Toddlers; This Family Found Out Too Late
National 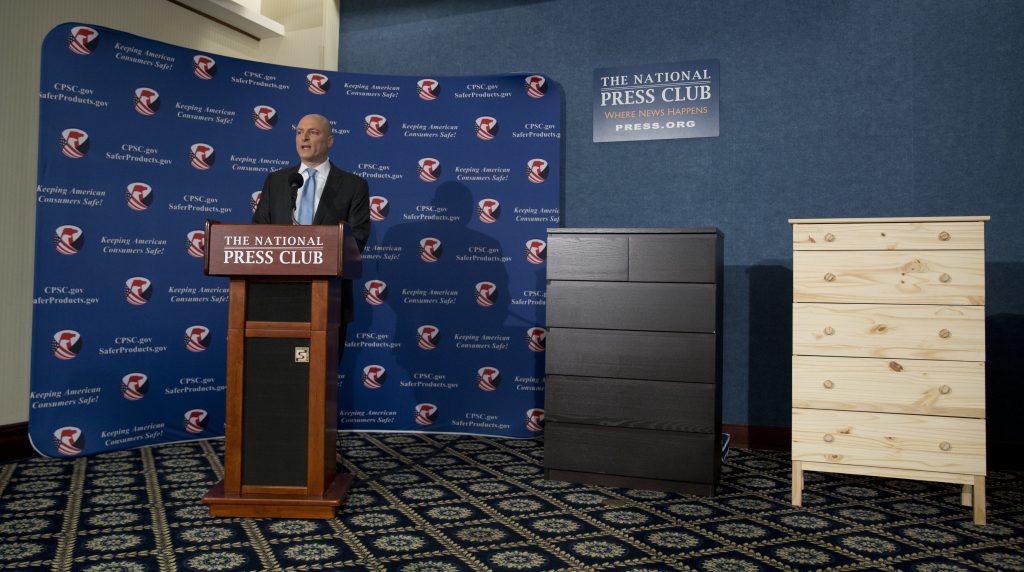 Jozef Dudek had just been put down for a nap at home in Buena Park, California, when his father went to check on him – and made a horrifying discovery: The 2-year-old was crushed under an Ikea dresser and could not be revived.

The toddler’s death on May 24, the details of which were released for the first time several days ago, was at least the seventh death of a child attributed to Ikea dressers and chests – and the fourth from the Swedish furniture giant’s Malm line. And its occurrence raises questions about the effectiveness of Ikea’s massive recall, which the company issued for some 30 million dressers, including the Malm line, in June 2016.

The family’s lawyer, Alan Feldman, said the Dudeks will likely sue Ikea. The Dudeks did not know about the recall, even though it applied to the dresser they had put in Jozef’s room, Feldman said in a statement.

“What makes this death more heartbreaking is the fact that last year’s so-called recall was poorly publicized by Ikea and ineffective in getting these defective and unstable dressers out of children’s bedrooms,” said Feldman.

On Friday, Ikea offered condolences to the family. “The initial investigation indicates that the chest involved in this incident had not been properly attached to the wall,” a company statement said.

The company defended the 2016 recall and its efforts to publicize it, saying that it worked with U.S. media outlets for coverage, launched a national advertising campaign and posted information about the recall prominently online and in its stores.

It has continued to promote the recall this year; the most recent campaign took place this summer, Ikea said. “We have worked hard to make participation in the recall as easy as possible for consumers,” the company said.

Jozef’s story mirrors those of three other toddlers, all about two years old, all dead after Ikea’s Malm dressers toppled onto them. The furniture lines were not compliant with the industry safety standard in the United States, which is voluntary, government regulators have said.

“Little kids are curious enough to pull out dressers and look for things and even climb, but they do not have the maturity or body strength to move a dresser on top of them,” Feldman said. “They’re particularly vulnerable at that age, which is why I think you see these injuries and deaths.”

At least four children have died and 41 have been injured from tipping Malm dressers, according to the U.S. Consumer Product Safety Commission; other Ikea chests have caused three deaths and 19 reported injuries.

At the time of the recall, the CPSC said the noncompliant dressers posed “a serious tip-over and entrapment hazard that can result in death or serious injuries to children.”

Ikea offered a full refund to customers who purchased certain lines of dressers and chests after 2002, including the Malm line, and partial refunds for those made before. Customers with the dressers could arrange to have them picked up for free or could drop them off at any Ikea store. The company also offered free wall-anchoring kits for those who chose to keep their dressers, as well as assistance anchoring the units.

The dressers have since been redesigned to be brought up to compliance, the company said.

According to the CPSC, 97 children died from furniture that tipped over between 2000 to 2015. A CPSC spokeswoman said a child is injured by tipping furniture in the United States an average of every half-hour and that furniture-related deaths occur about once every two weeks.

Unsecured appliances and furniture are among the top hazards for children at home, according to the agency.

A recent CPSC report estimated that from 2013 to 2015, 33,100 people were treated annually in hospital emergency rooms for injuries involving appliances and furniture. More than half – 52 percent – involved children under the age of 18. And in 61 percent of the cases, the injuries were caused by furniture falling or tipping over.

In June 2015, the agency launched “Anchor It,” a public-education campaign to prevent such accidents.