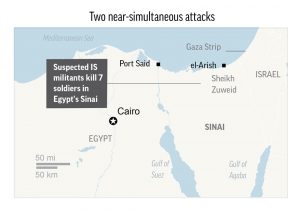 Islamic terrorists on Monday staged a two-pronged assault in the heart of the largest city in Egypt’s Sinai Peninsula, lobbing grenades and trading gunfire with guards at an unused Coptic church to distract from a bank robbery across the street.

By the time the attack was over, seven people were killed, including a child, and 17 million Egyptian pounds (about $1 million) were reportedly stolen.

The assault came just a day after the Islamic State group attacked military checkpoints in a nearby town, killing nine soldiers. The attacks underscored the extremists’ ability to carry out spectacular assaults despite Egypt’s all-out efforts to contain the long-running insurgency in Sinai.

Monday’s attack unfolded when about two dozen terrorists drove into the center of the coastal city of el-Arish in the morning, then split into two groups, according to Egyptian security officials. One group exchanged gunfire with the guards outside the Church of Saint George, unused for months following a surge in attacks on Christians in the peninsula.

The church assault appeared to be a distraction from the bank heist. The second group of terrorists shot and killed the bank guards, then stormed in and emptied the safe before fleeing the scene two hours later. Three civilians, including a child, three guards and a soldier were left dead, and a total of 15 people were wounded. Women and children were among the wounded, said the officials, who spoke on condition of anonymity because they were not authorized to talk to journalists.

After robbing the bank, Monday’s attackers were caught on camera while fleeing from the scene in a stolen pickup and three motorcycles.

“They looted the entire bank and left explosive devices inside,” a senior security official said. Egypt’s state news agency MENA confirmed that three policemen were killed in an armed attack on the bank in el-Arish.

Though no group immediately claimed responsibility for the assault, it bore all the hallmarks of the Sinai-based Islamic State affiliate, which is leading the insurgency in Sinai.

The timing and the location of Monday’s attack — a busy commercial street in the heart of el-Arish — reflected the sheer confidence of the terrorists in carrying out such an assault despite heavy deployment of security forces in and around the city. It also shows that the Egyptian forces’ effort to rein in the terrorists has left them short of cash at a time when IS is fast losing the vast territories it seized in 2013 and 2014 in Iraq and Syria.

The recent uptick in violence in Sinai also comes at a time when Egypt and the militant Palestinian Hamas group, which rules the neighboring Gaza Strip, have joined efforts in curbing the smuggling of weapons, goods and militants between the two sides. Egypt has also mediated a reconciliation agreement between Hamas and its Palestinian rival, Fatah, which rules over Yehudah and Shomron.

The attacks spread panic in el-Arish, which has been under a state of emergency and curfew since a series of deadly IS attacks in 2014. A bank employee appeared to have been kidnapped in Monday’s attack, the officials also said.

Security forces cordoned off the city center and evacuated residents living in the building housing the bank. Pictures posted on social media by locals from el-Arish showed schoolgirls fleeing a school located near the bank and the church.

Schoolteacher Ashraf Hanafi told The Associated Press that he rushed to his daughters’ school as he heard the gunfire. On his way, he said he saw terrorists brandishing rifles and running toward the bank. He said he also saw two men, bleeding as they lay on the ground.

On Sunday, IS terrorists killed nine soldiers in a series of attacks that targeted checkpoints across the nearby town of Sheikh Zweid. IS claimed responsibility for the attack in a statement on the extremists’ Aamaq news agency. The army said 24 attackers were killed.

Last Thursday, six policemen were killed in another terrorist attack in el-Arish.

The Islamic insurgency in northern Sinai has gathered strength since the military overthrew the country’s elected but divisive Islamist president, Mohammed Morsi, in 2013. The IS affiliate in Egypt has focused its attacks on Coptic Christians, the army and police. Thousands of Christian families have fled el-Arish in recent months. Over 100 Egyptian Christians have been killed in IS attacks since December, prompting the declaration of a nationwide state of emergency in April.

St. George’s, the church in el-Arish, was attacked twice before, first during the uprising against longtime autocrat Hosni Mubarak in 2011, and again after Morsi’s ouster.

One of those who left el-Arish, Father Mikhail, says only 10 Christian families remain in the city. In the last attack, terrorists torched St George’s and looted everything inside, even the cables. He said the wardens only managed to rescue a few items, some icons and the church’s most precious possession: the remains of St. George.

In June last year, terrorists gunned down a priest from St. George’s while he was walking along a street.

The largest IS attack in Sinai came in 2015, when Islamic State terrorists planted a bomb inside a Russian airliner that blew up over the peninsula after departing from the Red Sea resort of Sharm el-Sheikh, killing all 224 people aboard. It was also IS’ largest single attack in Egypt to date.

In July, Islamic State terrorists killed 23 soldiers in a remote checkpoint in northeastern Sinai — the deadliest assault on the military in the turbulent region in two years.

Sunday’s attacks on military checkpoints prompted Egyptian authorities to postpone the opening of the Rafah crossing with Gaza, which had been due to open for four days. No new date has been set. The opening was part of efforts to ease a decade-old Israeli-Egyptian blockade of the coastal territory.

Issa Kharafeen, a tribal leader, said the Sinai attacks reflect the military’s lack of informants from among the locals as IS has systematically hunted and gunned down anyone suspected of collaborating with authorities.

“The security forces have lost the (source of) information,” said Kharafeen, who himself fled el-Arish after receiving threats from IS over allegations he was cooperating with the army. “They are in need for eyes everywhere.”