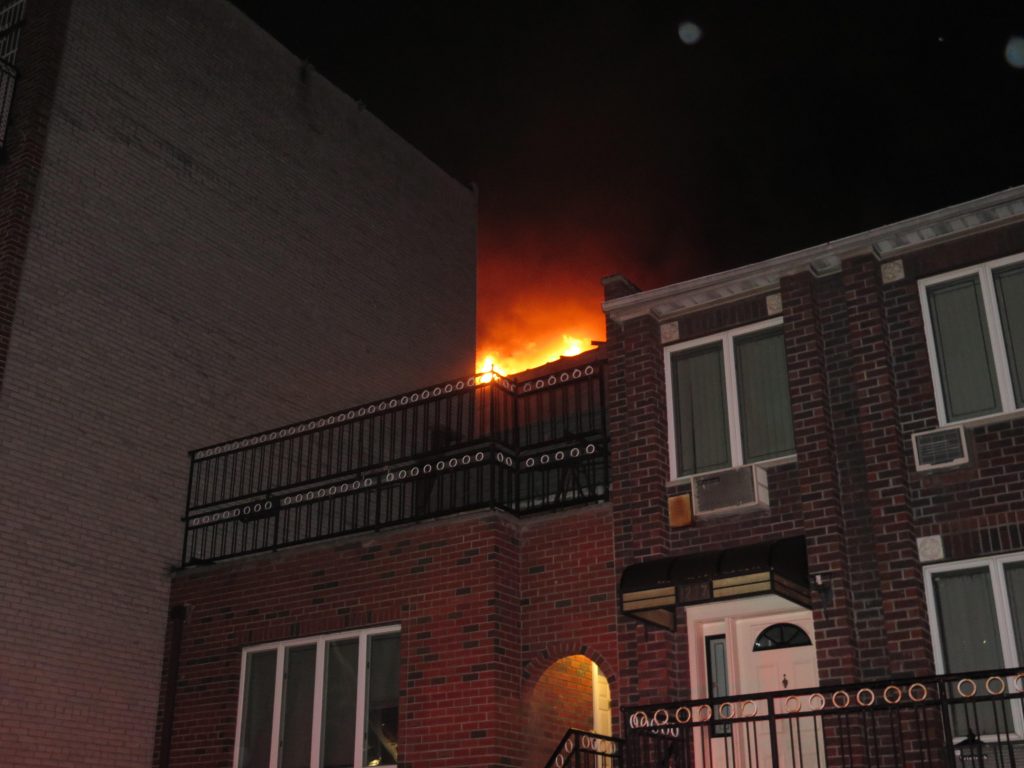 A woman was critically injured when a fire erupted early Monday morning at a condominium building located at 1225 49th Street in Boro Park.

The blaze, which began in a second-floor unit in back of the building shortly after 4:00 a.m., was an “accidental fire which began in a closet as a result of a malfunctioning permanently installed gas heater,” according to the FDNY.

One woman who lives on the first floor told Hamodia that she was awakened by noises and went to look out the yard window, when she saw flames coming out of the porch door of the second-floor unit, and heard a woman on the third floor shouting, “Fire!” She called 911, and ran to the lobby to ring all the bells, waking up the residents and alerting them to flee.

Around 130 firefighters responded to the three-alarm blaze; the FDNY received the call at 4:23 a.m., and the fire was finally brought under control at 5:49 a.m.

One resident, Mrs. Daniella Stauber, was critically injured, losing consciousness before she was transported by Hatzolah to Maimonides Medical Center. Firefighters had difficulty reaching her initially because her window was blocked by protective bars.

On Monday morning and early afternoon, many residents stood outside the building, awaiting word from NYPD, FDNY or Buildings Department personnel on when they would be allowed to go inside and retrieve some possessions. Most residents had fled with nothing but the clothes they were wearing. One woman who lives on the block brought out a coat and sweatshirt for a resident holding her baby on a windy, chilly day; another resident wheeled her child in a stroller borrowed from a neighbor.

Finally, later in the afternoon, residents were allowed to go in and retrieve possessions.

Residents who spoke with Hamodia, all on condition of anonymity, said they were staying with friends, family or neighbors.

After the FDNY extinguished the fire, the Buildings Department came down to check on the building’s habitability. The Buildings Department found that one resident had a sukkah blocking the fire escape, and issued a fine, though in this instance, baruch Hashem, the sukkah did not prevent any families’ escape.