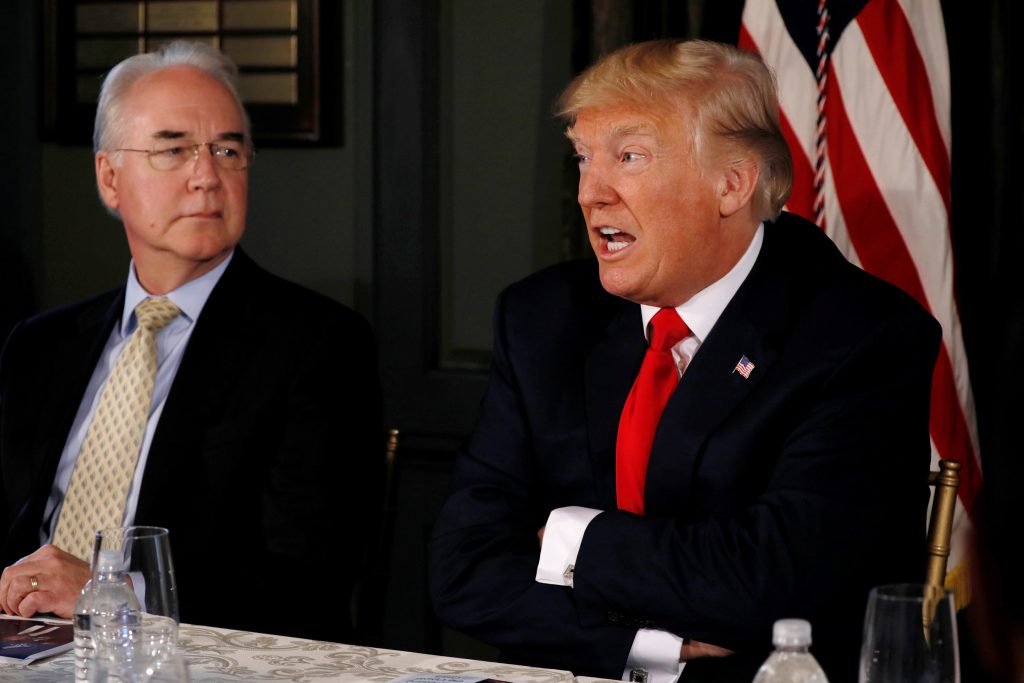 Health and Human Services Secretary Tom Price resigned under pressure from President Donald Trump on Friday in an uproar over Price’s use of costly private charter planes for government business.

His abrupt departure was announced an hour after Trump told reporters he was disappointed in Price’s use of private aircraft and did not like the way it reflected on his administration.

“Secretary of Health and Human Services Thomas Price offered his resignation earlier today and the president accepted,” the White House said in a statement.

Trump named Don Wright to serve as acting secretary. Wright is currently the deputy assistant secretary for health and director of the office of disease prevention and health promotion.

Candidates to succeed Price included Seema Verma, who is administrator of the Centers for Medicare and Medicaid Services and who is close to Vice President Mike Pence, and Scott Gottlieb, a physician who serves as commissioner of the Food and Drug Administration, according to industry analysts.

Several sources saw Gottlieb as a clear front runner. They said he got along well with the White House and is viewed favorably there.

Price’s resignation leaves Trump with a second Cabinet position to fill. He has yet to pick a secretary for homeland security after hiring former Secretary John Kelly as his White House chief of staff.

Price, a former congressman, was instrumental in the Trump administration’s policies aimed at undercutting Obamacare, as well as working with governors across the country to slowly begin unraveling parts of the law.

In a resignation letter, Price offered little in the way of contrition. He said he had been working to reform the U.S. healthcare system and reduce regulatory burdens, among other goals.

“I have spent forty years both as a doctor and public servant putting people first. I regret that the recent events have created a distraction from these important objectives,” he said.

Trump, currently trying to sell his tax cut plan and oversee the federal response to devastation wreaked by three hurricanes, saw the Price drama as an unnecessary distraction and behind the scenes was telling aides “what was he thinking?,” a source close to the president said.

Price promised on Thursday to repay the nearly $52,000 cost of his seats on private charter flights. “The taxpayers won’t pay a dime for my seat on those planes,” Price said.

But that was not enough to satisfy Trump.

Trump told reporters that the “optics” of Price’s travel were not good, since, as president he was trying to renegotiate U.S. contracts to get a better deal for taxpayers.

“Look, I think he’s a very fine person. I certainly don’t like the optics,” Trump said.

Price had also been seen in the White House as having been ineffective in getting Congress to pass healthcare reform legislation, an effort that has fizzled on Capitol Hill.

Price was one of a handful of senior officials in Trump’s administration put on the defensive over reports about their use of charter flights and government aircraft, sometimes for personal travel, when they could have flown commercial for less money.

The White House issued an order late on Friday saying use of private planes required approval from White House Chief of Staff John Kelly and that the commercial air system was appropriate even for very senior officials with few exceptions.

Washington news media outlet Politico has reported that Price had taken at least two dozen private charter flights since May at a cost to U.S. taxpayers of more than $400,000. Politico also reported he took approved military flights to Africa and Europe costing $500,000.

Senior U.S. government officials travel frequently, but are generally expected to keep costs down by taking commercial flights or the train when possible.

Environmental Protection Agency Administrator Scott Pruitt and Treasury Secretary Steve Mnuchin have also been in the spotlight for their travel habits.