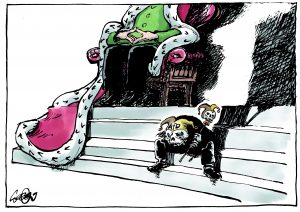 Holocaust memory is short. This week’s election in Germany in which the right-wing nationalist AfD (Alternative for Deutschland) party garnered a double-digit vote illustrates exactly how short. Germans are in the process of shedding their guilt and sense of responsibility for their Nazi past.

At the end of World War II, the United States and its allies forced Germany into a program of de-Nazification that affected its culture and thoughts for the next almost 80 years. There have been a few hiccups along the way: In 1985, Chancellor Helmut Kohl angered most Jews when he convinced the unwitting President Ronald Reagan to join him on a visit to a German military cemetery that held the remains of Nazi soldiers and SS members. Over the years, sundry politicians have felt that enough time had passed since the war, and it was time for Schlusstrich, a bottom line for Holocaust remembrance and restitution. For the most part, though, Germany tried its best to express its remorse in both word and deed.

The change in attitude actually began with the reunification of Germany in 1989. Eastern Germans had always expressed the view that they had never been Nazis, because they claimed that as Communists, they had opposed Nazism. This highlights the fact that almost half of Germany was never de-Nazified, or even educated about its Nazi past until the fall of the Berlin Wall.

It is, therefore, surprising that in Germany only 13 percent of the voters chose right wing anti-immigrant candidates. Those voters were reacting to a real issue. Their chancellor had invited in more than one million immigrants from Muslim countries. These immigrants were unwelcome everywhere else, including the United States. The 13 percent looks good in comparison with the rest of Europe. In France, Marine Le Pen’s National Front received almost 34 percent of the vote in recent elections. Populist parties have been gaining across Europe, and are already in power in Hungary and Poland.

It is clear that the nation that built Auschwitz, that passed the Nuremberg Laws and murdered six-million Jews under the leadership of Adolf Hitler, needs to do more than any other country to fortify its young democracy. However, it is human nature to forget. In Germany, there has been a forgetting. The mayor of Berlin, who supports BDS, has forgotten the government’s support of Israel as a basic principle.

The Nobel laureate author Gunther Grass has forgotten his country’s culpability when he writes that Germans also died during World War II. Germans who formed the Kriegskinder association to help descendants of Nazi perpetrators deal with their trauma have forgotten.

Now, the AfD and 13 percent of Germany’s voters have forgotten that Germany, because of its past, needs to be different if it is to survive as a democracy. They cannot insist that school curriculums focus more on positive, identity-uplifting episodes in German history and less on Nazi crimes.

Germany is at a crossroads. Chancellor Merkel, who has led Europe’s most powerful country for the past 12 years, has done almost everything right. She was, however, unprepared for the reaction to doing too much of what her humanism saw as the right thing to do. She needs to be careful during her current term in office. She needs to be wary of the 13 percent by making Germany safe again following the violent terrorism experienced over the past several years.

We Jews stand in between open immigration and safe and secure streets. We need both. Mrs. Merkel has to deliver.

Israel Singer is professor of politics at Touro College and University System. He is president emeritus of the Conference on Material Claims Against Germany.

This article appeared in print on page 8 of the September 27th, 2017 edition of Hamodia.