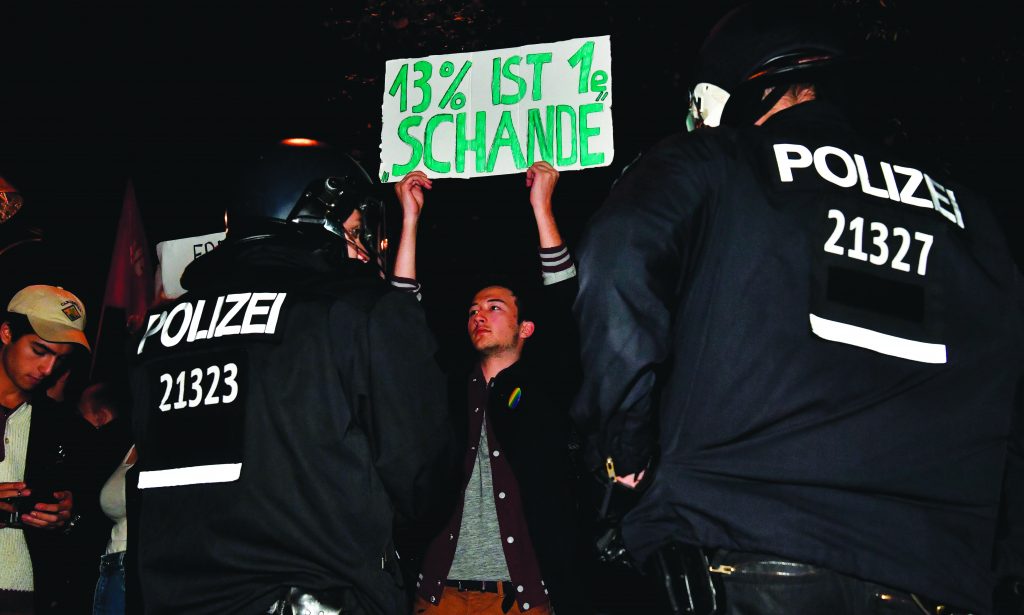 News that the nationalist and populist Alternative for Germany (AfD) party will now be represented in parliament for the first time has been greeted with alarm by leaders of the country’s Jewish community. While not concerned that Jewish life faces immediate threat, they expressed clear discomfort over the destabilizing effect caused by the party’s electoral gains and rise to prominence.

AfD, which will now have roughly 90 seats in the 630-member Bundestag, is the first far-right party to have passed the required threshold to enter the governing body since World War II. While it is one of several parties that have recently risen to prominence in Western Europe on an outspokenly anti-immigration and anti-Muslim line, its ascent in the nation that perpetrated the Holocaust has garnered additional concern from many quarters.

“The stability of the German political system is what has made it possible for Jews to live safely and comfortably in Germany,” he told Hamodia. “I don’t think that anyone in the Jewish community is happy about this. The ones that are more disengaged are indifferent and would say that there have been flashes of this in the past and that they are not leading the government anyway. Those who are more aware are more concerned.”

Referring to a statement made in the wake of AfD’s victory that the party’s representatives would “hunt” Chancellor Angela Merkel from their position in parliament, Rabbi Spinner said it seemed to confirm that the party did not intend to tone down its signature incendiary rhetoric.

“AfD has changed the parameters of what language can be used in the public forum. To say they are going to ‘hunt down Merkel’ is not the kind of thing we are used to hearing,” he said.

In several European countries, attempts to curb the size and influence of Muslim communities have led to attempts to outlaw religious slaughter methods and circumcision, efforts that have won support from left-wing groups as well. Rabbi Spinner said that while he felt AfD would support such initiatives, it was not an immediate concern.

“It’s not about policy issues, it’s about a change in the political culture, a change in what’s acceptable, which is not good for Jews living here,” he said. “They probably would vote against milah or shechitah and we would end up as collateral damage, but I do not think these issues will come up in the near future.”

AfD’s 13-percent win was met with outcries and condemnation from much of mainstream German society which said that AfD harkens back to the country’s Nazi past. One of its leaders, Alexander Gauland, denied that his party promotes anti-Semitism and made overtures to meet with Jewish leaders.

“There is nothing in our party, in our program, that could disturb the Jewish people who live here in Germany,” he said.

Several of our sources were hesitant to evaluate the sincerity of Mr. Gauland’s words, noting that the party contains many different elements, some of which have made openly anti-Semitic comments and others which have distanced themselves from such rhetoric.

Rabbi Spinner said that, in general, it is difficult to evaluate whether AfD is any more radical or threatening to minority groups than their counterparts in other European countries.

“AfD is in a process of metamorphosis and they’re changing fast,” he said. “Le Pen, Nigel Farge, Wilders, they have been consistent in what they stood for, for many years, but AfD has changed completely … They started out as a wonky anti-Euro party, but they’ve become more extreme and more openly anti-Islamic. It’s hard to pin down a moving target.”

Despite his disconcertion over AfD’s success, Rabbi Spinner did not think it portrayed a major element of extremism in the German populace, explaining that anger over the country’s decision to welcome more than one million mostly Muslim refugees has more to do with economic and social issues than with anti-Islamic sentiment.

“There is a lot of dissatisfaction in general, particularly in the eastern part of the country. The absorption of what was East Germany did not go well for a lot of people there, and they feel the mainstream parties are not addressing their needs. They see that the factory in their town closed and they are out of work, but if someone from Iraq or Syria comes here, they get all these benefits. It’s not simply that there are a bunch of racists waiting to jump out of their boxes; this is for some people rooted in serious and complicated grievances,” he said. “Had the migrant policy been made by a center-left leader, the protest vote would have gone to the center-right; but since it was Merkel who did it, many people didn’t feel they’re left with much of a choice.”

Dr. Josef Schuster, president of the Central Council of Jews in Germany, the country’s umbrella group of Jewish organizations, spoke out against AfD’s ascendance in strong terms.

“Unfortunately, our worst fears have come true: a party that tolerates far-right views in its ranks and incites hate against minorities in our country is today not only in almost all state parliaments but also represented in the Bundestag,” he said in a statement. “I expect all our democratic forces to unveil the real face of the AfD and to expose the party’s empty, populist promises.”

Rabbi Zsolt Balla, who leads a kehillah in the eastern German city of Leipzig, said that his experience as an immigrant from Hungary gives him a unique feeling of apprehension over AfD’s gains.

“In Hungary, we already have experienced what happens when a party like this gets into parliament. It’s made a massive change in the way that a lot of people think, not for the better,” he said. “I don’t expect to see policy changes, but the language they use destroys the foundations of a democratic society.”

The rhetoric that AfD has used, Rabbi Balla said, reminded him of the strategies used by an aspiring “fascist dictatorship.”

“They [dictatorships] have a prerequisite to destroy the feelings of what can and can’t be said and to de-humanize their enemies,” he said. “They do everything they can to make people feel they are under attack and that we have to defend ourselves. It legitimizes people’s fear and is unfortunately effective.”

Regardless of his strong reservations, Rabbi Balla did not think that AfD’s role in parliament would lead to a mainstreaming of anti-Semitism or a reversal of Germany’s openness about its role in the Holocaust.

“I don’t think we are about to see Holocaust denial in Germany at this point in time,” he said. “I’m currently still happier to be in Germany than elsewhere … It’s the only place that owns up to what happened during the War. Even these right-wing populists have to look for friendships in the Jewish community for legitimacy. I don’t know if these boundaries can be broken or if society can control it. I’m not a navi; we’ll have to see.”

As is the case with many kehillos in modern-day Germany, Leipzig’s is largely made up of immigrants from the former Soviet Union. Rabbi Balla said that many of his congregants are not citizens and, as such, do not have the right to vote. This, coupled with the fact that many mostly-Russian speakers follow mostly Russian-language media, has led to a muted response to the latest development.

“Most of them are apathetic [to the election results]. Many of them boil the whole thing down to the chancellor disappointing the country over the migrant policy. They don’t realize it’s the same policy that let them in, too, but the way they look at it is complex,” he said. “We don’t know where this is going to take us, and Hashem is running the show … I am not worried that we are going to see changes tomorrow, but it lets an undesirable genie out of the box.”