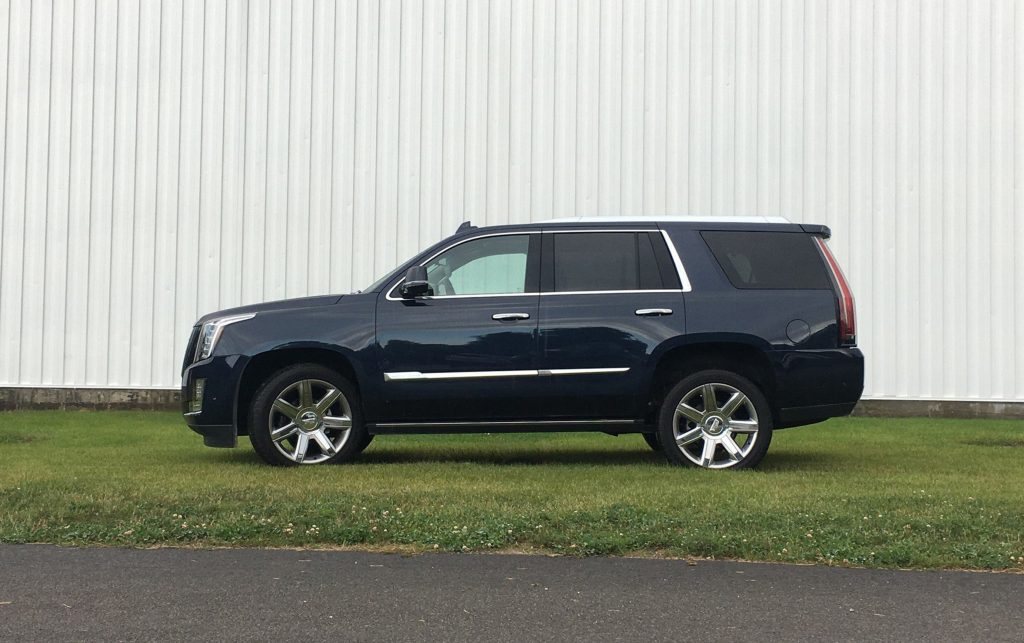 Getting the Cadillac of SUVs for an epic camping trip with seven other families over Labor Day weekend promised certain safeguards: We could help bring stuff other families couldn’t fit; we could sleep in it should inclement weather or creatures descend on our site; we wouldn’t need to make bathroom breaks on the way without filling up for gas.

None of these proved to be true.

The Escalade was remarkably efficient for a full-size SUV, netting 23.4 mpg after 300 miles in a mix of stop-and-go urban traffic, highway flying and country road cruising, thanks to cylinder deactivation, where the V-8 gets reduced to V-4 for efficiency’s sake.

Most surprising about the Escalade, which barely fit in our two-car suburban garage in both height and length, was that it had less room than the minivans driven by other families. For being this big and this bold, the Escalade is not that large.

Both the Chevy Suburban and the Honda Odyssey minivan have more than double the cargo volume. Cadillac offers an even bigger Escalade in the stretched ESV version, which is nearly two feet longer and costs only $3,000 more. The extended wheelbase might call for an extended garage, of course, but it makes me wonder why bother with the smaller — less large — Escalade.

Perhaps it’s best as a sleek people hauler, which is why there are so many livery models with tinted windows shuttling passengers from airports to downtowns. It has a commanding road presence, with a broad and tall trucklike fascia glinting with chrome, and some of the most vertical lights, both front and especially rear, this side of a runway. Premium Luxury trim, a cringeworthy linguistic redundancy, comes with 22-inch wheels, making for an attractive and unapologetic profile of bigness.

Since the third row seats are above the rear axle, there isn’t much room back there for an adult. The seat is higher, so there’s less headroom, and feet and knees are higher than in the midrow seats, too. It’s fine for short trips around town, but anything more will tax passengers’ patience.

Sharing the Silverado pickup truck platform, Escalade is remarkably comfortable and quiet on the highway. The cabin is decked out in luxurious finishes, such as wood trim on the console and door panels, but also has some subtle truck elements, like a steering column-mounted gear shifter. The touch-sensitive Cue system is neither here nor there; it’s sleek and glossy in what you’d expect from the Cadillac of SUVs, but firm buttons would be more functional. The voice commands are excellent and Cadillac’s use of vehicle info on both sides of the speedometer render the touch screen — the only small thing in the truck — unnecessary, aside for navigation.

The 4WD tester tows up to 8,100 pounds, and the rear camera in the rearview mirror as well as the split-screen rearview camera in the console should provide plenty of eyes for when this beast goes into reverse.

Again, fuel economy is remarkable for a vehicle this size. Its 26-gallon tank didn’t demand any stops on our interstate road trip, despite being rerouted to city streets thanks to a highway backup. The 2018 model gets an even more efficient 10-speed transmission.

Visually, the Cadillac of SUVs is sharper than the competition, from the Infiniti QX80 and Lexus LX to the Lincoln Navigator. But as a go-anywhere, haul anyone and everything vehicle, the Escalade comes up short.

Parting shot: Big but not large