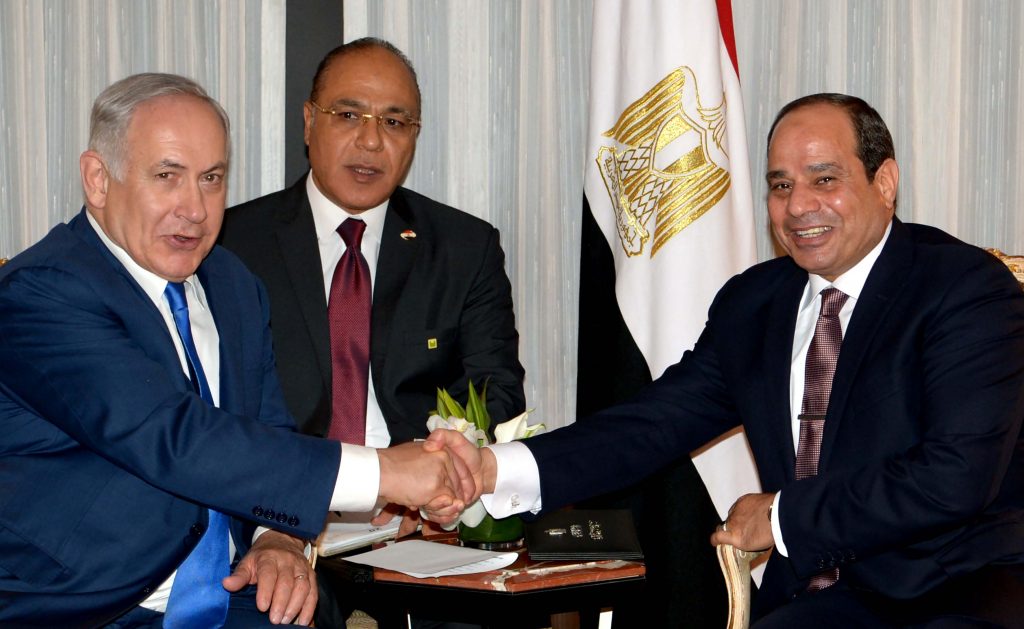 Prime Minister Binyamin Netanyahu and Egyptian President President Abdel Fattah al-Sisi were photographed smiling and shaking hands in a meeting at the sidelines of the U.N. General Assembly, but the whole world was not smiling with them.

In Israel, where there have been frequent reports of closed-door meetings with Arab leaders, and Mr. Netanyahu himself has touted his expanding contacts with them, the news of a friendly get-together with Sisi created no stir.

Egypt was less comfortable with it. Sisi’s trip to the U.S. was covered and the meeting with Mr. Netanyahu – handshake included – was mentioned, though not prominently featured. Al-Ahram, the largest newspaper in Egypt did not mention the meeting on its homepage.

A bland statement from al-Sisi’s office said the talks focused on “resuming negotiations between the Israeli and Palestinian sides to reach a comprehensive solution.” The two leaders discussed “ways to resume the peace process and establish a Palestinian state,” the statement said, while ignoring the likely topic of recent developments in the Egypt-Hamas-Fatah triangle.

The Times of Israel lauded Sisi for his courage: “In meeting publicly with Prime Minister Binyamin Netanyahu, [al-Sisi] has once again proved that he is the bravest Arab leader in the region.

“[Al-Sisi] dared to do what other Arab heads will only do under the radar — sit down with Israeli leaders, among them Netanyahu and Defense Minister Avigdor Liberman.”

It was not long after Egyptian President Anwar Sadat signed the Camp David Treaty with Israel that he was assassinated by Islamic terrorists. It’s something that cannot be far from his successors’ minds when dealing with Israel.