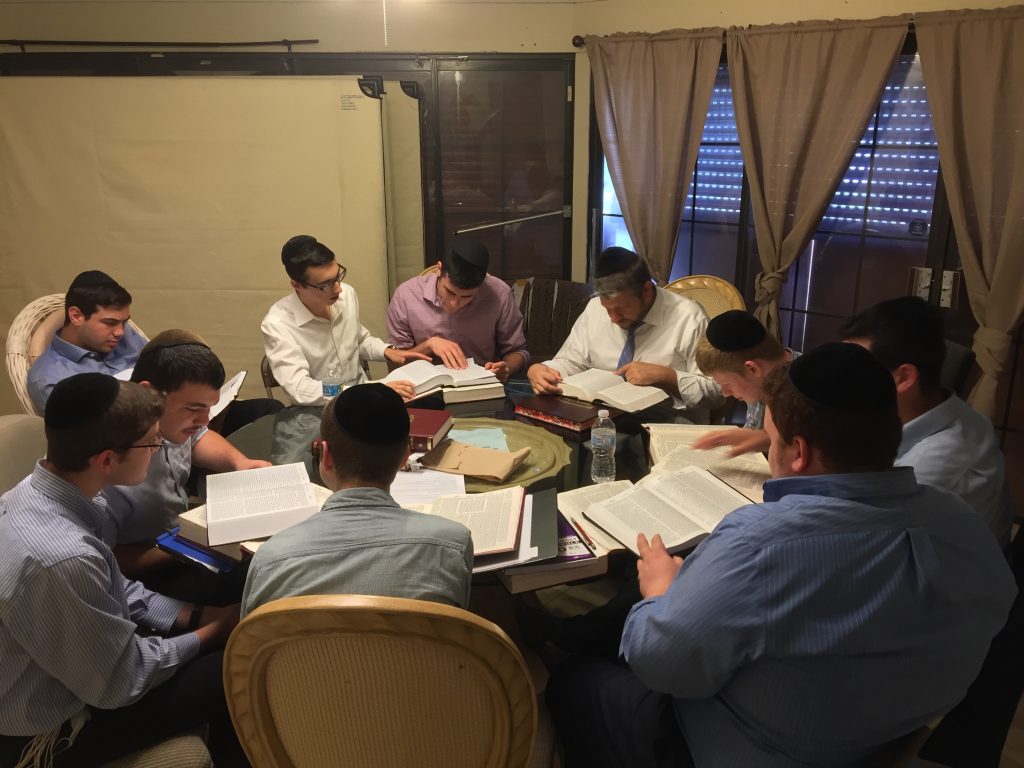 As Hurricane Irma tore through South Florida, neither the pounding rains nor the record-setting winds could extinguish the flame of Torah. After boarding the windows, sealing the doors, and stocking the pantry, yeshivah bachurim turned to the only true shemirah Klal Yisrael has ever known.

The tension in the town had risen steadily all of last week, as forecasts showed the eye of the storm passing directly over the Miami area. North Miami Beach is approximately three miles from the ocean, so there was no major concern of flooding, but record winds were predicted.

The yeshivah sent half its high-school dorm students to Orlando for Shabbos and the other half to Atlanta, together with Rebbeim and their families, and shiurim were held in those towns.  An optional seder was held Friday in North Miami Beach for the in-town high school students.

But 20 beis medrash bachurim remained in North Miami Beach, despite all having been given permission to leave.

On Friday, the yeshivah had a “hilchos hurricane she’eilos uteshuvos” session with Harav Ephraim Friedman, a posek from Chicago, via a live hookup. All sorts of issues were discussed, such as when one has to expect that an eruv has come down, and whether items can be brought inside to prevent monetary loss.

Rabbi Friedman said that radios may be left on over Shabbos, if it’s important for safety or even psychological comfort. Virtually all Jewish homes in the area left a radio on over Shabbos, in a side room and at a low volume.

Though the stress levels throughout South Florida were building all week, the bnei hayeshivah, two weeks into Elul zman, were confident in the shemirah provided by Torah.

“The three major hurricanes that occurred in the Miami area during the past 25 years — Andrew, Katrina and Wilma — were all during bein hazmanim,” Avrohom Eliezer Friedman, administrator of Yeshiva Toras Chaim Toras Emes, told Hamodia.

Indeed, when asked by residents of North Miami Beach whether they should evacuate ahead of Irma, Hagaon Harav Shmuel Kamenetsky, shlita, replied, “If the yeshivah is there, you have nothing to worry about.”

Since it would be very dangerous to even step outside during the storm, all the beis medrash bachurim left the dorm building and moved into the yeshivah building itself for Shabbos, as did two of the Roshei Yeshivah and their families, sleeping in classrooms.

Throughout Shabbos, the bachurim kept their regular sedarim.

“We had tremendous nisim and siyatta diShmaya throughout the storm,” Rabbi Yisroel Niman, one of the Roshei Yeshivah, told Hamodia. “We had learning, kumzitzes, seudos, shmuessen, minyanim, like regular yeshivah — even better than in the normal [routine]. And special tefillos, as you can imagine.”

Shortly before Shabbos, the meteorologists said that the storm was moving westward. Finally, on  Shabbos day, when the community found out that the storm’s direct path would indeed be up the Gulf Coast rather than the Atlantic Coast, there was a collective sigh of relief.

Families in the community began losing power Shabbos afternoon, but the yeshivah did not. On Sunday as well, even as the winds howled, the trees swayed and power lines came down all around, the yeshivah’s power remained on, as the bachurim learned full, intense sedarim. During the lunch break, the power briefly went out — but came back on in time for the beginning of second seder.

It was not until 12:30 a.m. Monday morning — long after most buildings in the area had lost electricity, and, in fact, after the storm had passed the area — that the yeshivah building lost power as well.

On Monday, the yeshivah held first seder outside, and second seder in a home in North Miami Beach that had power. (Staying indoors without air conditioning in the oppressive Florida heat is extremely difficult; moreover, the yeshivah is in pitch darkness, without electric lights or power to even plug in drills to remove the window boards.

On Tuesday, a donor allowed the yeshivah use of an air conditioned warehouse near Hollywood for first seder; second seder was once again held in a home in North Miami Beach. The yeshivah had planned to move to the Chofetz Chaim afiliate in Boca Raton (see below) from Tuesday evening until power was restored, but, baruch Hashem, just as they were preparing to pack and leave for Boca, the electricity in the North Miami Beach yeshivah was restored.

Outside, power lines are strewn about, trees lie in the streets and the roads are impassable. But in the koslei beis hamedrash — whether in the yeshivah building, an outdoor lawn or a makeshift warehouse — the kol Torah of Yeshiva Toras Chaim Toras Emes continues unabated.

The yeshivah, in its fourth year of existence, currently learns in a local shul, uses trailers for classrooms and rents two homes for dorms, as it plans its beautiful new campus.

On Friday, the high school had an optional seder, which all the bachurim whose families had remained in Boca attended.

With the shul boarded up for the hurricane, all 32 beis medrash bachurim moved into one of the dorm houses — to ensure that they’d be able to learn together even during the worst of the storm — along with one of the Roshei Yeshivah, Rabbi Yigal Abramchik.

The yeshivah had stocked the dorm with enough food to last a week, and the boys enjoyed a Shabbos as beautiful — or even more beautiful — than any other.

Once they realized that the storm wouldn’t be as severe as previously thought, the boys who normally slept in the other dorm house were able to leave at night to sleep in their own beds. But other than sleeping, 32 boys and the devoted Rosh Yeshivah spent all of Shabbos and Sunday packed into a single home, which truly served as a mikdash me’at.

The bachurim had a full slate of tefillos, seudos, sedarim, oneg Shabbos, and melaveh Malkah.

Though much of Boca Raton lost power, the housing development in which the dorm buildings are located did not, and the learning was able to continue undisturbed.

There were several dozen instances in which the lights went out — the boys had lanterns, flashlights and candles prepared — but they always went back on after just a few seconds.

Boca Raton was not hit as badly as the Miami area, and by Monday the town was mostly back to normal.

On Monday, the Boca yeshivah held morning seder and gave the boys the afternoon off so that they could breathe a bit more freely after having been packed into one house over the weekend, but they returned for night seder.

“Maskil” is a lashon of sechel, but an unusual one — it is a realization of the importance of tefillah: When we are in desperate situations such as a hurricane, we realize that only Hashem is in control of what happens to us. But we must learn from situations like these and apply them to our daily lives: that Hashem is always the only One in charge, even in situations when it may not seem as apparent.

Rabbi Abramchik likewise cited a vort from Hagaon Harav Naftali Trop, zt”l, on the passage in the Yamim Nora’im tefillos, k’dalim u’ch’rashim dafaknu delasecha: Rav Naftali says that one who is rich is just as reliant upon Hashem as someone who has nothing.

As the yeshivah’s director, Rabbi Yoel Goldberg, told Hamodia, “While the winds were blowing and everyone outside was cowering in fear, inside one little, boarded-up house, the kol Torah was out-howling all!”