National Irma Knocks Out Power to About 7.3 million, Could Take Weeks to Restore
National 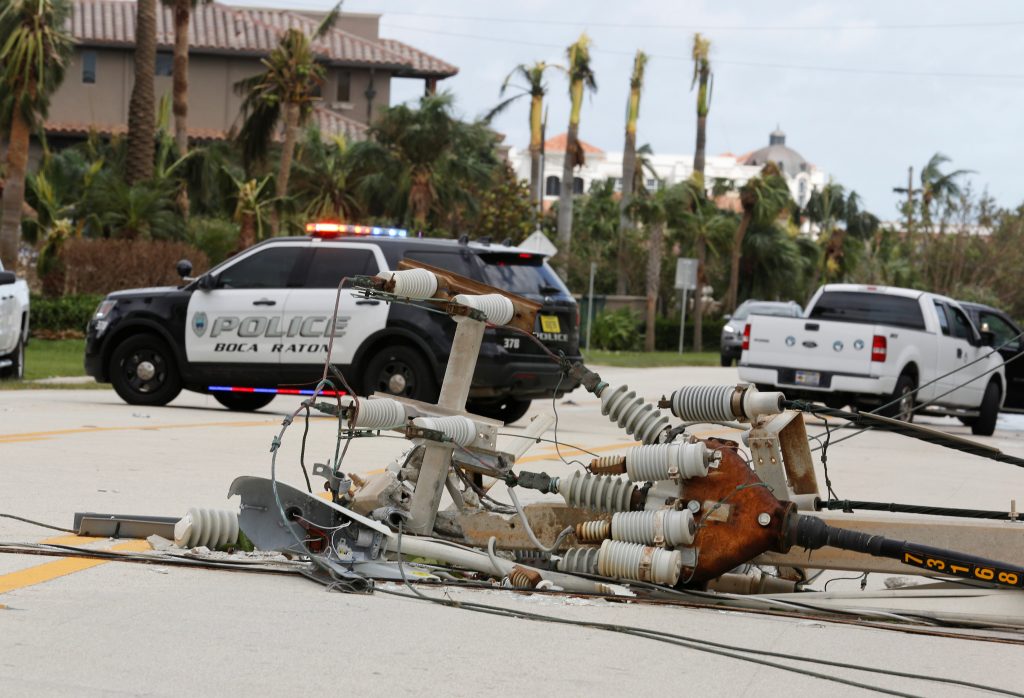 Hurricane Irma knocked out power for about 7.3 million homes and businesses in the U.S. Southeast, mostly in Florida, according to state officials and local electric utilities.

Irma hit southwest Florida on Sunday morning as a dangerous Category 4 hurricane, the second-highest level on the five-step Saffir-Simpson scale. It had weakened to a tropical storm by Monday morning as it headed toward Georgia.

The storm, which was moving into southern Georgia, was packing maximum sustained winds of 60 miles per hour, according to the U.S. National Hurricane Center’s latest update at 2 p.m. EDT.

Power losses in Georgia, which were nearing 900,000 as of 3 p.m. EDT, were expected to increase as the storm moved north.

In Florida, the state’s biggest electric company said its outages dipped to 3.5 million from a peak of 3.6 million earlier on Monday. A total of almost 4.5 million Florida Power & Light customers have been affected by the storm, with about 1 million getting service restored, mostly by automated devices.

“We’ve never had that many outages, and I don’t think any utility in the country ever has,” FPL Chief Executive Eric Silagy said at a news conference on Monday. “It is by far and away the largest in the history of our company.”

FPL said it was still assessing the damage and could not yet say when it would restore service to most customers. Some homes and businesses could be without power for weeks, especially in the hardest-hit areas like southwest Florida, the NextEra Energy Inc unit said.

As the storm pushed north, outage figures were increasing at other large utilities, including units of Duke Energy Corp , Southern Co and Emera Inc.

Duke’s outages held around 1.2 million on Monday afternoon, while Emera’s Tampa Electric utility said outages eased to about 320,000 from a peak earlier on Monday of over 330,000.

FPL said its two nuclear plants were safe. Both units at its Turkey Point facility, about 30 miles south of Miami, were shut by early Monday.

The company closed Turkey Point’s Unit 3 on Saturday as Irma approached the coast, but decided not to shut Unit 4 at that time because the hurricane track shifted away from the plant toward the western part of the Florida Peninsula. FPL shut Unit 4 on Sunday night, however, because of a possible valve problem that was probably not related to Irma, U.S. Nuclear Regulatory Commission officials said on Monday.

At its St. Lucie nuclear plant about 120 miles north of Miami, FPL reduced power at Unit 1 because of salt buildup from Irma in the switchyard, NRC spokesman Roger Hannah said. The plant’s other reactor, Unit 2, continued to operate at full power.

Duke’s retired Crystal River plant, about 90 miles north of Tampa, has spent nuclear fuel, but Hannah said that was not a problem.

As Irma loomed and came ashore, gasoline stations struggled to keep up as people evacuated Florida. In the Atlanta metropolitan area, about 545 stations, or about 13.2 percent of the total, were out of the fuel earlier on Monday, according to information service Gas Buddy.

Irma is expected to sap demand for fuel for a time, Goldman Sachs analysts said in a note on Monday, but they cautioned that supply could remain strained because of refining capacity offline after Hurricane Harvey, which hit Texas two weeks ago.