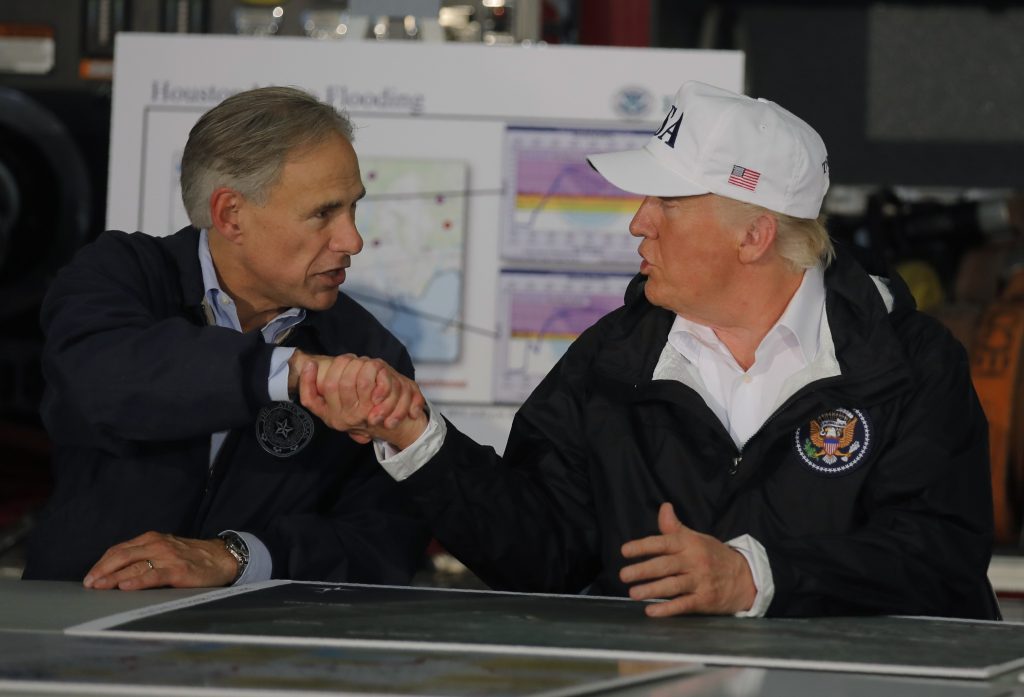 U.S. President Donald Trump arrived in Texas on Tuesday to survey the damage of Tropical Storm Harvey, the biggest natural disaster of his tenure, as record-setting rainfall lashed Houston and tens of thousands of people fled flooded homes.

The slow-moving storm has brought catastrophic flooding to Texas, killing at least 11 people and paralyzing Houston, the fourth most-populous U.S. city. City officials were preparing to shelter up to 19,000 people, with thousands more expected to flee the area as the flooding entered its fourth day.

A wide swath of Houston and its surrounding suburbs were under water and forecasters warned the rain would continue through Thursday, stressing the dams and drainage systems that protect the low-lying U.S. energy hub.

Officials in Harris County, where Houston is located, warned area residents to evacuate as they released water from overflowing reservoirs to alleviate pressure on two dams, a move that would add to flooding along the Buffalo Bayou waterway that runs through the area.

Trump, speaking in Corpus Christi near where Harvey first came ashore last week as the most powerful hurricane to strike Texas in more than 50 years, said he wanted the relief effort to stand as an example of how to respond to a storm.

“We want to do it better than ever before,” he said.

Trump later spoke to a crowd of people affected by the storm.

“This storm, it’s epic what happened. But you know what, it happened in Texas and Texas can handle anything,” Trump said, before waving a Texas state flag over the crowd, standing on a stepladder near a fire truck.

Harvey has drawn comparisons with Hurricane Katrina, which devastated New Orleans 12 years ago, killing 1,800 people. Former President George W. Bush was widely criticized for his administration’s handling of the response to that disaster, taking a heavy toll on public support of his administration.

Trump clearly was aiming to avoid a similar reaction.

An eleventh death was reported on Tuesday – Houston Police Sergeant Steve Perez, 60, a 34-year veteran of the force, whose body was found after apparently drowning while attempting to get to work on Sunday, Police Chief Art Acevedo told reporters.

Acevedo said Perez’ family had urged him not to leave the house because of the dangerous flooding but the officer told them, “We have work to do.”

Some 3,500 people have been rescued from high waters in the Houston area with police, firefighters and National Guard troops continuing to try to locate those marooned in high waters.

Gloria Stilwell, 44, who described herself as a stay-at-home mom, said she agreed with Trump’s assessment that Houstonians were well equipped to handle the storm.

“I totally agree with him. Texas can definitely handle it,” Stilwell said, as she registered to volunteer at a shelter. “I’ve lived here since 1980, through plenty of hurricanes. Texans have always banded together.”

“Texas can handle anything? I just lost my house and three cars. We need help,” Ike said, after being shown Trump’s comments.

The storm broke rainfall records for the continental United States, with one site south of Houston recording 49.2 inches of precipitation since the storm’s start. The rainfall was about what the region typically sees in a year and exceeds 48 inches recorded in 1978.

Harvey has roiled energy markets and wrought damage estimated to be in the billions of dollars, with rebuilding likely to last beyond Trump’s four-year term in office.

After Corpus Christi, Trump was headed to the state capital Austin to meet with officials. Houston was not on his itinerary because much of it is impassable.

About 9,000 evacuees were staying at Houston’s George R. Brown Convention Center and Houston Mayor Sylvester Turner said his office had asked the Federal Emergency Management Agency for assets to allow the city to shelter another 10,000 people.

The slow-moving storm’s centeris likely to remain just off the coast of Texas through Tuesday night before moving inland late Tuesday or early Wednesday, according to the U.S. National Hurricane Center.

Harvey was expected to produce another 6 to 12 inches of rain through Thursday over parts of the upper Texas coast into southwestern Louisiana.

Five of the 10 drilling rigs currently operating in the Gulf also had been evacuated as of noon Tuesday. The bureau estimated that approximately 19 percent of the Gulf’s oil and natural-gas production was “shut-in,” or temporarily halted, as of midday Tuesday. Offshore facilities will be inspected once the storm has passed.

The Texas Gulf is a key area for U.S. oil refineries and oil and gas production.