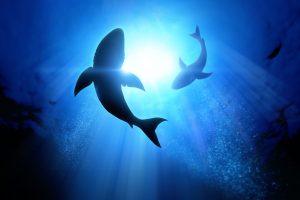 You can’t blame beachgoers on Cape Cod for being jittery after a spate of recent shark sightings, some just a bit too close for comfort but all part of a natural ecosystem that scientists say humans must accept.

Last Wednesday, just off Marconi Beach in Wellfleet, a white shark took a bite out of a paddleboard, throwing its rider into the water. Cleveland Bigelow wasn’t injured, but compared the impact to that of a motorcycle being hit by a truck.

Two days earlier at Nauset Beach in Orleans — also just feet from shore — a white shark fed on a seal, turning the sea red with blood. Terrified swimmers and surfers fled the water.

On Thursday, shark sightings prompted the closure of Race Point Beach in Provincetown to swimming for about two hours.

Shark experts preach vigilance and respect. After all, it’s their habitat, not ours.

“We are the interloper in the ocean,” said Marie Levine, executive director of the Princeton, New Jersey-based Shark Research Institute, the nation’s oldest shark conservation organization.

“White sharks prey on seals. Seals come ashore,” said Levine. “So if seals are coming ashore on any beach, people should stay out of the water there. It’s just common sense.”

White sharks, often called great whites, were around many years, but only recently have the fearsome creatures been catalogued in large numbers off Cape Cod during the summer. Researchers say they’re likely attracted by a seal population that has exploded since the 1972 federal Marine Mammal Protection Act, though additional factors could include changes in ocean currents and the depletion of other food sources by overfishing.

Statistically, risks to people from sharks remain low. The last fatal attack recorded in Massachusetts was in 1936.

No fatal shark attacks were reported in the U.S. in 2016, or so far in 2017. The most recent unprovoked attack of any kind prior to last week’s paddleboard incident occurred Aug. 10 off Hilton Head, South Carolina. A 13-year-old swimmer suffered minor cuts to his foot, possibly from a blacktip shark, according to an incident log kept by the Global Shark Attack File.

“I know people are perceiving this as a banner year and that sharks are increasing and everything, but when we look at the hard numbers, that’s not the case,” said Greg Skomal, a state biologist in Massachusetts who has studied white sharks closely.

July saw far fewer shark sightings than a year ago, possibly due to a cooler spring in the Northeast, he said. Shark activity has since picked up in August.

Skomal spoke recently while boarding a research vessel in Chatham for a twice weekly shark survey, aided by a spotter plane. Dozens of animals have been tagged with electronic tracking devices so their migratory behavior can be studied.

Skomal’s team identified 80 sharks off Cape Cod in 2014, 141 the following year and 146 in 2016. A current year tally won’t be available until fall, but he said there was evidence that great whites were spreading out to cover most of the Cape’s eastern coast.

Ronald Beaty, a county commissioner, cited “a clear and present danger to human life,” while suggesting last week that baited drum lines be used to capture and then kill great whites. The suggestion drew swift and widespread condemnation from scientists and conservationists. The Barnstable County Commission has no plans to discuss such an idea.

In 2015, the state Division of Marine Fisheries issued regulations prohibiting people without special permits from attracting or capturing white sharks through activities such as cage diving, baiting or feeding. Shark advisory signs are posted at some beaches and shark brochures are available at visitor centers.

Skomal noted one possibly reassuring aspect to the blood-in-the-water incident at Nauset Beach.

“We had people who were surfing, we had swimmers, and we had a shark attack a seal among them all,” he said. “That’s a level of selection that we need to realize. The shark decided the seal was the prey item.”

“But sharks do make mistakes,” he added.