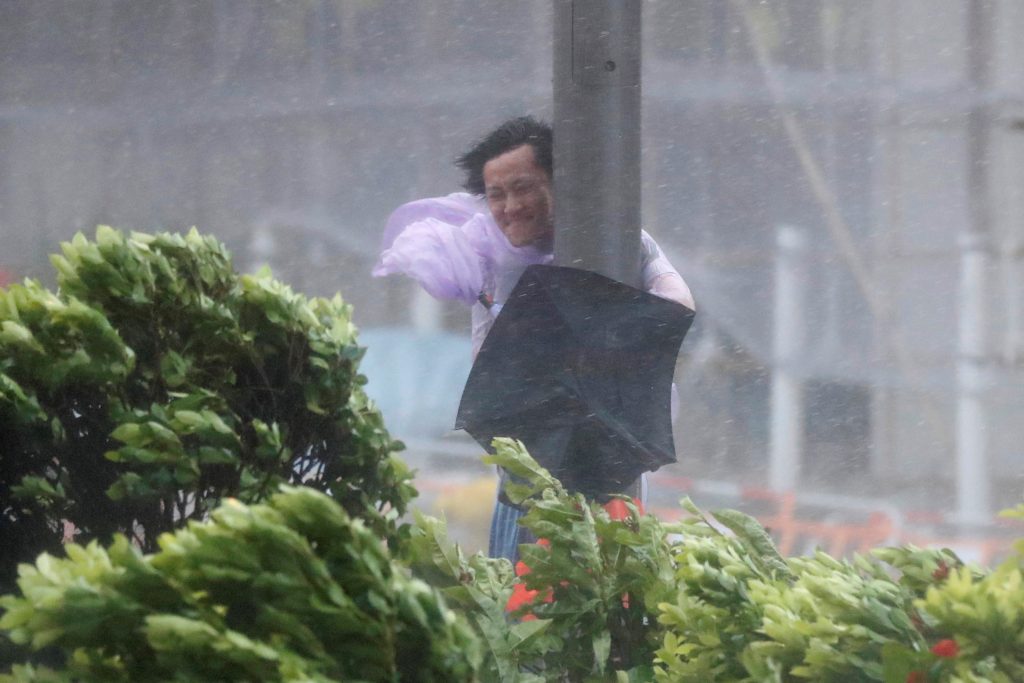 Typhoon Hato, a maximum category 10 storm, slammed into Hong Kong on Wednesday lashing the Asian financial hub with wind and rain that uprooted trees and forced most businesses to close, while in some places big waves flooded seaside streets.

There were reports of 34 people injured in Hong Kong while in the city of Macau, across the Pearl River estuary, three people were killed, authorities there said.

In Hong Kong, more than 450 flights were cancelled, financial markets suspended and schools closed as Hato bore down, the first category 10 storm to hit the city since 2012.

“I’ve never seen one like this,” Garrett Quigley, a longtime resident of Lantau Island to the west of the city, said of the storm.

“Cars are half submerged and roads are impassable with flooding and huge trees down. It’s crazy.”

Many skyscrapers in the usually teeming streets of Hong Kong were empty and dark as office workers stayed at home.

Hato, which means “sky pigeon” in Japanese, churned up Hong Kong’s Victoria Harbour and triggered large swells and big waves on some of the city’s most popular beaches, with serious flooding in low-lying areas.

In residential districts such as Heng Fa Chuen on densely populated Hong Kong Island, waves smashed against the sides of oceanfront buildings and surged over a promenade, sweeping away walls and benches and swamping vehicles parked nearby.

Construction cranes swayed at the tops of skyscrapers, windows imploded and nearly 200 trees were uprooted, while some people used canoes to venture out into flooded streets.

Authorities downgraded the storm to a category three by late-afternoon with government services, the courts, financial markets and companies set to resume normal business on Thursday.

The storm also caused a power blackout across most of Macau for about two hours, residents said, with disruption to cellphone and internet networks. There was severe flooding on the streets, with some cars almost completely submerged, and the water supply was affected in some districts. The three men who died included a 45-year-old Chinese tourist who was hit by a heavy truck, according to a government statement.

Thousands of residents along the Chinese coast were evacuated and fishing vessels were called back to port.

Maximum winds near Hato’s centre were recorded at a destructive 95 mph as it continued to move west across Guangdong in the general direction of Hainan island.

A senior scientific officer for the Hong Kong observatory warned that sea levels could rise several meters in some places, with the government issuing flood alerts and opening 27 shelters across the city.

Trading in Hong Kong’s financial markets was halted for the day, the stock exchange said. Typhoon Nida in August last year was the last storm to close the exchange for the whole day.

The city’s flagship carrier, Cathay Pacific, and Hong Kong Airlines canceled the majority of their flights to and from Hong Kong between Tuesday night and Wednesday morning.

Other transport services, including ferries to Macau and outlying islands in Hong Kong, were suspended.