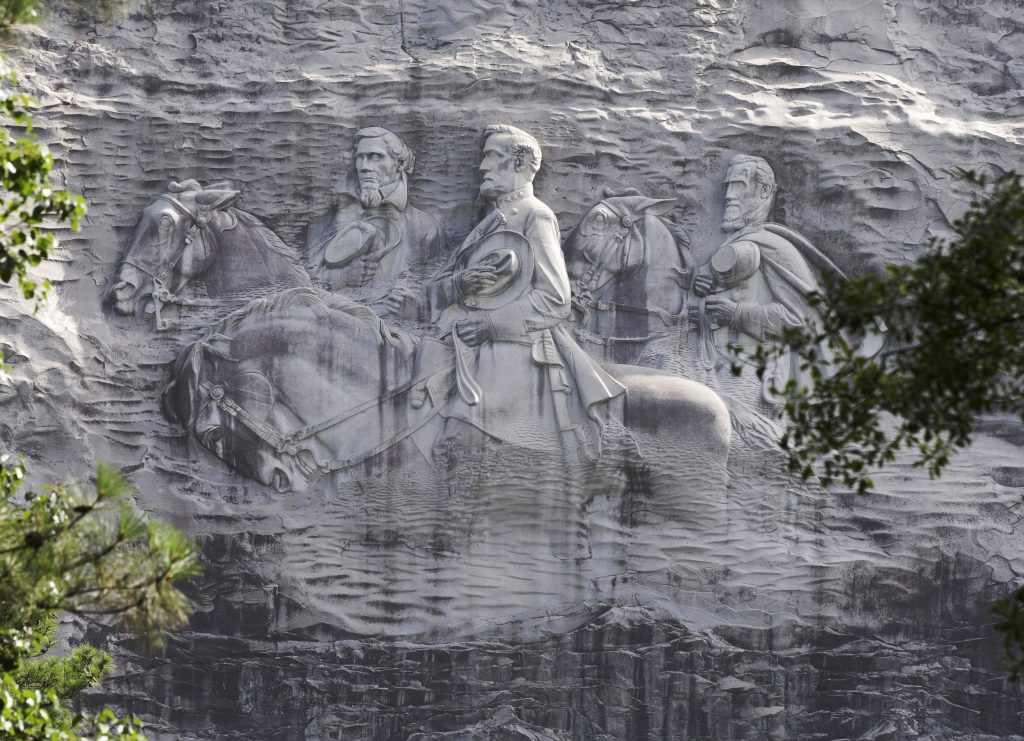 The huge raised-relief images show a Confederate trinity sitting astride their horses, high above the ground. Hats held across their chests, President Jefferson Davis and Gens. Robert E. Lee and Thomas “Stonewall” Jackson ride across the face of Stone Mountain into faded glory.

Part theme park and part shrine to Dixie’s Lost Cause, this granite outcrop east of Atlanta — sculpted like a Mount Rushmore of the Confederacy — is once again an ideological battlefield as a new fight rages over rebel symbolism across the South.

In the aftermath of the Aug. 12 white-nationalist rally in Charlottesville, Virginia, a Democratic candidate for Georgia governor said the carving should be removed. But removal would probably mean destroying a work of public art that took decades to complete and is the centerpiece of one of Georgia’s biggest tourist destinations.

The images carved into the mountain, “like Confederate monuments across this state, stand as constant reminders of racism, intolerance and division,” Stacey Abrams wrote in an email to supporters following the violence in Charlottesville. Abrams is vying to become the nation’s first black female governor.

Gazing up at the carving Thursday with out-of-town guests, Leila Finn and Sandra Neuse, white women from nearby Avondale Estates, said they visit Stone Mountain for the hiking trails and other park amenities. They see the carving as a curiosity.

“I think it would be more productive to use it as a talking point for education than to just get rid of it,” Finn said, quickly adding, “I wouldn’t mind if they took down some of the flags.”

John Purpera, who’s white, stopped Thursday at Stone Mountain with his wife and son while driving from their home in Port St. Lucie, Florida, to St. Louis to see Monday’s solar eclipse. Originally from Louisiana, he opposes the removal of Confederate statues.

“The people that want it removed should be shot,” he said. “It’s part of history, and you shouldn’t just delete parts of history you don’t like.”

Even if Abrams wins the nomination and beats the odds next year to become governor of this red state, it’s unlikely she would be able to get the carving removed. State law says it “shall never be altered, removed, concealed or obscured in any fashion and shall be preserved and protected for all time as a tribute to the bravery and heroism of the citizens of this state who suffered and died in their cause.”

That language was part of a compromise in a 2001 law that changed the state flag from one that included the Confederate battle flag.

It would be extremely difficult to muster enough support in the Georgia General Assembly to change the law, University of Georgia political science professor Charles Bullock said.

“That’s going to be a lot harder than pulling down a statue,” he quipped.

Those who want Confederate symbols removed often say they belong in a museum where there’s explanation and context, not prominently displayed on public lands. The Stone Mountain Memorial Association, which manages Stone Mountain Park, argues the park serves precisely that purpose.

Lining the massive lawn stretching out from the mountain’s base — where families gather with picnics to watch a laser show projected onto the mountain — is a series of individual brick terraces, one for each Confederate state. A plaque notes the dates of the state’s secession and of its readmission to the Union.

The white-columned Memorial Hall at the top of the lawn houses full-scale reproductions of parts of the carving so visitors can get a better sense of its size — 90 feet (27 meters) by 190 feet (58 meters). Another section explores local history, with exhibits on the Civil War that do not delve deeply into the war’s causes or touch on later controversies.

In 2015, when the massacre of nine black worshippers at a Charleston, South Carolina church by a white supremacist gunman led to calls to remove Confederate memorials, the Stone Mountain association considered adding a memorial to civil rights leader Martin Luther King Jr. But the plan was dropped after it ran into resistance from both those who identify with King and those who honor the Confederacy.

The first sketches for the carving were drawn up in 1915 at the request of the United Daughters of the Confederacy. That same year, the Klan experienced a rebirth with a Thanksgiving night cross burning atop Stone Mountain.

For decades thereafter, Stone Mountain was the site of an annual KKK cross burning.

Because of funding problems and other issues, the carving was not completed until 1972.

Georgia Historical Society historian Stan Deaton said it’s significant that the monument was begun as the KKK was reborn and completed following the civil rights movement and desegregation. He said many Southern politicians still chafed at changes imposed by what they considered an intrusive federal government.

“As a segregated society is coming to an end, we’re going to forever enshrine these three Confederate heroes on the front of this mountain as a kind of perpetual middle finger, if you will, to the federal government,” Deaton said.

The Sacred Knights of the Ku Klux Klan applied last May for a permit to hold a “lighting ceremony” on top of the mountain on Oct. 21 to commemorate the 1915 burning.

In a letter last week denying the permit, the Stone Mountain Memorial Association cited a disruptive 2016 clash between a white nationalist group and opponents at the park. The association “condemns the beliefs and actions of the Ku Klux Klan” and believes denying the permit “is in the best interest of all parties and is the appropriate course of action,” it said in a statement.

As Donald Smith and Anna Hardeman, who live just south of Atlanta in College Park and are both black, contemplated hiking the trail that goes up the back of the mountain to the summit Thursday, they said they would like to see the carving removed.

“It’s a reminder of a time you don’t want to be reminded of,” Hardeman said.

But Smith said he wondered if removing Confederate monuments might just sow more division. Noting that as soon as he entered the park, he had to turn onto Robert E. Lee Boulevard, he mused on a childhood adage.