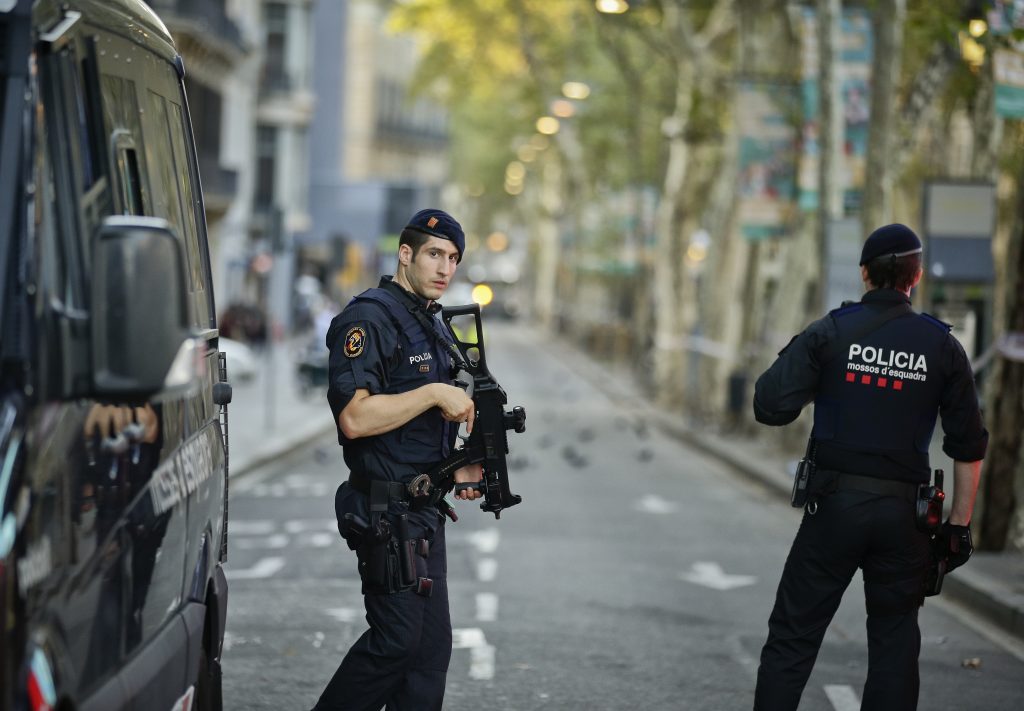 The back-to-back vehicle attacks in Barcelona and a nearby resort had been planned for a long time by an Islamic terrorist cell — and could have been far deadlier had its base not been destroyed by an apparently accidental explosion this week, Spanish officials said Friday.

Police intensified their manhunt for an unknown number of suspects still on the loose Friday. They shot and killed five people early Friday who were wearing fake bomb belts as they attacked the seaside resort of Cambrils with a speeding car. Police also arrested four others believed linked to the Cambrils attack and the carnage Thursday on a famous Barcelona promenade.

The number of victims stood at 13 dead and 120 wounded in Barcelona, and one dead and five wounded in Cambrils. Sixty-one people wounded by the van in Barcelona remained hospitalized on Friday, with 17 of them in critical condition.

Authorities said the two attacks were related and the work of a large terrorist cell that had been plotting attacks for a long time from a house in Alcanar, about 125 miles down the coast from Barcelona. The house was destroyed by an explosion of butane gas on Wednesday night that killed one person.

Senior police official Josep Lluis Trapero said police were working on the theory that the suspects were preparing a different type of attack, using explosives or gas, and that the apparently accidental explosion prevented them from carrying out a far more deadly rampage.

Islamic State quickly claimed responsibility for Europe’s latest bout of extremist violence, in which a van roared down Barcelona’s historic Las Ramblas promenade on Thursday. Hours later, a blue Audi plowed into people in the popular seaside town of Cambrils.

Spanish Prime Minister Mariano Rajoy declared Friday that the fight against terrorism was a global battle and Europe’s main problem.

Police said they arrested two more people Friday, after an initial two were arrested Thursday — three Moroccans and one Spaniard, none with terrorism-related records. Three of them were nabbed in the northern town of Ripoll. Another arrest was made in Alcanar.

“We are not talking about a group of one or two people, but rather a numerous group,” regional Interior Ministry chief Joaquim Forn told Onda Cero radio.

Amid heavy security, Barcelona tried to move forward Friday, with its iconic Las Ramblas promenade quietly reopening to the public and King Felipe VI and Rajoy joining thousands of residents and visitors in observing a minute of silence in the city’s main square.

But the dual attacks unnerved a country that hasn’t seen an Islamic terror attack since 2004, when al-Qaida-inspired bombers killed 192 people in coordinated assaults on Madrid’s commuter trains. Unlike France, Britain, Sweden and Germany, Spain has largely been spared, thanks in part to a crackdown that has netted some 200 suspected jihadis in recent years.

Authorities were still reeling from the Barcelona van attack when police in the popular seaside town of Cambrils, 80 miles to the south, fatally shot five people near the town’s boardwalk who had plowed into tourists and locals with their car. Forn said the five were wearing fake bomb belts.

One woman in Cambrils died Friday from her injuries, Catalan police said. Five others were injured.

Cambrils Mayor Cami Mendoza said the town had taken precautions after the Barcelona attack, but the suspects focused their attack on the narrow path to the boardwalk, which is usually packed.

“We were on a terrace,” said bystander Jose Antonio Saez. “We heard the crash and intense gun shots, then the dead bodies on the floor, shot by the police.”

Others described scenes of panic, and found safety inside bars and restaurants until police had secured the area.

Resident Markel Artabe was heading out to get an ice cream when he heard the shots.

“We began to run. We saw one person lying on the pavement with a shot in his head, then 20 to 30 meters farther on we saw two more people, who must have been terrorists as they had explosive belts around them,” he said. “We were worried so we hid.”

Regional police say the Cambrils suspects, armed with knives and an ax, wounded one person in the face with a knife before they were killed by police.

The Cambrils attack came hours after a white van mowed down pedestrians on Barcelona’s picturesque Las Ramblas promenade, leaving victims sprawled across the street, some writhing in pain from broken limbs. Others were ushered inside shops by officers with guns drawn or fled in panic, carrying young children in their arms.

“It was clearly a terror attack, intended to kill as many people as possible,” Trapero said.

The Islamic State terror group said on its Aamaq news agency that the Barcelona attack was carried out by “soldiers of the Islamic State” in response to its calls for followers to target countries participating in the coalition trying to drive the group from Syria and Iraq.

The dead and wounded in the two attacks hailed from 34 countries. Two Italians, an American and a Belgian woman were among the dead, officials said.

Spanish public broadcaster RTVE and other news outlets named one of those detained in the Barcelona attack as Driss Oukabir, a French citizen of Moroccan origin. RTVE reported that Oukabir went to police in Ripoll to report that his identity documents had been stolen. Spanish media said documents with his name were found in the attack van and that he claimed his brother might have stolen them.

Citing police sources, Spain’s RTVE as well as El Pais and TV3 identified the brother, 17-year-old Moussa Oukabir, as the suspected driver of the van. Forn declined to respond to questions about him Friday.

“We don’t know if the driver is still in Barcelona or not, or what direction he fled in,” Forn told SER Radio.

Forn said the police were trying to identify the five dead attackers in Cambrils as well as the driver of the Barcelona van.

“There could be more people in Ripoll connected to the group,” he said, adding that the two attacks “follow the same trail. There is a connection.”

Rajoy called the killings a “savage terrorist attack” and said Spaniards “are not just united in mourning, but especially in the firm determination to beat those who want to rob us of our values and our way of life.”

By Friday morning, Las Ramblas promenade had reopened to the public, albeit under heavy surveillance and an unusual quiet.

“It’s sad,” New York tourist John Lanza said, as his family stood outside the gated La Boqueria market. “You can tell it’s obviously quieter than it usually is, but I think people are trying to get on with their lives.”

At noon Friday, a minute of silence honoring the victims was observed at the Placa Catalunya, near the top of Las Ramblas, where the van attack started. The presence of Spain’s king and prime minister alongside Catalonia’s regional authorities marked a rare moment when the question of Catalonian independence — the subject of a proposed Oct. 1 referendum — didn’t divide its people.

Since the Madrid train bombings, the only deadly attacks in Spain had been bombings claimed by the Basque separatist group ETA that killed five people over the past decade. It declared a ceasefire in 2011.

“Unfortunately, Spaniards know the absurd and irrational pain that terrorism causes. We have received blows like this in recent years, but we also know that terrorists can be beaten,” Rajoy said.